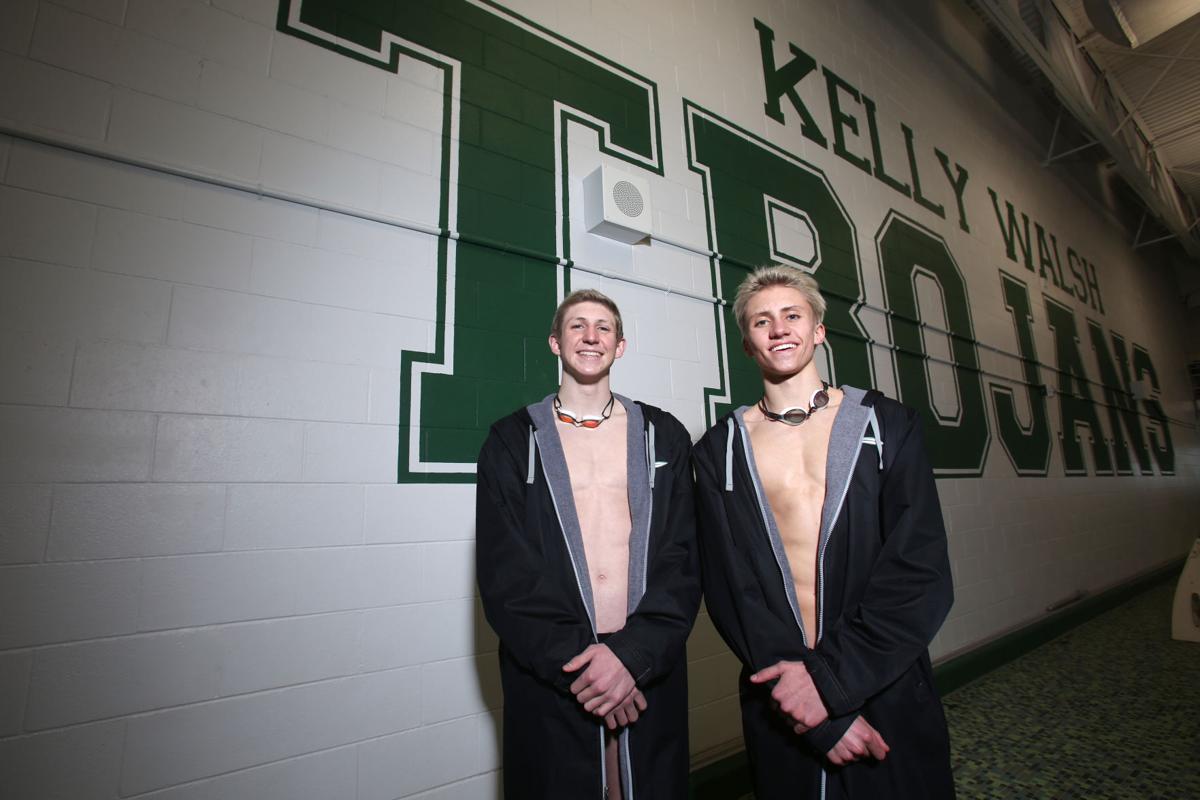 Kelly Walsh senior swimmers Carter Mahoney, left, and Braden Lougee pose for a portrait on Feb. 10 at the Kelly Walsh pool in Casper. 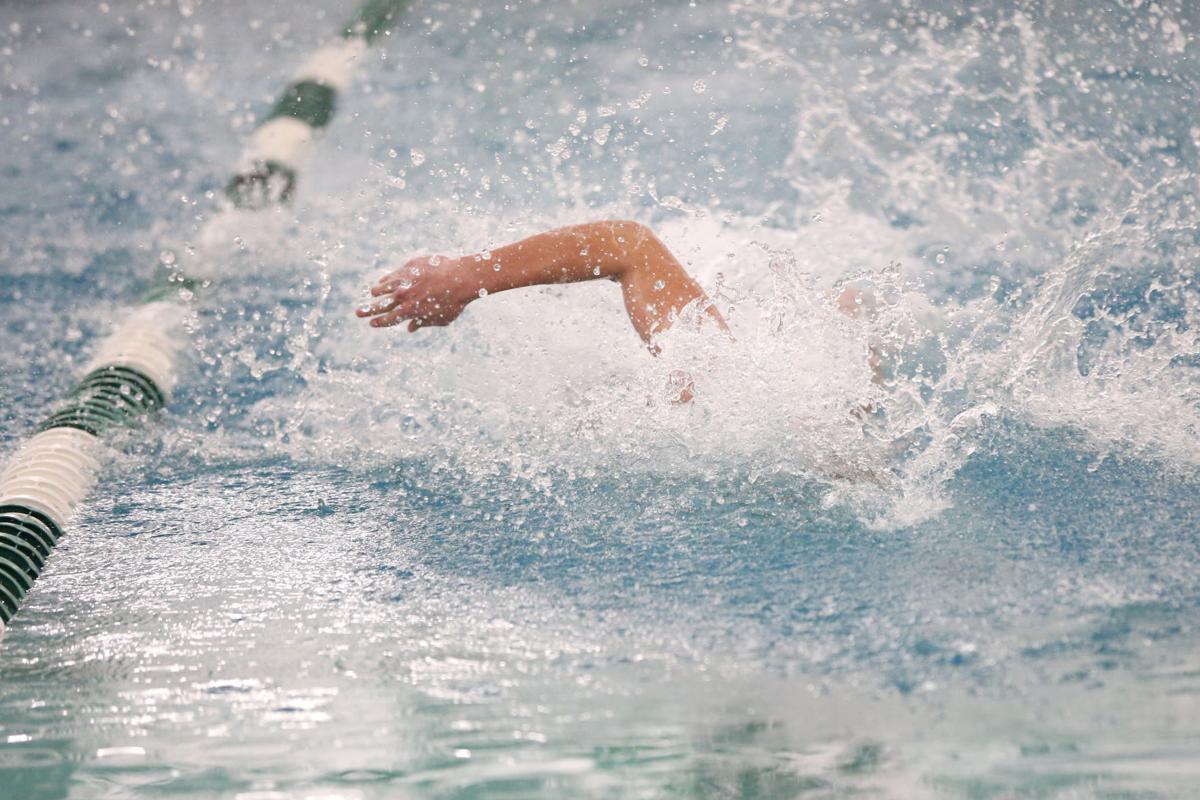 Kelly Walsh's Carter Mahoney competes in the 50-yard freestyle at the Fish Bowl at the Kelly Walsh pool on Jan. 30 in Casper. 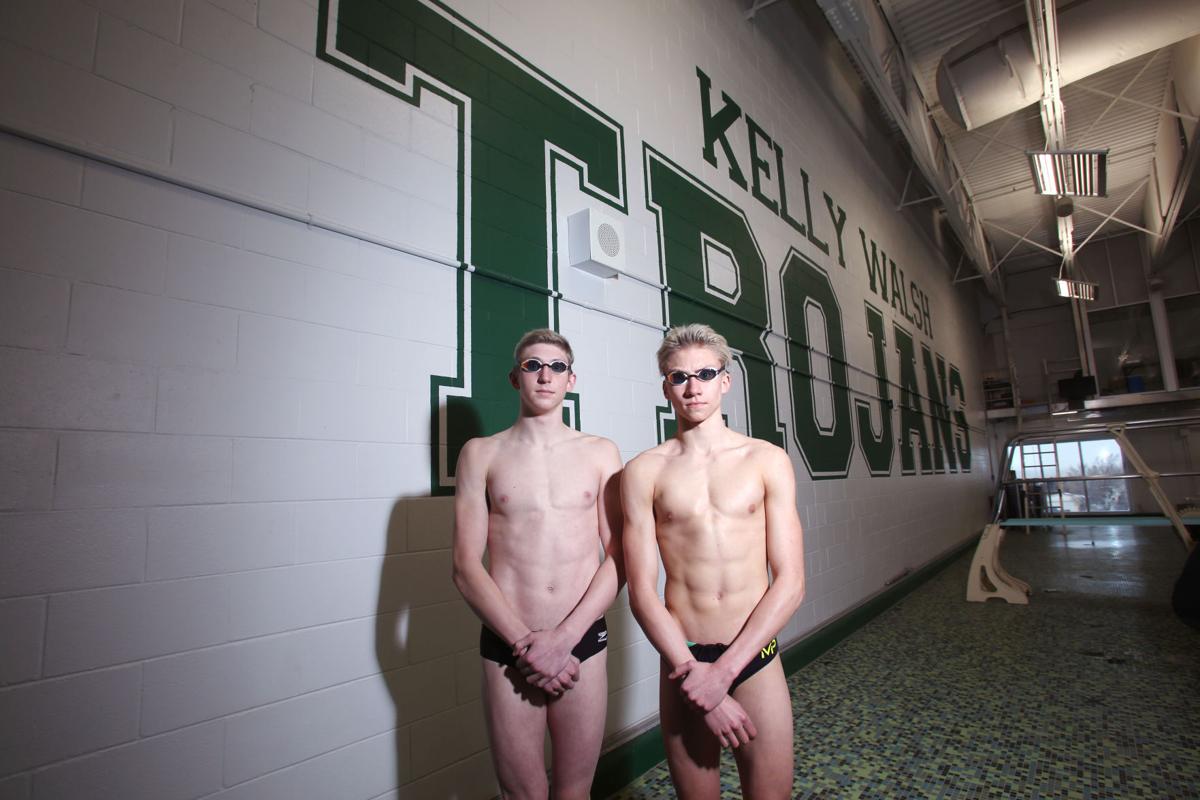 Kelly Walsh senior swimmers Carter Mahoney, left, and Braden Lougee pose for a portrait at the Kelly Walsh pool on Feb. 10 in Casper.

After finishing third at the Class 4A state swimming and diving championships each of the last five years, Kelly Walsh is poised to return to the podium for the first time since winning back-to-back titles in 2014-15. With Braden Lougee and Carter Mahoney headlining a solid senior class, the Trojans enter this weekend’s state meet with their sights set on dethroning three-time defending state champ Laramie.

“This has been a special year and we want to send these guys out with a bang,” KW head coach Bridger Miller said last week. “It’s always fun to watch these bigger senior classes grow and kind of make this program their own and turn it into the team they want it to be.”

While multi-team invitationals were scrapped this year because of COVID-19 concerns, Kelly Walsh has defeated Laramie twice this season. At the 4A West regional meet two weeks ago, the Trojans won the final event -- the 400 freestyle relay -- to edge the Plainsmen 437-435. KW enters the state meet with 4A’s fastest times in both the 400 free relay (3 minutes, 20.99 seconds) and the 200 free relay (1:30.83) and owns the No. 2 mark behind Cheyenne Central in the 200 medley relay.

“We have a lot of strength in our relays and I think that will be an advantage for us,” Miller stated.

With Lougee and Mahoney leading the charge, the Trojans also expect to have an advantage in the sprints.

After top-five finishes at last year’s state meet, both have been even more impressive this season.

“For me, I just tried to have fun and not put as much pressure on myself,” Mahoney said. “Last year we talked about winning state and when we went out there we felt like we had to win everything. This year I’m having fun and trying to get the whole team involved in practices and meets. And I think we’ve been swimming faster because of all that.”

Added Lougee: “We came into this season with no expectations, so I am ecstatic with how we’ve done. We all had the attitude of we just wanted to get better and be the best Trojan senior class that we could be. And I think we’ve done that.”

While neither Lougee nor Mahoney began their high school careers as standouts, the work they’ve put in in the offseason has them in position to finish as state champions.

“They’ve come a long way since they were freshmen and started in our beginner lanes,” Miller said. “They’ve grow as athletes and leaders and they’re two of the premier sprinters in the state.

“They’ve gotten stronger and more explosive, but I would say mentally is where they’ve grown the most this year. They’re confident, they love to compete and they don’t back down from adversity or challenges.”

As the Trojans’ senior leaders, Lougee and Mahoney are quick to credit each other and their teammates for their successes in the pool.

“I would not be as fast as I am without Carter,” Lougee admitted, “and I know Carter would say the same thing about me. We race each other every day in practice and we’re constantly competing against each other. I’ve never had more fun than when I’m racing Carter.”

Mahoney nodded in agreement before shifting his attention to the other Trojans.

“My teammates have forced me to focus on the little things,” he said, “whether it’s having a better streamline off the wall or if I’m not trying they’ll be sure to put me in my place. They have pushed me in practice and it’s helped make me the swimmer I am.”

In addition, the Trojans are counting on their depth to be a factor in the team race. While Lougee and Mahoney are expected to be battling for the top of the podium, it’s the swimmers that make their way into the consolation finals that could prove to be the difference.

“Even if Braden and I win all of our races we have no chance of winning as a team without those guys,” Mahoney said of his teammates. “All those guys may not get a medal or be able to stand up on the podium, but it’s those two or three points here or there that are going to push us above and beyond.”

Unlike in recent years, there is no clear favorite in the team race, although Kelly Walsh, Laramie and Cheyenne Central look to be the teams to beat.

TOP OF THE CHARTS: With seniors Braden Lougee and Carter Mahoney leading the way, Kelly Walsh is in position to end Laramie's three-year reign as Class 4A state champion.

HE SAID IT: "It's going to come down to the wire." -- KW head coach Bridger Miller.

INSIDE: State championship schedules, Page B2.

Tigers' streak is the fifth-longest in the country and the longest current streak.

Kelly Walsh senior swimmers Carter Mahoney, left, and Braden Lougee pose for a portrait on Feb. 10 at the Kelly Walsh pool in Casper.

Kelly Walsh's Carter Mahoney competes in the 50-yard freestyle at the Fish Bowl at the Kelly Walsh pool on Jan. 30 in Casper.

Kelly Walsh senior swimmers Carter Mahoney, left, and Braden Lougee pose for a portrait at the Kelly Walsh pool on Feb. 10 in Casper.