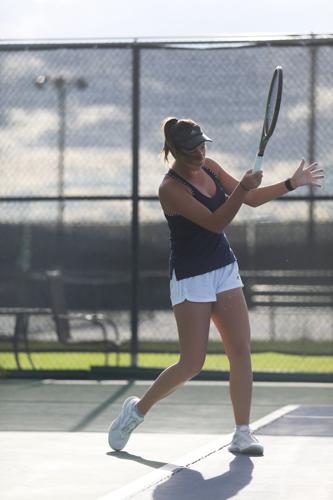 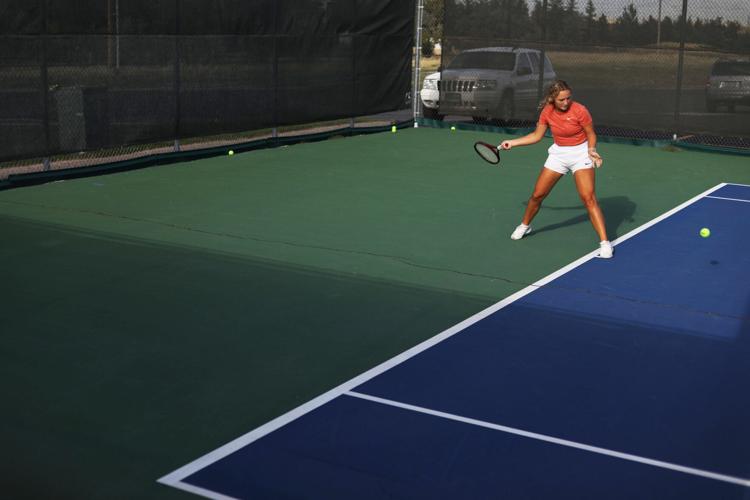 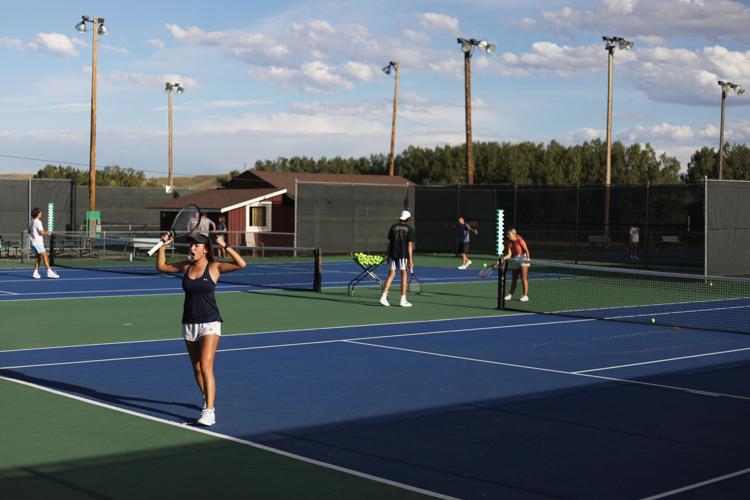 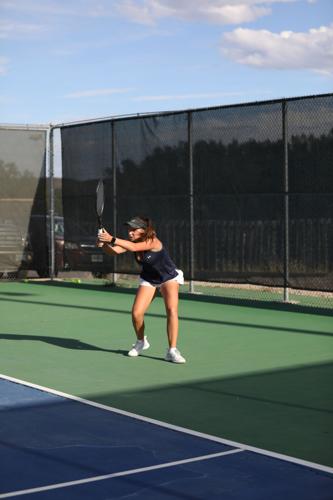 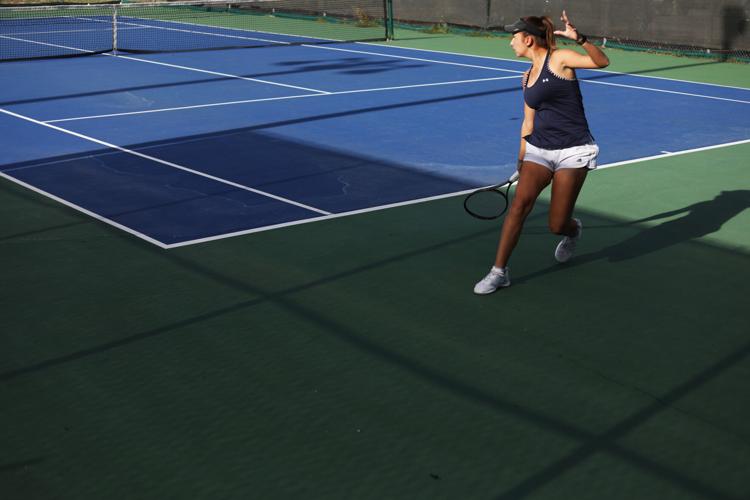 Kelly Walsh's Gabriella Blumberg follows through after hitting a backhand return during practice Tuesday at the Casper Country Club. 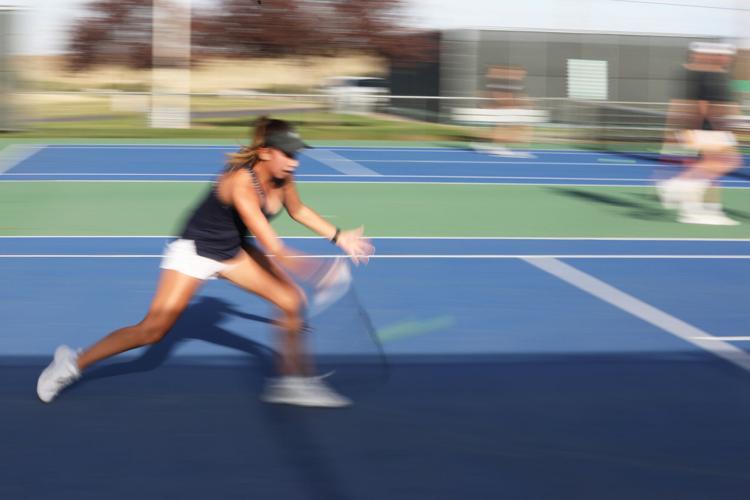 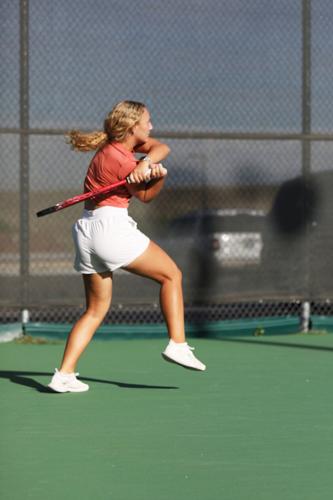 Kelly Walsh senior Avery Strand follows through after hitting a backhand return during practice Tuesday at the Casper Country Club. 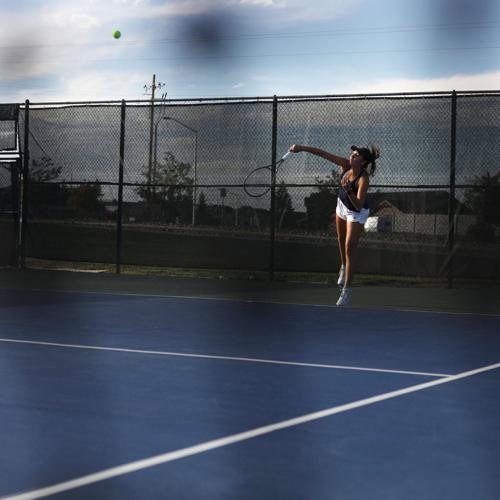 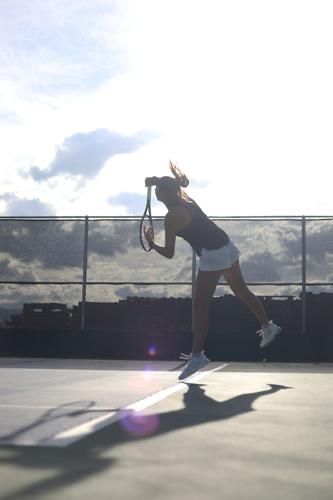 A trip to California two years ago continues to pay dividends for Gabriella Blumberg. The Kelly Walsh senior tennis standout visited the Southern California Tennis Academy during her Thanksgiving break when she was a sophomore and hasn’t lost a match in Wyoming since.

Blumberg enters this weekend’s Wyoming State High School Tennis Championships in Gillette undefeated (16-0) at No. 1 singles. Last year she went 20-0 at No. 2 singles to help lead the Trojans to their first team title in 14 years.

Blumberg and fellow sophomore Avery Strand had success in 2020, finishing third at No. 1 doubles. Already looking ahead to her final two years of high school, Blumberg was ready for the next challenge.

“When I was very young I knew I wanted to be in sports competitively,” Blumberg said at a recent Kelly Walsh practice. “And when Leland Dexter, my coach in Casper, moved to California he introduced me to the academy.

“I went there for a week and absolutely fell in love with the idea (of training there),” she added. “I would love to play collegiately and I met people who had the same mindset as me.”

So from January to June the past two years Blumberg has trained at the SCTA while taking classes online. The experience she’s gained playing against elite-level competition has helped Blumberg go 72-1 in sets played in Wyoming the past two years.

“Playing in California definitely made me better,” Blumberg admitted, “but it was also a humbling experience. I knew I was pretty good for Wyoming but when I went there I found out I needed to learn a lot more.

“I think I finally figured out that I don’t really need to do big things,” she added. “I just have to be smart in how I play. Sometimes I’m beating myself more than anybody else is beating me.”

Blumberg’s success is emblematic of the team’s success in recent years. Kelly Walsh has won the North Regional title the past five years and finished second at state in 2020 before sweeping its way to the top of the podium last year.

It’s been a long trip to the top for KW head coach Buddy Johnson, who also saw the boys’ team win the past two state titles.

“When I started 13 years ago I would get freshmen and sophomores who had never really played tennis,” he said. “And now when I get them their strokes are already established.”

For Strand, the move from playing singles after spending the past two years playing doubles was a challenge in the beginning.

“At first I was a little nervous and I was wondering what it would be like to be on my own,” she said. “But I feel like I’ve made myself mentally stronger and I’m able to calm myself down during a match. I’ve worked really hard, and with that comes trust in my game.”

And if Strand ever has questions she can always turn to Blumberg for advice.

“Having her here has been great because she’s really technical and she knows what I can do to beat whoever I’m playing,” Strand said. “She’s like a mentor to me.”

Blumberg credits former Trojan Finley Klinger, who was state runner-up twice and won No. 1 singles last year, for instilling that belief in teamwork and camaraderie in her.

“I learned that from Finley,” Blumberg said. “She taught me how to be a leader and be a captain. Now we’re trying to pass it down to our younger teammates.”

“I feel more responsible for our team,” she said. “Finley passed it down to us and now we’re going to pass it down to Ella and Harper and Taylor. We’re excited to see what they can do next year.”

Before then, though, the Trojans hope to add another state championship to the trophy case. If they do, Blumberg will even be around to admire it this winter.

“This year I’m actually going to stay in Casper the second semester,” Blumberg said with a smile. “My parents really wanted me to enjoy my senior year, which is very understandable. And they would probably like some time with me before I go to college.”

SHE SAID IT: “Playing in California definitely made me better, but it was also a humbling experience. I knew I was pretty good for Wyoming but when I went there I found out I needed to learn a lot more." -- Blumberg.

Who has scored the most World Cup goals of all time?

Who has scored the most World Cup goals of all time?

Some prep coaches opt to pray, while others punt

Some prep coaches opt to pray, while others punt

Kelly Walsh's Gabriella Blumberg follows through after hitting a backhand return during practice Tuesday at the Casper Country Club.

Kelly Walsh senior Avery Strand follows through after hitting a backhand return during practice Tuesday at the Casper Country Club.