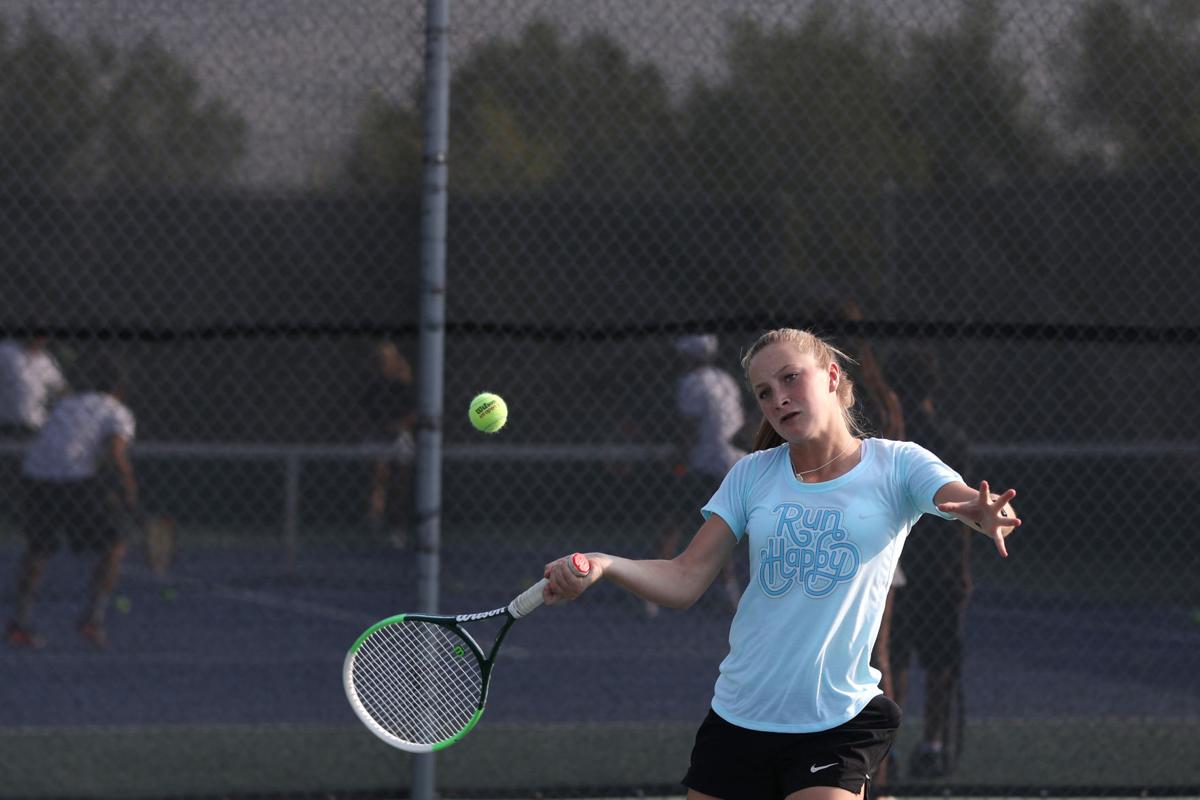 Finley Klinger, Kelly Walsh's No. 1 girls singles player, returns a shot during practice on Sept. 16 at the Casper Country Club. 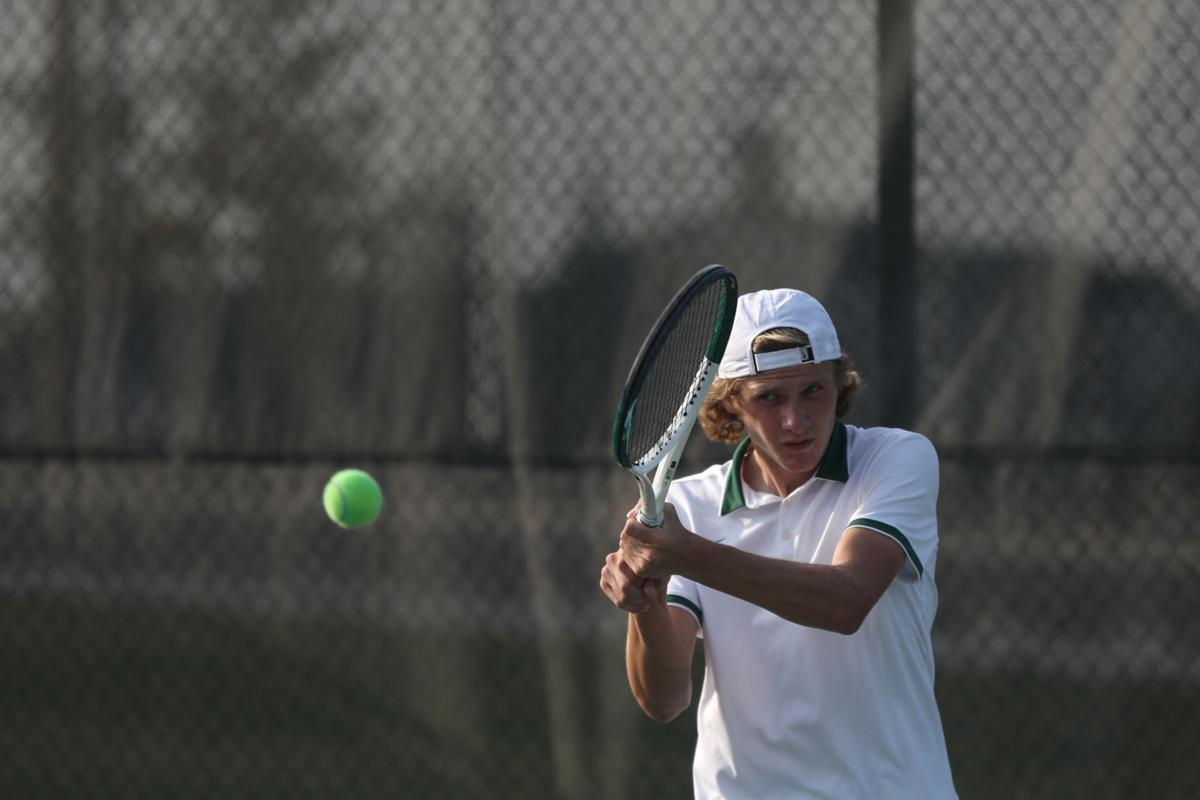 Austin Putnam, the Kelly Walsh boys No. 1 singles player, focuses on a return shot during practice on Sept. 16 at the Casper Country Club. 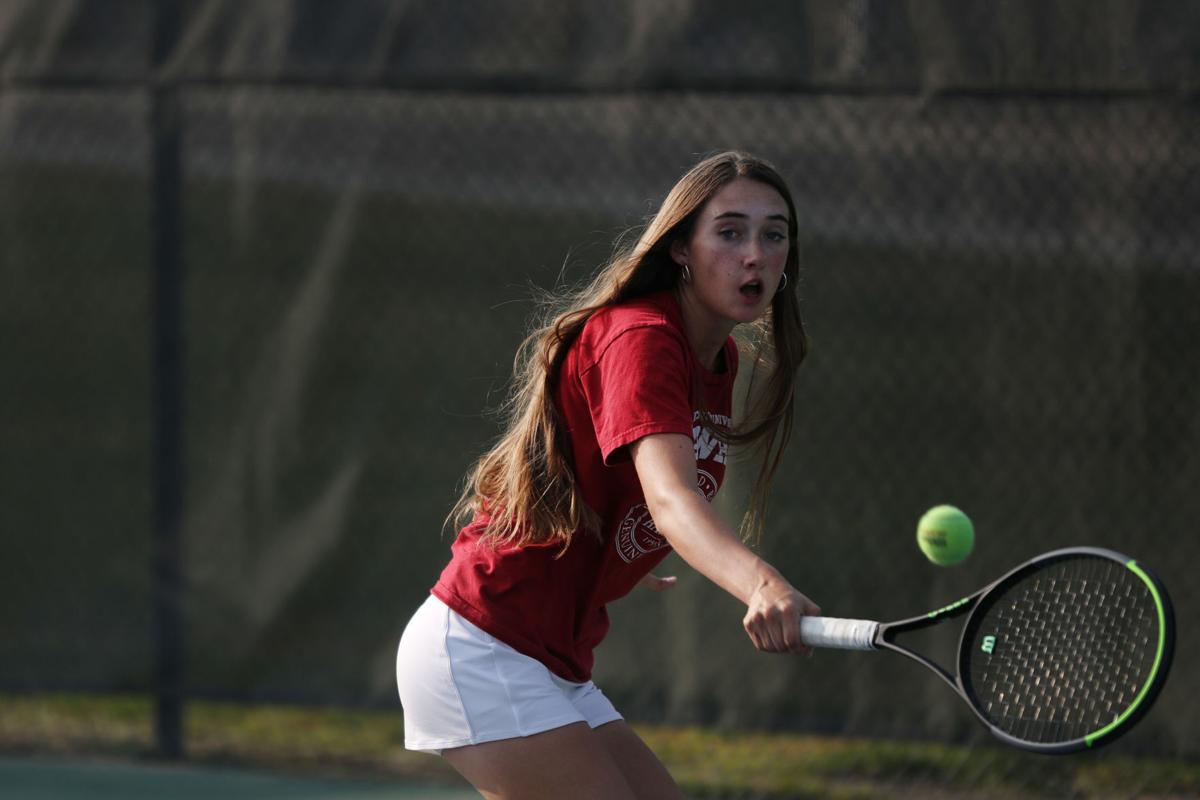 Kelly Walsh senior Lily Putnam, the Trojans' No. 2 singles player, hits a backhand shot to an opponent during practice on Sept. 16 at the Casper Country Club. 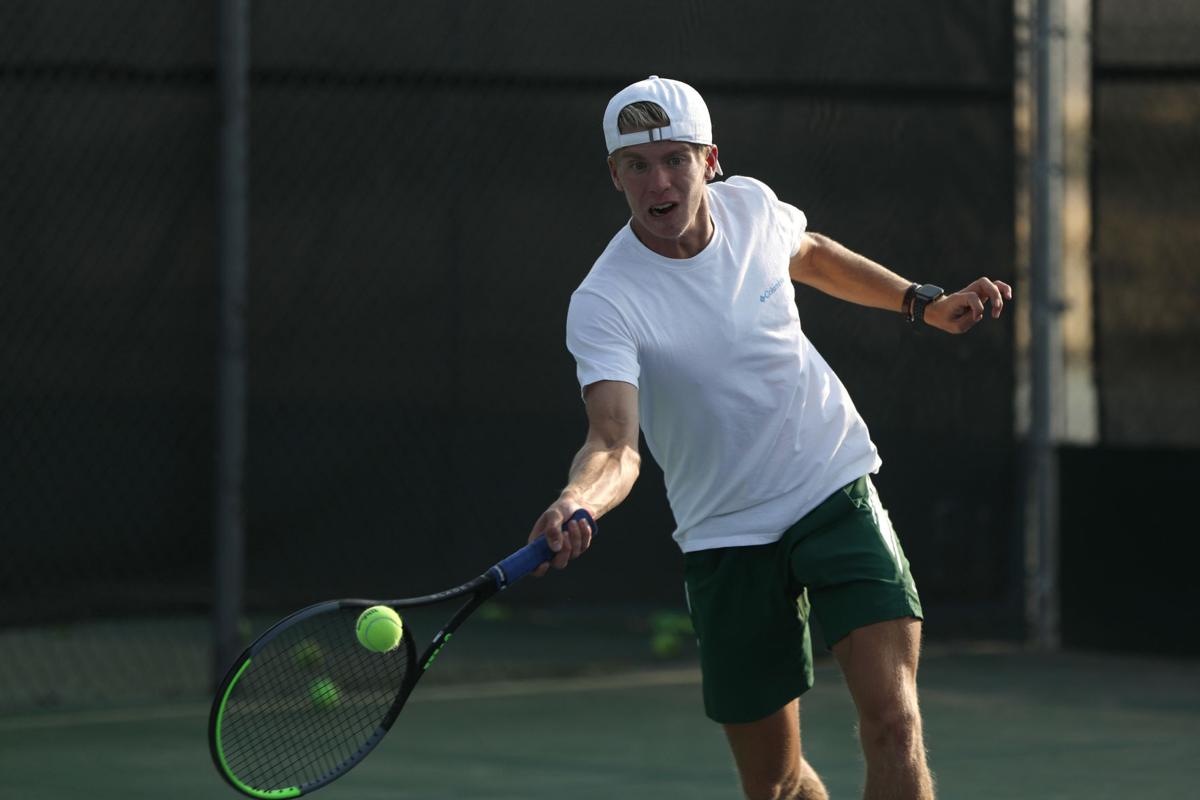 Kelly Walsh's Jackson Catchpole, the Trojans' No. 2 boys singles player, reaches for a forehand during practice Sept. 16 at the Casper Country Club. 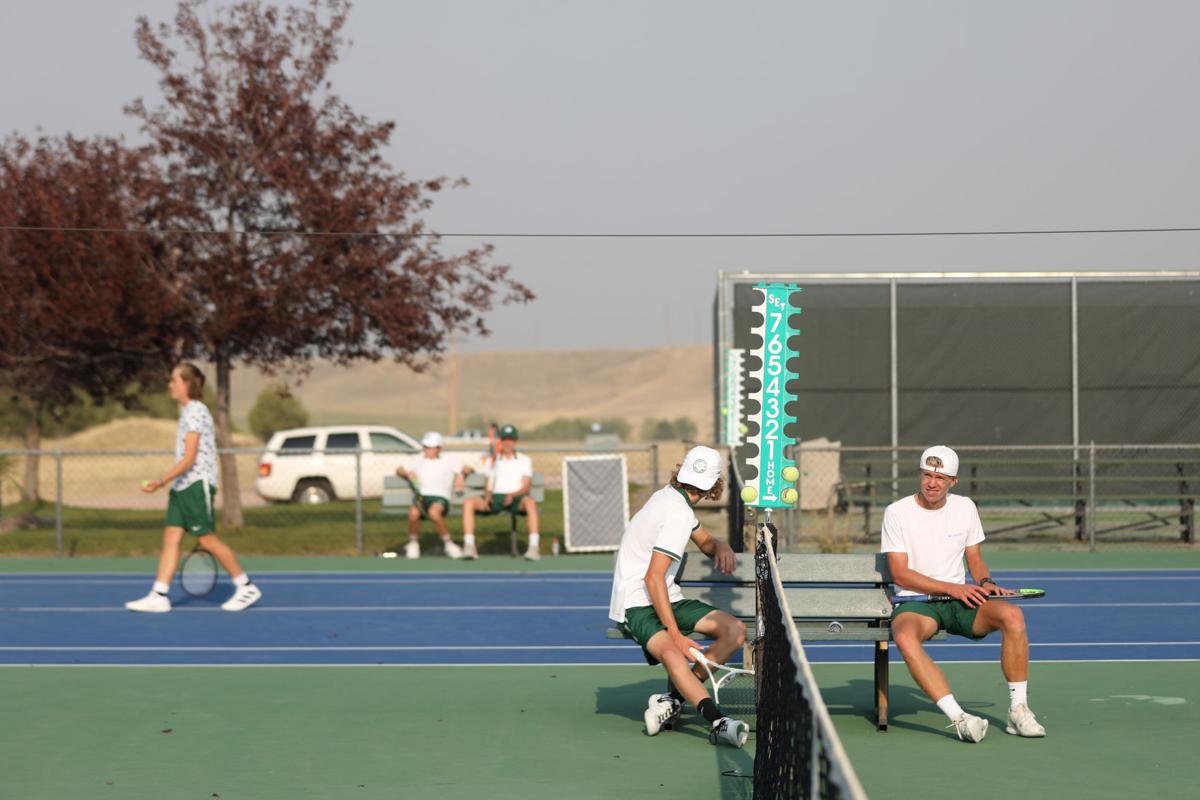 Kelly Walsh's Austin Putnam, left, and Jackson Catchpole wait on a bench for their turn to practice their singles game Sept. 16 at the Casper. Country Club.

The Kelly Walsh tennis teams are in uncharted territory entering this weekend’s Wyoming State High School Tennis Championship in Gillette. The Trojans are vying to become the first school to win outright boys’ and girls’ team titles since Gillette pulled it off 10 years ago. Cheyenne Central won both the state titles two years ago, but the boys’ team tied Jackson for the top spot.

But there is evidence that Kelly Walsh can accomplish the feat this weekend. The boys’ team is 16-0 this season and defeated runner-up Gillette by 10 points for the North Regional title last weekend. The girls team is 15-1 — its only loss was a 3-2 defeat to Central on Aug. 22 — and won four of five titles at the North Regional, topping second-place Cody by 22 points.

Making the Trojans’ success on the tennis courts this year even more impressive is that the girls’ team hasn’t won a team championship since 2007 and the boys’ only team title came in 1994.

“All I can say is they’ve put in a lot of time and hard work,” Kelly Walsh tennis coach Buddy Johnson said. “They all had the athletic ability, but they were still developing their tennis IQ.”

Austin Putnam and Jackson Catchpole had a rude awakening to high school tennis.

As freshmen two years ago, the now-juniors were the No. 1 doubles team for Kelly Walsh. They finished 4-7, their season ending with a two-set loss in the consolation bracket.

“My freshman year I would get so mad that I would beat the racket,” Catchpole laughed during a recent practice at the Casper Country Club. “Now I’m a lot calmer.”

“We’ve come a long way,” Putnam said. “A lot of it comes down to experience. We played No. 1 doubles on varsity our freshman year and didn’t do so well. Every year since then we’ve been focusing on different aspects of our game, and over time we’ve picked up the areas of our game that allowed us to win.”

Putnam and Catchpole are two of six Kelly Walsh juniors playing at state this weekend. Buck Harris and Drew Rasmussen are the No. 1 doubles team (14-3 on the season) and Parker Phillips and Alex Yakel are the No. 2 doubles team (13-1). The No. 3 doubles team is comprised of senior Colten Atkinson and sophomore Treydon Ward, who are 5-2 on the season. At regionals last week, Phillips and Yakel won the No. 2 doubles title while the pairings of Harris/Rasmussen and Atkinson/Ward both finished third. They all played a part in the Trojans’ third-place finish at state last year after Kelly Walsh was 11th in 2018.

“Two years ago when these boys were all freshmen they all took their lumps,” Johnson said. “They went out there and thought they were going to win all their matches, but a lot of it is just going out there and playing and getting that experience.”

“Two years ago they went out there and just wanted to see how they could do,” he added. “Now they all go into matches thinking, ‘I should win this match.’”

This year, that’s usually been the case.

The same holds true for the girls’ team.

Senior Lily Putnam, who plays No. 2 singles, is undefeated on the season, as is the No. 3 doubles team of freshmen Taylor Nokes and Ella Catchpole. Junior Finley Klinger’s only loss this season at No. 1 singles was a 3-2 defeat to defending state champion Emily Needham of Cheyenne Central; the No. 2 doubles team of junior Ava Allsop and sophomore Malan Wilson also have just one loss on the season; and the No. 1 doubles team of sophomores Gabriella Blumberg and Avery Strand dropped just four matches on the season.

The Trojans have been knocking on the door the past few seasons — finishing second in 2017 and ’18 and fourth last year — but believe they are ready to knock the door down this year and win that elusive state championship.

“For me personally, it would be like passing down a legacy because we’ve been so close the last three years,” Lily Putnam said.

Putnam was right there as well, finishing second at No. 2 singles last year and third in the same bracket as a sophomore.

Even though Putnam had success on the court the past few years, she knows her game has improved tremendously since her freshman year.

“My freshman year I could barely stand at the net and it was hard for me to get the ball over,” she said. “Now I can put the ball where I want, and that’s probably been where I’ve improved the most is placement on the court.”

While most players might credit an improved serve or better court awareness as keys to their success, Putnam believes her game is better now because she has grasped the mental aspect of the sport.

“Having a strong mental attitude is the foundation of tennis,” she said. “When I used to have a stressful match my mentality was just to totally shut down. But as I’ve gone through the years I’ve been able to be more patient in stressful matches.”

“I sort of figured out my sophomore year that winning the game is more important than believing that the point I was playing was the only one that mattered,” she added. “It doesn’t mean that you don’t try to win every point, but having the mentality that there is another point is really good to instill. That way you’re not getting angry all the time.”

Neither Lily Putnam nor Klinger have that hard edge to their games, but the way they push each other in practice has made both of them better.

Klinger has a booming serve and often overpowers opponents with her strong ground game. Putnam counters with consistency and the ability to get to nearly every shot an opponent tries to get past her. Together, they have pushed each other to the top of their games.

Added Klinger: “Lily and I push each other a lot because we play totally different styles.”

Their strong play at No. 1 and No. 2 singles has trickled down to the rest of the girls’ team. It’s that depth that makes the Trojans serious threats to dethrone three-time defending state champ Cheyenne Central.

“The girls are still young,” Johnson said, “but the sky’s the limit when you’ve got two really good players like Finley and Lily. When the other girls see how good those two are, it gives them something to shoot for.”

As the only senior on this year’s state-qualifying girls’ team, Putnam is doing what she can to help the younger Trojans in their quest to win a state championship.

“I usually play on a court that has two courts conjoined so that I can talk to the doubles team that is next to me,” she offered. “I tell them to just play their own game, be calm and relax. Younger players believe that every shot is the most important one, when it’s the whole game that matters.”

Three days in Gillette won’t determine if the 2020 Kelly Walsh tennis season was a successful one. The Trojans have already accomplished that with their play this fall. But bringing home a couple of state championship team trophies would be an added bonus.

“It would mean a lot because it would show how far we’ve come since our freshman year,” Austin Putnam said.

“Winning as a team would be awesome because we’ve been close the last few years,” Klinger added. “So to be the team that actually pushes through and does it would be really cool.”

And it would be a fitting tribute to former players who pushed the young Trojans in practice the past couple of years.

“If we were to win it would be like I was winning it for those girls I used to play with that have graduated,” Lily Putnam explained. “And it’s exciting because it gives the younger kids hope that Kelly Walsh can play at the highest level.”

SERVICE ACE: The boys team enters this weekend's state tournament 15-0 in duals this season while the girls team is 14-1.

HISTORIC RUN: The Trojans haven't won a boys team championship since 1994 and the last girls team title was in 2007.

HE SAID IT: “It would mean a lot because it would show how far we’ve come since our freshman year.” -- KW junior Austin Putnam, the Trojans' No. 1 singles player.

INSIDE: Results from Day of of the state tournament. Page B4

INSIDE: First-round brackets, Page B4.

Hot Or Not: Justin Fields will be next rookie QB to get first career win?

Finley Klinger, Kelly Walsh's No. 1 girls singles player, returns a shot during practice on Sept. 16 at the Casper Country Club.

Austin Putnam, the Kelly Walsh boys No. 1 singles player, focuses on a return shot during practice on Sept. 16 at the Casper Country Club.

Kelly Walsh senior Lily Putnam, the Trojans' No. 2 singles player, hits a backhand shot to an opponent during practice on Sept. 16 at the Casper Country Club.

Kelly Walsh's Jackson Catchpole, the Trojans' No. 2 boys singles player, reaches for a forehand during practice Sept. 16 at the Casper Country Club.

Kelly Walsh's Austin Putnam, left, and Jackson Catchpole wait on a bench for their turn to practice their singles game Sept. 16 at the Casper. Country Club.