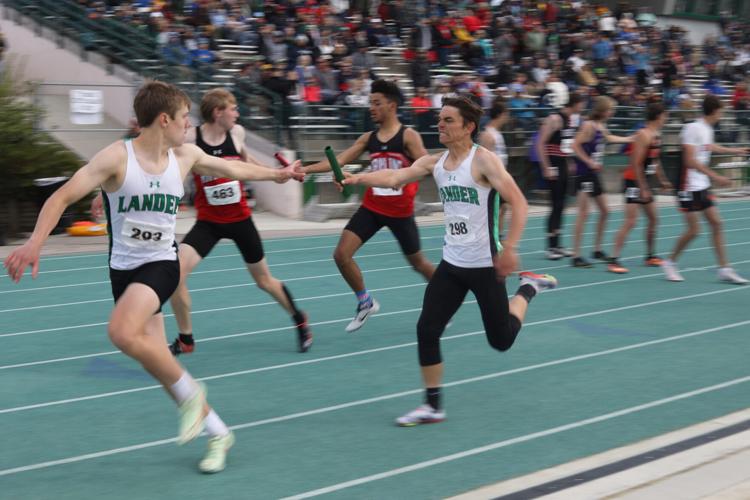 Lander's Aidan Russell hands off to Gage Gose for the final leg of the Class 3A boys 4x400-meter relay at the Wyoming State High School Track & Field Championships on Saturday in Casper. 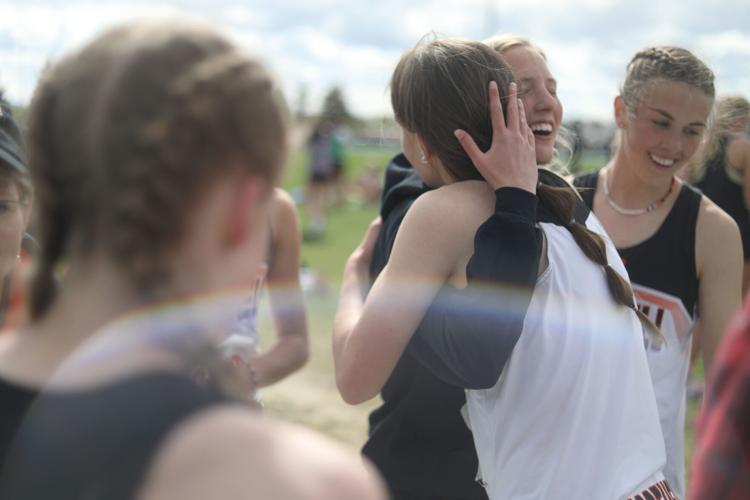 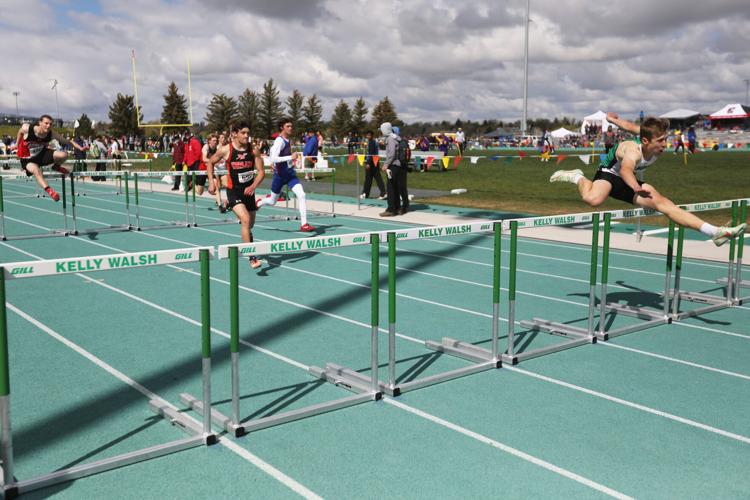 The Tigers entered Saturday’s race with just a 2.5-point lead over Mountain View (88-85.5), and the team of Matisse Weaver, Reed McFadden, Aidan Russell and Gage Gose kept the lead throughout the race to give Lander back-to-back titles. The Tigers finished in 3 minutes, 28.55 seconds while Mountain View was sixth in 3:35.07 to give Lander the 98-88.5 victory. Last year the Tigers and Buffalos entered the 4x400 tied, but Lander finished third and Mountain View eighth to win the title.

“The coaches sat down Friday night and were looking at the points and we thought we had a chance,” Lander head coach Ben Gose said Wednesday in a phone interview. “But it’s still kind of a surprise.”

It’s a championship not many people saw coming a month ago when McFadden and senior Shawn Cozzens were both sidelined. McFadden missed three weeks after missing the high jump pit during an attempt and fracturing both his skull and his shoulder. Cozzens competed at the West Regional meet two weeks ago after missing more than a month with a hamstring injury.

This past weekend, the two played key roles in the Tigers’ title. Cozzens finished fifth in the 100- and 200-meter dashes and ran a leg on the winning 1600 sprint medley team and the runner-up 4x100 team.

“Shawn did just what he needed him to do in the sprints Saturday,” Ben Gose said.

McFadden, who was cleared to run but was unable to compete in the high jumps or the hurdles, not only ran the second leg on the 4x400 team and the opening leg on the second-place 4x800 team, but finished third in the 800

“That was a scary situation,” Gose said. “Reed is a competitor so he wanted to come back right away, but we had to wait to get the OK from the doctors.”

With only a handful of Tigers in the field events — senior Jonah Brown’s fifth-place finish in the pole vault gave Lander its only field event points of the weekend — they needed a strong performance on the track.

They got it Friday morning when senior Blaine Goklish won the 800. Combined with McFadden’s third-place finish that gave the Tigers 16 points in the event.

“That was a big turning point for us,” Gose admitted.

Lander got another 16 combined points in the 4x100 and 4x800 later in the day to set the stage for Saturday.

Junior Gage Gose cruised to victory in both the 110- and 300-meter hurdles, including a Best of the Best performance in the 300 hurdles (38.69 seconds), in which Weaver finished third.

“Gage has been getting it done all year for us,” Ben Gose said of his son, “but state is a different kind of pressure.”

Gage Gose and the rest of the Tigers were up to the challenge. And when the team title came down to the 4x400 Lander was at its best, with the team of Weaver, McFadden, Russell and Gose setting a personal record as well as running the sixth-fastest time in program history.

“We came into the relay knowing that we were only 2.5 points ahead of Mountain View and we just knew that we needed to get it done,” said Weaver, who ran the opening leg and handed the baton to McFadden.

“I just wanted to get us out in front to put our back two runners in a position to stay in front,” McFadden added. “We talked about all the preparation we put into this race all season to be in this position.”

“It was an all-or-nothing type of race,” said Russell, who took the handoff from McFadden. “At first I was feeling the pressure but then when we got on the starting line we were ready to close this thing out. Seeing Gage come around the second turn in first was a good feeling because we knew we had it.”

The Tigers held a slim lead over Rawlins when Gage Gose got the baton for the final leg. He quickly increased the lead and was all alone coming down the backstretch. His teammates were waiting to celebrate shortly after he crossed the finish line.

“This is crazy,” Gage Gose said. “We’re a team that really persevered and we really wanted to defend our title. I think the team aspect of track really means a lot to this team.”

The Powell girls came into the 4x400 relay knowing they needed to finish at least fourth to win their second consecutive team title. The Panthers entered the final race with 86 points, four points back of Mountain View. But with the Buffalos not fielding a 4x400 team, Powell knew the five points earned for a fourth-place finish would make it back-to-back champs.

The Panthers did even better, with the team of sophomore Waycee Harvey, juniors Megan Jacobsen and Anna Bartholomew and senior Jenna Hillman winning the event to finish with 96 points.

It was a fitting send-off for Hillman, who ran the anchor leg. The senior won gold in the 100 and 200 and silver in the 400 to end her Panthers career.

Even though those were the only individual wins for Powell, there were plenty of Panthers on the podium throughout the weekend.

Tanner, who won the Class 4A discus title and finished second in the shot put at the state outdoor meet in May, is the first boys winner of the award from Sheridan.

Lander's Aidan Russell hands off to Gage Gose for the final leg of the Class 3A boys 4x400-meter relay at the Wyoming State High School Track & Field Championships on Saturday in Casper.