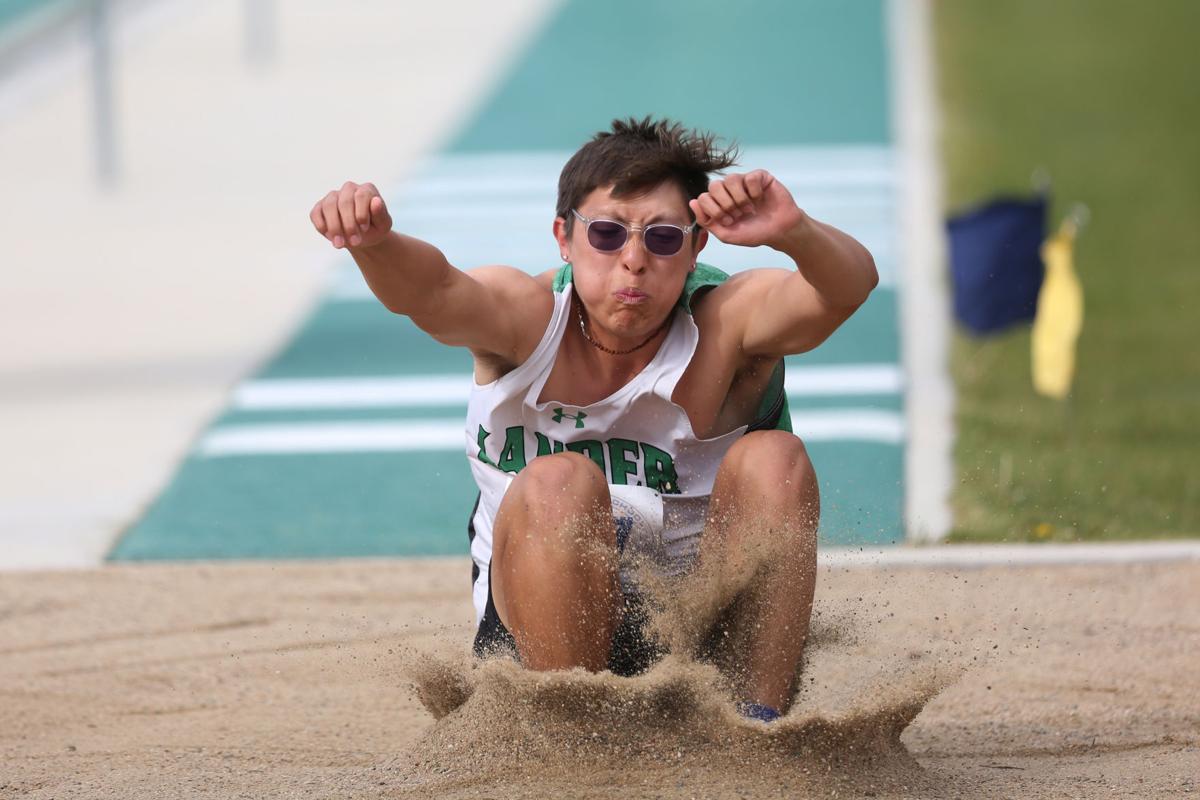 Lander's Beaver St. Clair lands in the long jump pit during the 2021 Wyoming State High School Class 3A Track & Field Championships on May 20 at Harry Geldien Stadium in Casper. 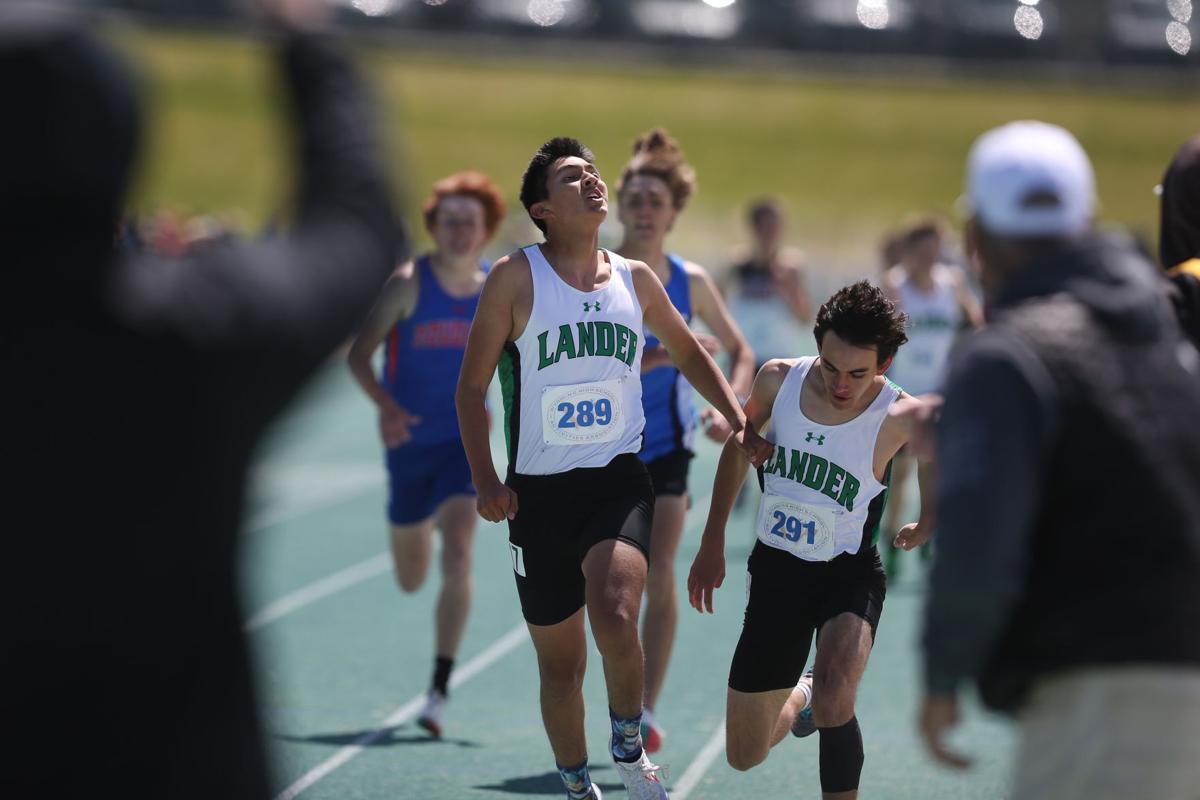 Lander teammates Blaine Goklish, left, and Sam Kistemann cross the finish line as they finish first and second in the Class 3A 1600-meter run Saturday at the 2021 Wyoming State High School Track & Field Championships at Harry Geldien Stadium in Casper.

Lander’s first state track & field championship since 2005 wasn’t decided until the final event of last weekend’s Class 3A boys meet on Saturday when the Tigers finished third in the 4x400 relay. Mountain View, which had been tied with Lander in the team standings heading into the race, finished eighth.

While the five-point difference gave Lander the 113-108 victory, it was what the Tigers did on the first day of the meet that set the tone for the weekend.

“We had a great first day,” Lander head coach Ben Gose said, “but that’s because it was distance heavy and that’s the strength of our team. But it was Beaver who really kicked it off for us in the long jump. That’s when we started to get excited about our chances.”

St. Clair set a personal record with a jump of 21 feet, 6.25 inches, finishing just 1 inch back of Pinedale’s Teagan Bowers. More importantly for the Tigers, St. Clair finished ahead of Mountain View’s Luke Branson, who placed fourth. Branson had won the West Regional meet the week before and entered the state meet with the best mark.

“We needed to kick it off with the long jump and Beaver went out and got that done,” Gose stated. “It didn’t surprise me, though, because that kid’s just a gamer.”

The eight points St. Clair earned in the long jump were the only field-event points the Tigers got all weekend. Gose knew coming into the season his team was loaded with distance runners who had led the Tigers to the state cross country title in October. With only so many spots available in the distance races the coaching staff had to find a way to integrate some of those runners into the team, and the relay races proved to be instrumental.

“It took us a little while to get things figured out,” Gose said. “About midway through the season we had guys like Reed (McFadden) and Peja that we didn’t really have a spot for, so the relays were key for us.”

“They practiced handoffs for about 20 minutes before they had to run and then they go out and run a pre-qualifying time,” Gose laughed. “And Shawn was the only sprinter on that team.”

The 4x100 team finished second at state. Those points, combined with those from the winning 4x800 team of Simonson, Kraft, Kistemann and Goklish; the runner-up finish from the 1600 sprint medley and the third-place finish from the closing 4x400 team gave the Tigers 32 points in the relays.

After Mountain View had surged back in front Saturday the Tigers once again took advantage of their strength to close the gap. Goklish won the 1600, with Kistemann grabbing silver and Simonson placing fifth.

“We knew we were going to get a lot of points in the 1600,” Gose said. “Kaleb kind of got out there and served as a rabbit for Blaine and Sam. That was a turning point for us.”

With Gage Gose finishing third in both hurdles and Cozzens taking third and fourth in the sprints on Saturday, the stage was set for the 4x400.

“We felt good about our team,” Coach Gose recalled, “but at that point we were just waiting it out. It was fun being in the hunt but we didn’t know what Mountain View was going to do.”

By the time Kraft got the baton for the final leg, the Tigers were well in front of the Buffalos.

“I just knew I couldn’t let Mountain View catch us,” Kraft said after the race.

The Buffalos didn’t. And Kraft and his teammates celebrated the program’s first state title in 16 years.

“We had seven guys score at least 10 points for us so it was definitely a team effort,” Gose said. “We just had a great group of athletic seniors and a bunch of guys with a lot of character.”

WINNING IN STYLE: The Tigers were tied with Mountain View heading into the final event of last week's state meet, but finished ahead of the Buffalos to win the program's first state championship since 2005.

HE SAID IT: “We had seven guys score at least 10 points for us so it was definitely a team effort.” -- Lander head coach Ben Gose.

Lovell’s Zeke Newman was getting ready to compete in the 800-meter run Friday when he paused to watch the Class 2A girls’ 800. What he saw bro…

Lander's Beaver St. Clair lands in the long jump pit during the 2021 Wyoming State High School Class 3A Track & Field Championships on May 20 at Harry Geldien Stadium in Casper.

Lander teammates Blaine Goklish, left, and Sam Kistemann cross the finish line as they finish first and second in the Class 3A 1600-meter run Saturday at the 2021 Wyoming State High School Track & Field Championships at Harry Geldien Stadium in Casper.