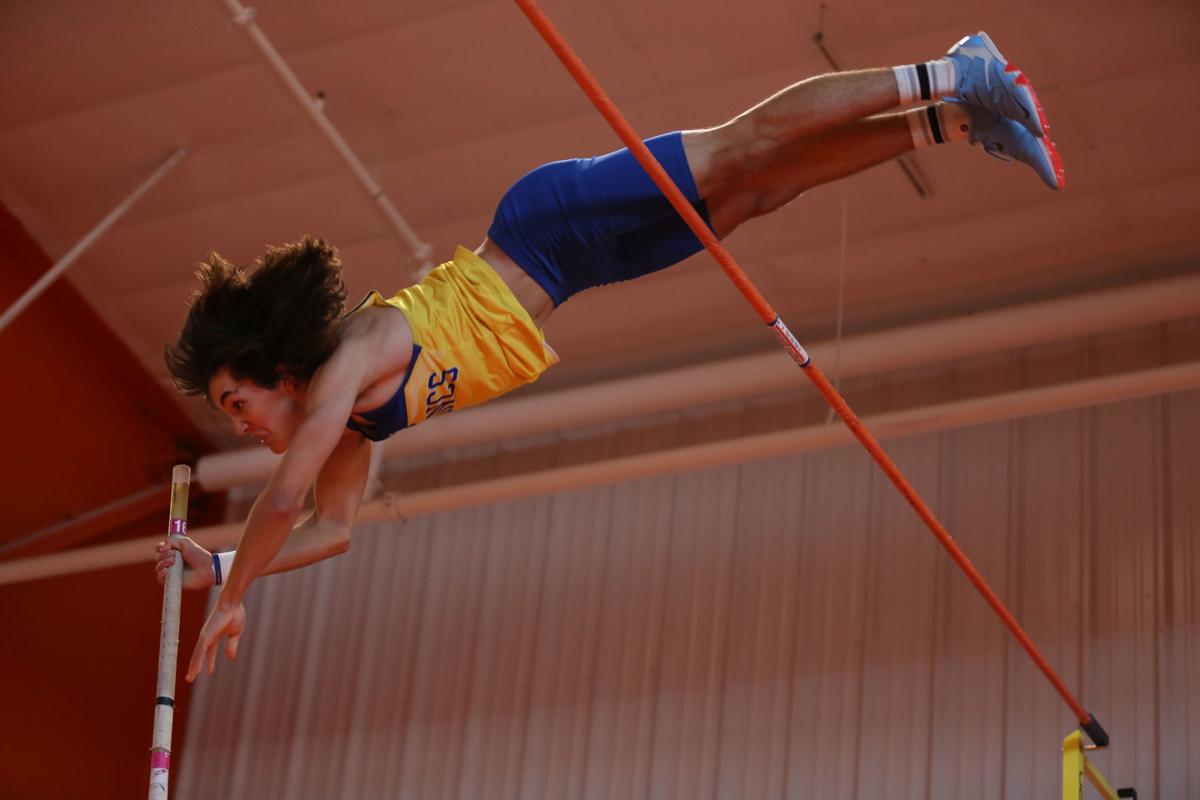 Ryan Karajanis of Sheridan attempts to clear 14 feet, 8 inches in the pole vault Saturday at the Mustang/Filly Indoor Invitational in Casper. 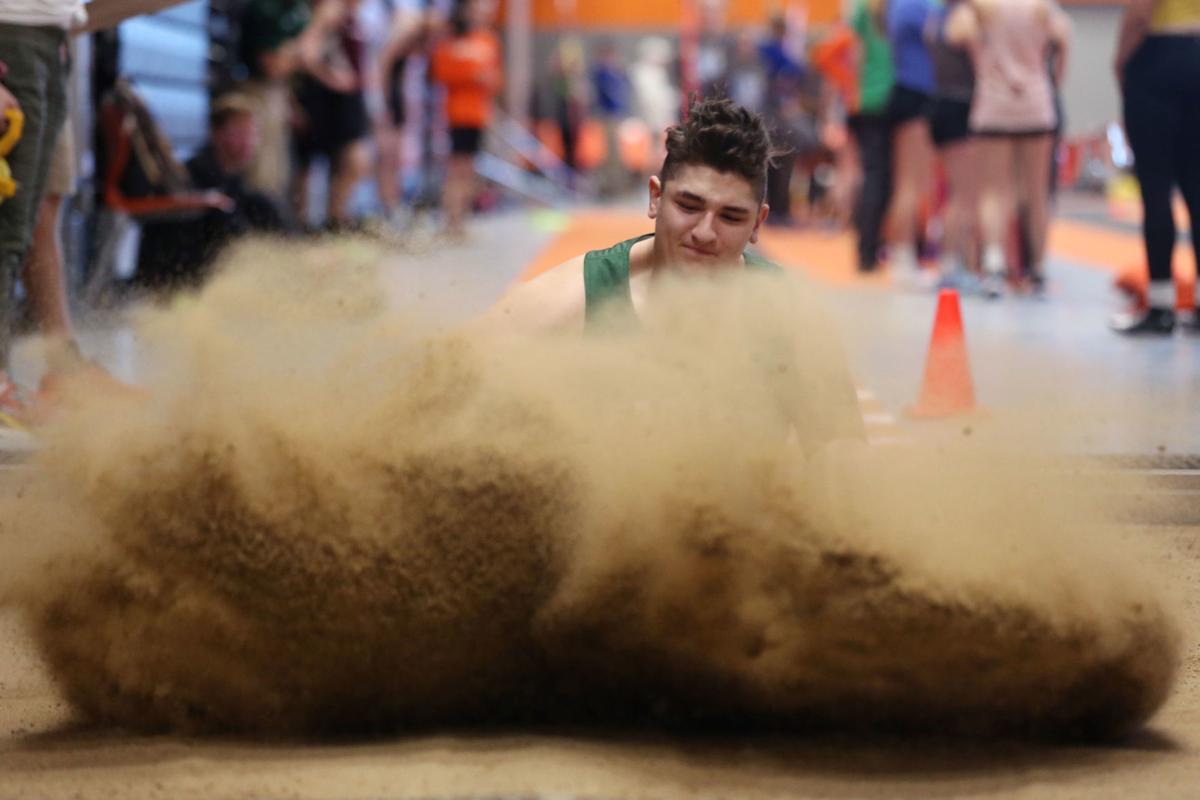 Jacob Knobloch of Tongue River lands in the long jump pit Saturday at the Mustang/Filly Indoor Invitational in Casper.

The lively crowd packed inside the Mustangs Activities Complex on Saturday afternoon collectively slow-clapped before each of Ryan Karajanis’s attempts to clear 14 feet, 8 inches. By that point he was the only pole vaulter remaining — no one else cleared 14-2 like he did. Here he was: an event winner with more in his sights.

He wanted it. Last week, at the Thunder Basin Triangular, the Sheridan sophomore cleared 14-foot and found himself once again shy of 14-8.

Karajanis felt the crowd’s roar as he went into his second attempt. He heard their cadence intensify with his own pace.

“That definitely gives me some adrenaline and pumps me up,” he said. “It gives me a lot of confidence.”

His textbook form continued into the vault itself. The sophomore made it over before his heel clipped the bar, forcing it off its perch and onto the mat. The crowd groaned in unison. They wanted it almost as much as he did.

Karajanis’s next attempt wasn’t as close. His shoulder hit the bar because, as he put it, he’d completely let the fundamentals slide and focused too much on willing himself over the bar. He still won the event, just like he has at each meet so far, but he’s yet to hit that mark.

He’s come into his own this season after finishing fifth on attempts with a 13-foot clearance at the 2019 state indoor meet. He regained his form to win gold with a 14-foot clearance in outdoor. That’s helped him regain confidence going into this indoor season and his recent results have him trending upwards going into the annual Simplot Games next week.

“I competed all right today and I’ve got a week until Simplot,” he said. “I’m going to get on a bigger pole and see what happens.”

The Sheridan standout wasn’t the only one competing at the Mustang-Filly Indoor Invitational with eyes on Pocatello, Idaho, next week. Rawlins junior Sydney Thorvaldson won the early 1,600-meter run by finishing in 4 minutes, 52.53 seconds. Before factoring in new results from across the nation this weekend, that would be the fifth-best indoor 1,600 time for a high school girl in the country. In the boys 1,600 it was Cheyenne Central’s Trevor Stephen holding off Natrona County’s Mason Henry for the win. They both finished in 4:40.0, but Stephen won by 0.65 seconds.

Kelly Walsh senior Taylor Rowe won the 55 dash with a 7.39-second sprint. Once she hit her stride, running neck-and-neck alongside Rock Springs senior Favour Wanjoku, she felt comfortable and confident with her time. Wanjoku finished in second with a 7.49.

The Trojans’ top sprinter started the season with a disappointing third-place finish inside the MAC. She’s since returned to win that and the 200 at last week’s Natrona County-Kelly Walsh dual. That possibly laid the groundwork for her sprint on Saturday. The 7.39 time she posted tied her personal record set at the Gillette Invitational two weeks ago.

“I feel pretty good,” she smiled. “Excited to be here, excited to run and come out here with my team.”

Her Kelly Walsh teammate, senior Emory Yoosook, won the boys 55 by seven-hundredths of a second against Big Horn senior Will Pelissier (6.68-6.75). Cody standout Grace Shaffer beat Kelly Walsh’s Taylor Siplon in the girls 55 hurdles by two-hundredths of a second (9.16 to 9.18). Natrona County’s Robert Douglas won the boys’ 55 hurdles by posting a 8.32.

In other early field events Cheyenne Central’s Aden Gallon won the triple jump with a leap of 41 feet, 2.25 inches. Wanjoku, Rock Springs’ famed leaper, won the triple jump by hitting 35-01. That came shy of her season best and gave her motivation a week from Simplot. Cheyenne East’s Addy Turner won the high jump on attempts by clearing 5-01 in fewer tries than did Riverton’s Asha Reid.

FORWARD: Competitors at the Mustang-Filly Invitational on Saturday hoped to gain confidence and form going into next week's Simplot Games.

HE SAID IT: "I competed all right today and I've got a week until Simplot. I'm going to get on a bigger pole and see what happens." -- Karajanis.

The annual Simplot Games begin Thursday on the campus of Idaho State University in Pocatello, Idaho, and Wyoming will be well-represented (if …

Ryan Karajanis of Sheridan attempts to clear 14 feet, 8 inches in the pole vault Saturday at the Mustang/Filly Indoor Invitational in Casper.

Jacob Knobloch of Tongue River lands in the long jump pit Saturday at the Mustang/Filly Indoor Invitational in Casper.