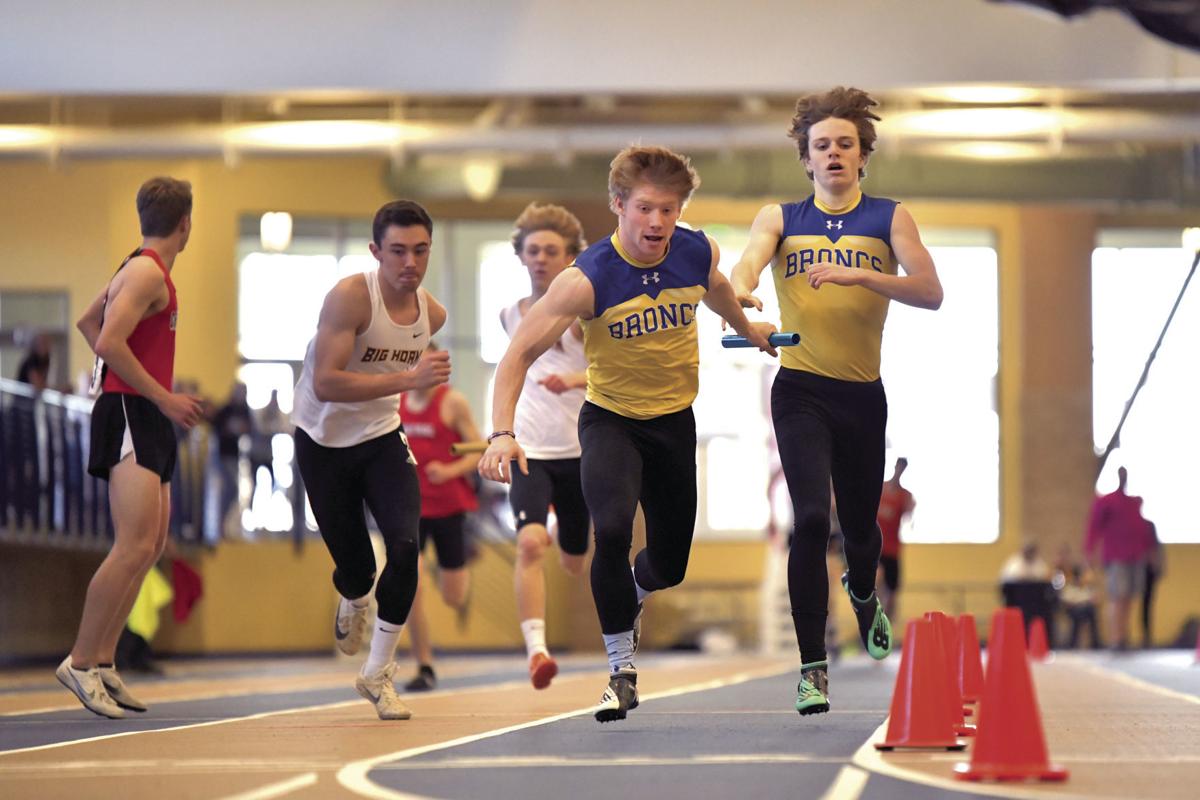 Sheridan’s Nathan Fitzpatrick, right, hands the baton off to Brock Bomar for the final leg of the 4x400 meter relay during the 2020 Indoor Track and Field Championships on March 7 in Gillette. 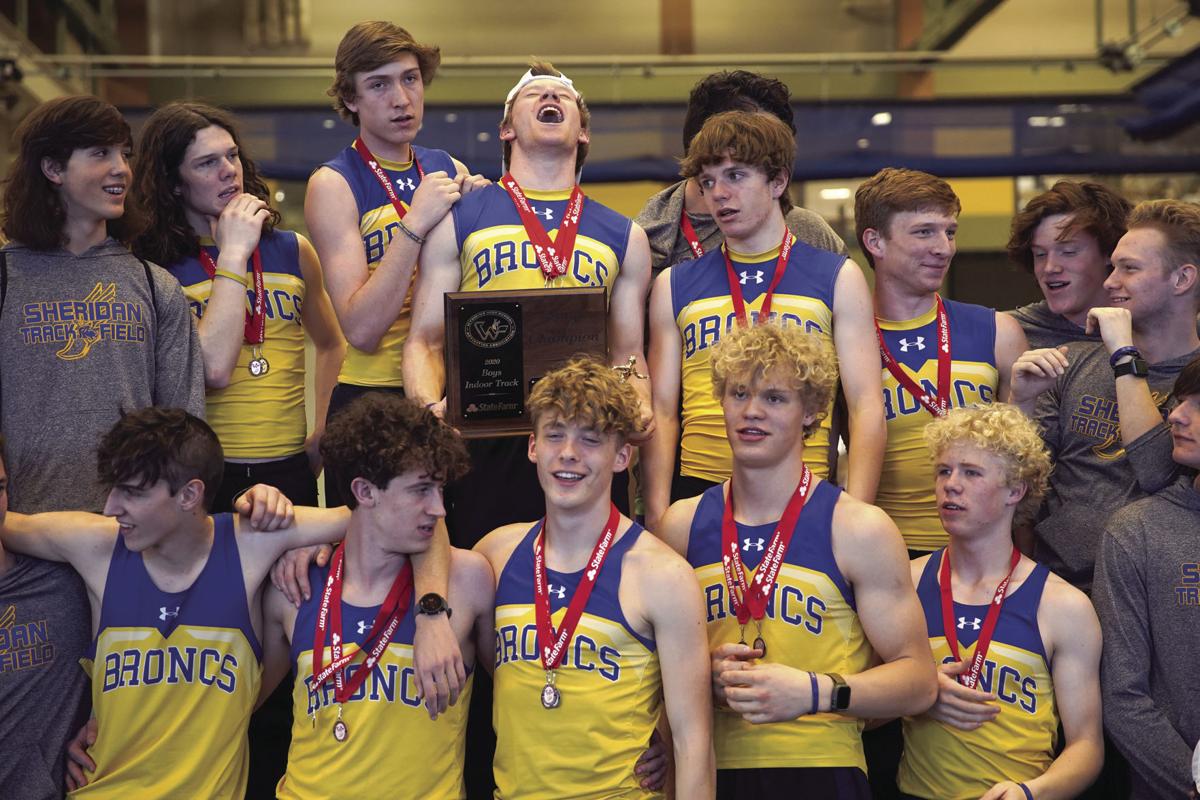 Sheridan’s Brock Bomar, back row center, starts a cheer as the Broncs boys indoor track team celebrates winning the state championship on the podium on March 7 in Gillette.

Brock Bomar already had missed enough of his high school athletics career before the coronavirus first appeared in the United States. He’d seen valuable practices and seemingly endless months of his high school years fall away while he mended. At least this time he’s healthy.

Bomar has found ways to keep himself busy throughout quarantine. He’s kept himself in shape and is doing everything in his power to stay busy during a time when he would have otherwise been focusing on sprinting toward at least a handful of state championships.

The Sheridan senior was weeks removed from cleaning house at the 2020 Wyoming State Indoor Track Championships when the Wyoming High School Activities Association, at the behest of the Natrona County Health Department, made the decision to cancel the Class 3A/4A state basketball tournament. Hopes of salvaging a final spring sports season ended shortly after. Bomar had been in contact with college coaches to pursue a track scholarship, but those have essentially been abandoned. This season has reminded him to treasure the good moments — something he learned the hard way just a few years ago.

Playing in the freshman classification-only state basketball tournament championship, Bomar suffered a broken leg that required multiple knee surgeries. That game happened in February 2017 and he wasn’t medically cleared to return until March 2018. Thirteen months on the sidelines made him treasure his eventual return.

Some of those times weren’t surrounded by disappointment. Some started as early as when he was 8 years old and ran at the national Hershey Track & Field Games. There he competed against some of the fastest kids in the country. By then he knew he was pretty good, even before he went undefeated running in middle school.

“That was kind of a sign of things to come,” he said. “But coming in as a freshman was really intimidating.”

Then came his injury, days before his freshman track season was scheduled to begin. He returned in time to run as a sophomore, putting together a respectable season that included multiple events at the state meet but no finals appearances. Based upon his previous successes, Bomar thought he could have accomplished more. Then again he was racing against 18-year-old Class 4A athletes with years of conditioning and weight-training workouts.

“You learn a lot about humility,” Bomar remembered.

He struck into that potential last year as a junior. Running alongside teammates Izak Aksamit, Matt Roma and Cody Stults, the Broncs earned silver in the 4x400-meter relay during the outdoor season. That full season with a state-championship caliber team helped his career take its next logical step.

“The three of us ran every day and pushed each other,” Bomar said. “I was finally healthy almost all of last year. I ran well at regionals and in outdoor, just not so much at state.”

His shift to the indoor track season as a senior furthered his reputation and put him on the national spotlight. Bomar won the 55-, 200- and 400-meter dashes, ane wv on the 4x400 relay as the anchor leg running with Aksamit, Carter McComb and Nolan Fitzpatrick. Collegiate coaches in South Dakota, Montana, Colorado and Arizona called asking about the Broncs’ future, offering him scholarships. None of them panned out.

“It kind of sucks because I think I would have gotten more offers in outdoor,” Bomar said. “That would have been good for at least some college coaches, but I’m not sure if that impacted a lot of them.”

Cancellation of the outdoor season resigned him to hypotheticals. He’d already been in contact with Montana State in Bozeman about studying there. He’s decided to study engineering, to follow in his father’s footsteps and pursue either civil or architectural engineering. Family legacy aside, he’s enjoyed his math and science classes so it’s seemed like the logical choice.

He’d already taken tours of the Montana State facilities and he communicated with coaches there before the spring season was canceled. He said he’s uncertain if he’ll sprint there. It would be tough to say goodbye to running now without closure — but at least there’s the good times.

HE SAID IT: "It sounds cliche, but it teaches you to work hard and appreciate the time you had. Now I don't even get a senior season." -- Bomar.

Sheridan’s Nathan Fitzpatrick, right, hands the baton off to Brock Bomar for the final leg of the 4x400 meter relay during the 2020 Indoor Track and Field Championships on March 7 in Gillette.

Sheridan’s Brock Bomar, back row center, starts a cheer as the Broncs boys indoor track team celebrates winning the state championship on the podium on March 7 in Gillette.