Sydney Thorvaldson from Rawlins curves around the track in the 1600-meter run at the Mustangs/Fillies Indoor Track Invite on Saturday in Casper. 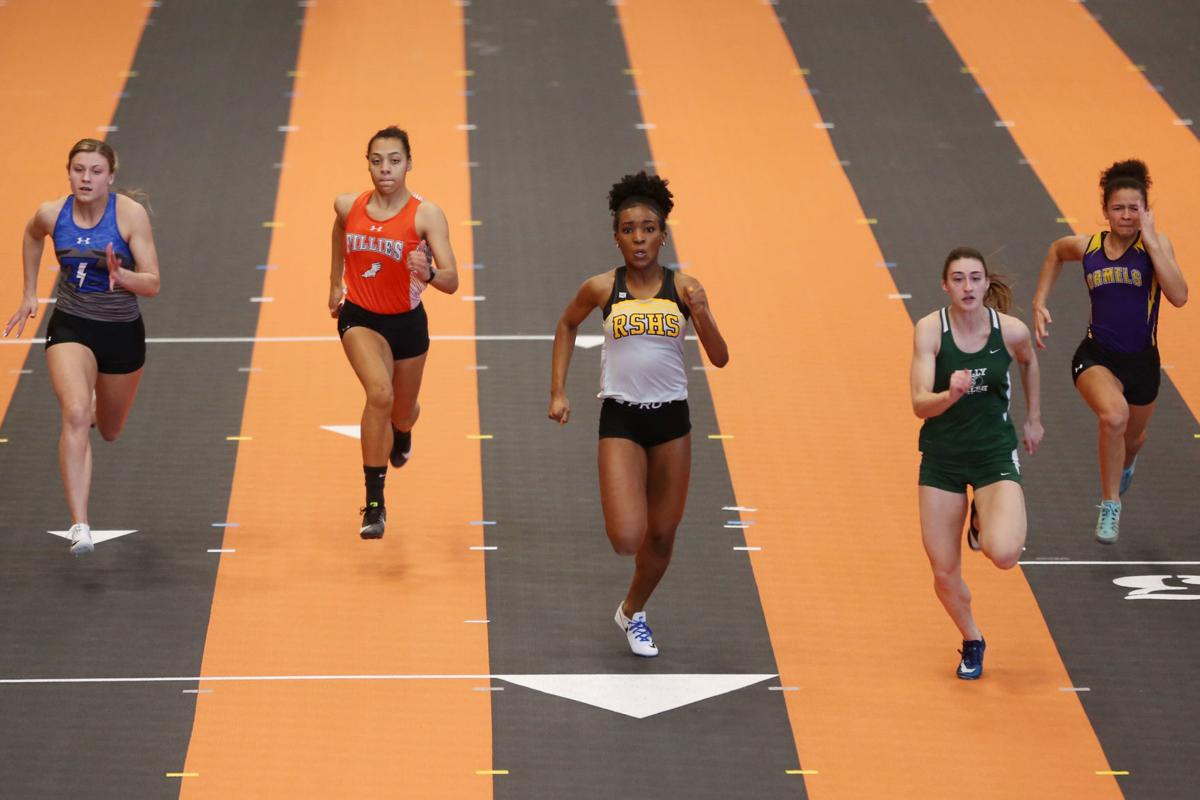 Favour Wanjoku of Rock Springs, middle, sprints down the track in the 55-meter dash at the Mustangs/Fillies Indoor Invite on Saturday in Casper.

The annual Simplot Games begin Thursday on the campus of Idaho State University in Pocatello, Idaho, and Wyoming will be well-represented (if they can make the drive).

A total of 480 entries from Wyoming have been submitted (229 boys, 251 girls) for “North America’s Premier High School Indoor Track Meet.” Most of them worked the last two weeks with this meet in mind, serving as the mid-way point of the season before the state meet later on.

Rawlins junior Sydney Thorvaldson leads the field a year after she etched her name into history. Last year Thorvaldson and her family found a way through Wyoming road closures in time for her to qualify in a Friday solo race after her fellow 3,200-meter entries ran. She went on to set a new 3,200-meter Simplot Games record with a 10-minute, 19.05-second time. She currently leads the country with the best 3,200 time (10:20.18 set at Natrona County last week). She’ll only run the 3,200 in Pocatello (Thursday qualifying; Saturday afternoon finals).

Junior Riley Smith of Cody is entered in the 1,600. She finished sixth in the event last year.

As far as other returners who dazzled at Simplot last year, Sheridan once again entered a 4x200 relay team after winning last year’s event. The Broncs also entered a team in the 4x400 relay where they got third last year. The members of those teams, however, were not revealed with entry and heat/flight announcements.

Then there are standouts like Thunder Basin’s Donovan Hoffman and the Sheridan duo of Beau Toyne and Carter McComb running in the last heat of the 200. Alex Garber (Sheridan) and Travis Harmon (Mountain View) round out the most high-profile middle-distance boys’ entries. Taylor Rowe (Kelly Walsh), Emma Brown (Cheyenne East) and Tia Nelson (Evanston) are all entered in middle-distance races for the girls. Wind River’s Mindy Russell is running the 400 unattached and representing her hometown of Kinnear.

A combined 20 boys relay teams from Wyoming are entered to match 19 girls’ teams.

The Wyoming boys’ field is highlighted by an eclectic bunch. Sophomore Quinn Lindsay, who attends Rocky Mountain but typically competes for nearby Lovell during the indoor season, stands out among weight throw participants. Sheridan sophomore Ryan Karanjanis, coming off a fiery effort at Natrona County last weekend, leads the pole vault group. Douglas’ Sutton Perry, Cody’s Isaac Taylor, Worland’s Cole Harman and Sheridan’s Connor Goss are among notables entered in the high jump. Cheyenne Central senior Aden Gallon comes off a win last weekend to bring momentum and a large group of Wyomingites into the long jump and triple jump. Mountain view junior Joseph Turner leads Wyoming’s throwers into the shot put with the best mark out of the field.

Competition starts at 4:30 p.m. on Thursday with the boys’ 3,200 prelims. The only final events on Thursday will be both boys and girls weight throws. Friday hosts all remaining qualifying and preliminary events. All remaining finals begin Saturday at 8:30 a.m. with competition running until the early evening.

Sheridan pole vaulter wins with a vault of 14 feet, 8 inches.

Sydney Thorvaldson from Rawlins curves around the track in the 1600-meter run at the Mustangs/Fillies Indoor Track Invite on Saturday in Casper.

Favour Wanjoku of Rock Springs, middle, sprints down the track in the 55-meter dash at the Mustangs/Fillies Indoor Invite on Saturday in Casper.