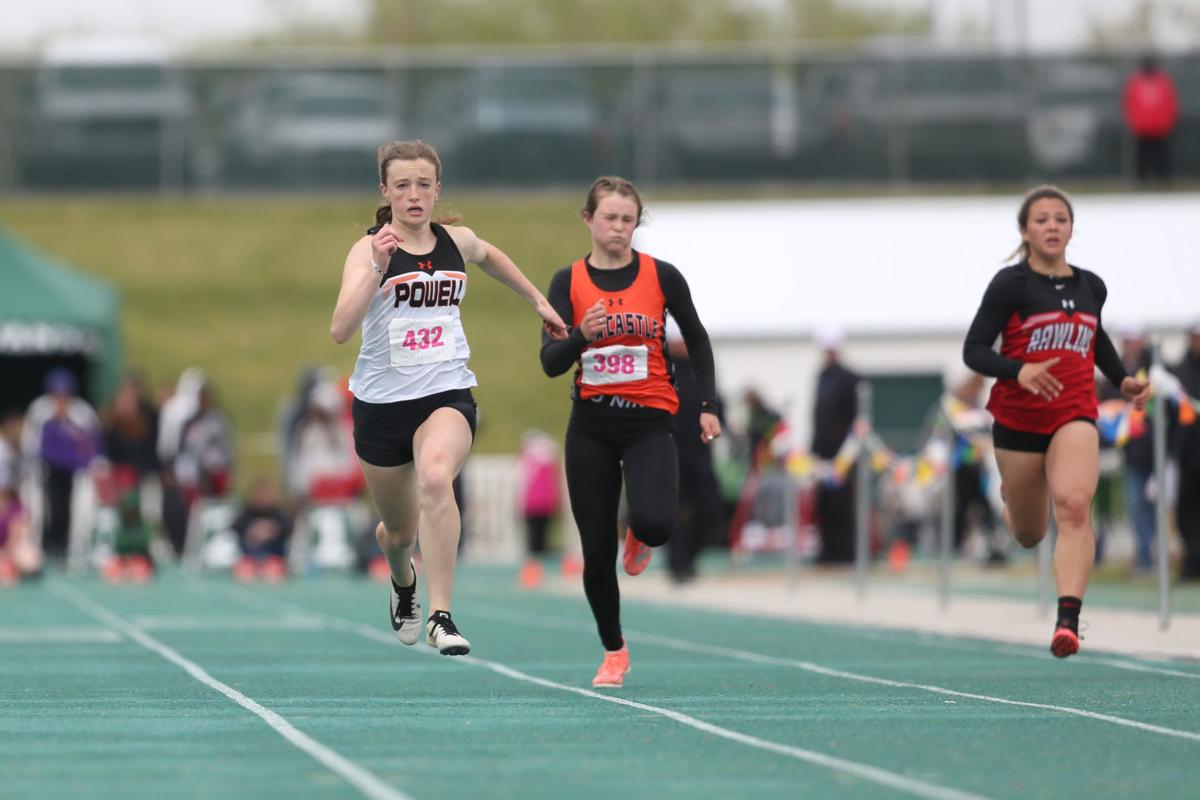 Powell's Waycee Harvey pulls ahead to win the Class 3A 100-meter dash May 22 at the 2021 Wyoming State High School Track & Field Championships at Harry Geldien Stadium in Casper. 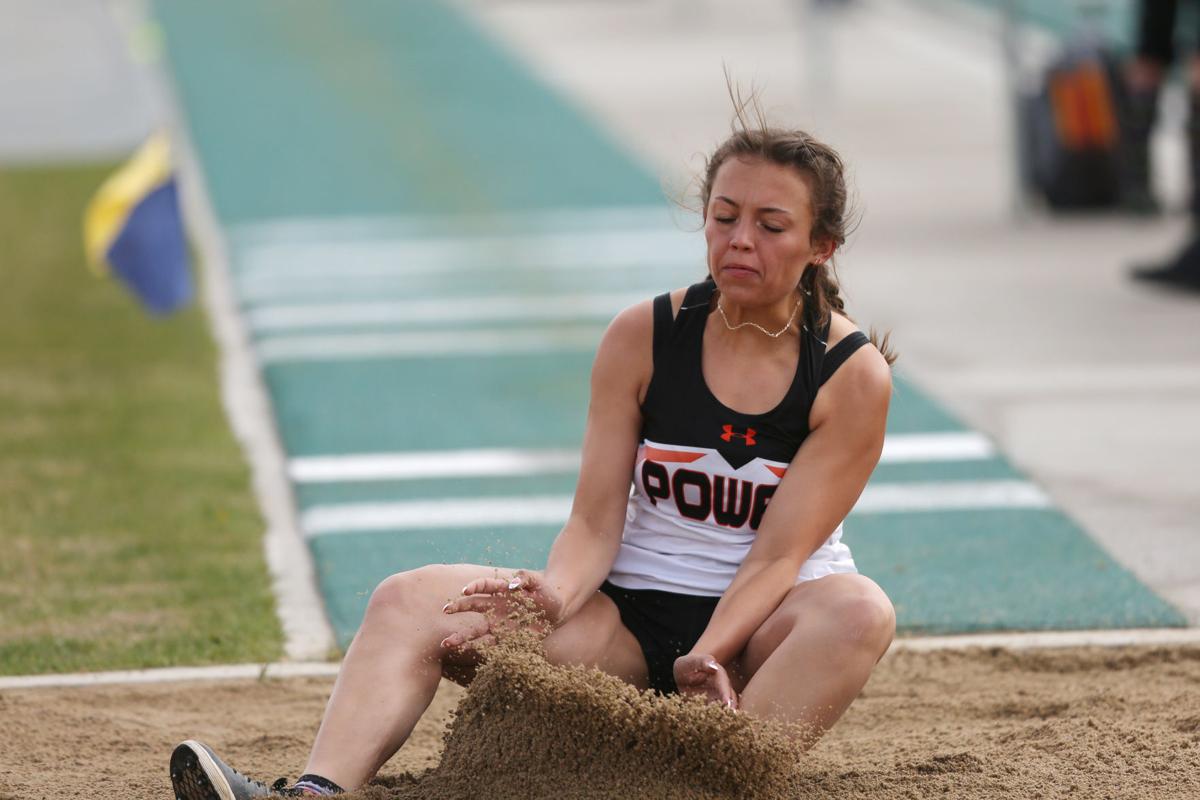 Elsie Spomer of Powell lands in the pit during the Class 3A triple jump at the 2021 Wyoming State High School Track & Field Championships at Harry Geldien Stadium in Casper.

For years, the Powell girls track and field team was a contender at the state meet. Since 2011 the Panthers had four runner-up finishes and finished third on two other occasions. Bringing home the championship trophy, however, had eluded the program since 1992.

That all changed last weekend as the Panthers scored points in all but three events to win the Class 3A title. In a meet in which eight teams scored at least 50 points, Powell finished with 105 points to outdistance runner-up Buffalo (71) and third-place Douglas (66).

“Buffalo and Douglas had some outstanding kids,” Powell head coach Scott Smith said, “but they had holes. And we were able to fill those holes with more kids placing than they were. We had a lot of kids bringing home medals.”

Led by gold-medal performances from sprinters Waycee Harvey in the 100 Jenna Hillman in the 200 and the 4x400 relay team of Harvey, Hillman, Anna Bartholomew and Megan Jacobsen; and second-place finishes from Hillman (400), Emma Karhu (pole vault), Reagan Thompson (shot put) and Cassidy Miner (discus) the Panthers had 14 athletes score points in individual events and another four on point-winning relay teams.

“We knew that we were going to be good,” Smith said. “It just took us a while to figure out what everybody else in the state really had. We thought we could score 100 points, but we didn’t know if that would be enough because this year there was a lot of parity.”

Powell trailed both Mountain View and Douglas after the first day, but scored 14 points in the pole vault and 13 in the discus on Friday to create some distance from the field. The Panthers put the finishing touches on their first state title in 29 years by scoring 52 points on the final day

Saturday seemingly got off to a tough start for the Panthers when Hillman false-started in the 100.

“It was the worst morning of my life,” the junior admitted later that day. “I was mad at myself because I had never false-started before. So I allowed myself one hour to cry and then I started focusing on the 200.”

“Those are those pleasant surprises that you like to see,” Smith said of Hillman’s win in the 200. “Jenna had never been on that edge, it just happened.

“You love to see that kind of resilience in an athlete because that’s the kind of thing that’s going to translate into life. She showed she could overcome adversity.”

The same could be said for Karhu. The senior, who placed third in diving at the state meet in November and fifth at the state wrestling meet in February, finished second in the pole vault and ran on the 4x100 relay team despite being injured.

“She was out for a couple weeks with a stress fracture in her foot,” Smith said of Karhu, who had knee surgery this week. “She was about 75 percent at best. A lot of kids would have been out, but she kept competing.”

Smith listed other athletes who stepped up during the meet and cited the assistant coaches who also contributed to the win.

“Since I’ve been here (in 1993) the nucleus of our track staff has been together for 17 years,” he stated. And about 13 years ago we were able to add a pole vault coach in Dan Hunter. That continuity in our staff has been a big factor in our success.”

Powell had already clinched the team title by the time the final event — the 4x400 relay — rolled around. True to form, though, the Panthers continued to compete like the state championship depended on how they finished.

“We knew the 4x400 team had a chance to win it,” Smith admitted, “so it was nice to see them come out and achieve that. Their time may not have been better than it was at regionals, but the performance was certainly better. It was a great way to end the track meet.”

STRENGTH IN NUMBERS: The Panthers had 14 athletes score points in individual events at the state meet and four more in the relays to lead the program to its first team title since 1992.

HE SAID IT: "We had a lot of kids bringing home medals." -- Powell head coach Scott Simpson.

Powell's Waycee Harvey pulls ahead to win the Class 3A 100-meter dash May 22 at the 2021 Wyoming State High School Track & Field Championships at Harry Geldien Stadium in Casper.

Elsie Spomer of Powell lands in the pit during the Class 3A triple jump at the 2021 Wyoming State High School Track & Field Championships at Harry Geldien Stadium in Casper.