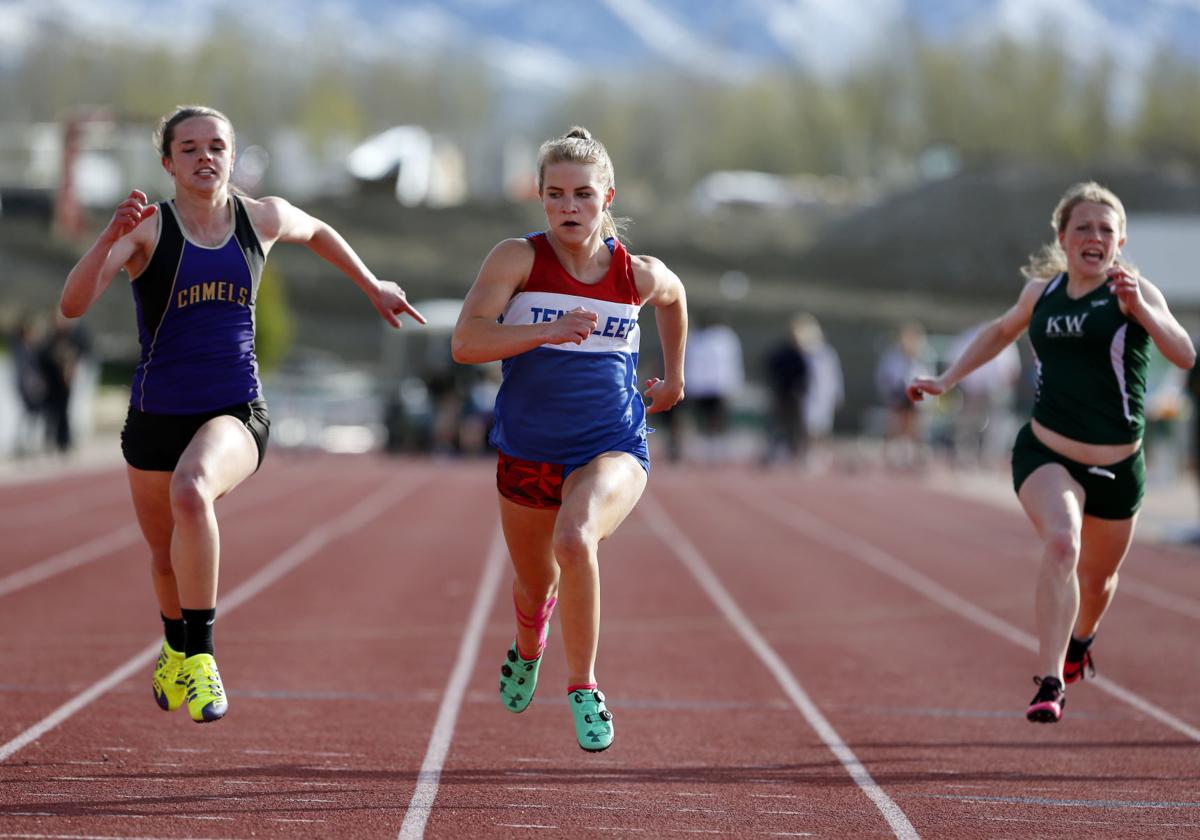 Sydney Holiday, competing for Ten Sleep, edges out Gillette's Kelly Moodry, left, and Kelly Walsh's Grace Czellecz to win the 100-meter dash at the Wyoming Track and Field Classic on May 2, 2017 in Casper. 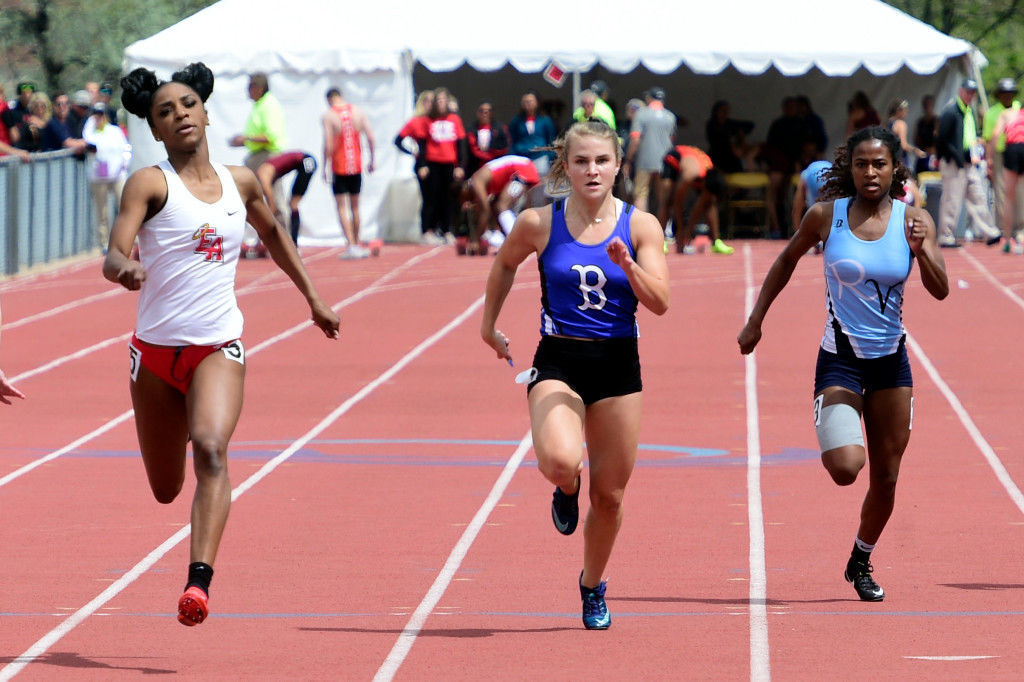 Sydney Holiday, center, of Broomfield, competes in the 100-meter dash finals during the Colorado Track and Field State Championships on May 18, 2019, at Jeffco Stadium in Lakewood, Colo. 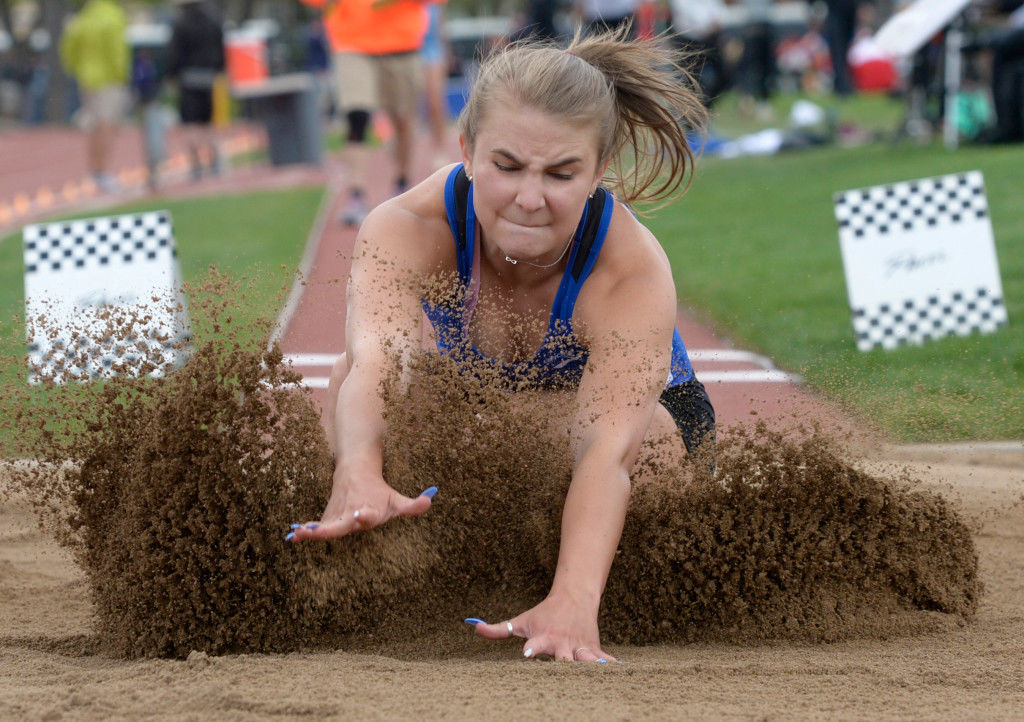 Broomfield's Sydney Holiday competes in the long jump during the Colorado Track and Field State Championships on May 17, 2019 at Jeffco Stadium in Lakewood, Colo. 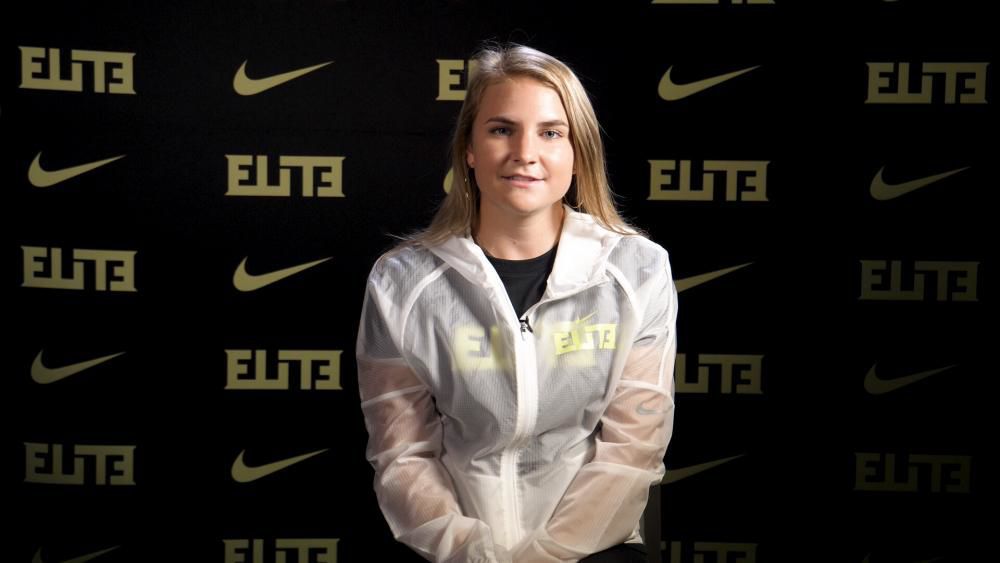 Sydney Holiday poses for a portrait during the Nike Elite Camp on July 13, 2019.

The novel coronavirus pandemic has taken multiple opportunities away from Sydney Holiday. She arrived in New York City for New Balance Indoor Nationals just two hours before the meet was canceled. She’d planned her whole season around peaking at the prestigious event with eyes on winning the meet by running a low 7.2-second 60-meter dash.

During her ensuing 15-day self-quarantine she watched her senior season and all her plans fall like dominoes. Months of strategic approach to her final high-school season disappeared into the air. The Brooks PR, Arcadia Invitational, New Balance Outdoor Nationals, her recruiting process and 2020 Olympic Trials all gone. She needed to regroup.

Three years before her senior year on the prestigious Broomfield, Colorado, track team fell victim to the pandemic, Holiday burst onto the scene as a Ten Sleep Pioneer. She ran the indoor season for Cody, winning two individual state championships while teaming with cousin Kelli. The two ran for Ten Sleep the following spring, where Sydney crushed Class 1A competition in the 100 and 200 dashes, and 100 hurdles. She successfully defended all three of those championships as a sophomore and added a new Class 1A long jump record (18 feet, 1.5 inches). Now she’s one of the nation’s most sought-after high-school sprinters in one of the most uncertain times of being a high school senior.

“Everything I was working towards was gone,” Holiday told the Star-Tribune recently. “But I knew everything happened for a reason and I knew through hard times that I had to focus on myself. It wasn’t just taken away from me, it was taken away from everyone.”

She’s gone back to basics in quarantine. Her family ordered home gym equipment to at least help her maintain her strength. A squat rack was the first to arrive, even before its accompanying weights. There’s also an in-transit set of dumbbells. All in hopes of conforming to her new timeline.

Holiday joined FK Elite, a club track team in Broomfield, to elevate her abilities. She made an immediate impact on club head coach Chuck Dugue, who remembered Holiday beating the best sprinters in the club right away. Dugue’s training cycle starts the first week of August and runs to the first week of December. He typically likes to coach athletes in a 2-year cycle.

“I’ve had a couple top sprinters in my program, but she was really the first one I had who didn’t have outside influence,” Dugue explained. “Most of the time you get outside forces and her focus was on being a great sprinter. No matter what she still wanted to be a great athlete and that made things easier.”

Holiday’s first race associated with FK Elite was the 2019 Simplot Games. There she won the 200 and finished third in the 60. Coincidentally, her final high school-level track meet was the 2020 Simplot Games. She ran the 60 in a winning 7.5 seconds. In between she’s competed in the Aracadia Elite 100, Great Southwest Elite 100, the Brooks PR, the Prefontaine Classic and even making the Under-20 United States Track and Field Championships as a junior. She also made the Nike Elite Sprint Team, an exclusive club limited to just eight of the best sprinters from America, Canada and Jamaica.

Her next goal was to run an 11.15 in the 100 at the United States Outdoor Track and Field Championships and earning a spot at the Olympic Trials. She’d also navigate the recruiting process during that time. She’d hoped to trim her list to five schools after nationals. But now all those events have been canceled and her recruiting trips have been shut down.

It’s been tough for Kent Holiday to watch his daughter’s livelihood thrown into the unknown of the pandemic.

“It’s been a rough couple weeks for her navigating all the changes she has had to face right at a time where six years of training and an unbelievable junior year was about to take her on a phenomenal ride for her senior season of high school track,” he said. “But she is a competitor and she will come out the other side of this a lot faster and stronger both physically and mentally.”

As Sydney re-prioritized, the U.S. Olympic Trials have taken the top spot. She’s essentially going to take a gap year, completing her second year of Dugue’s FK Elite training cycle in hopes of making the Olympic Trials for the delayed 2021 Olympics. She said she plans on taking recruiting trips along the way, all a byproduct of her improvement on the track.

Holiday never had a coach sit with her and take her through the approach before she sat with Dugue. He explained that not all hamstrings are of equal strength. Sometimes he’s instructed sprinters to start with both knees down to take pressure off the hands.

“After that I was so much stronger,” she explained. “I used that to help me through.”

No matter the stage — whether she’s running against some of the nation’s best athletes or aligned in the blocks for the Colorado state championship meet — everything after the starting gun goes off is a blur. Her sister, Kenna, has asked if Sydney’s been able to hear the cheers. Not typically. Holiday’s remained focused on her drive in the blocks, visualizing and then mimicking her starts in practice. By the time she’s snapped out of the trance her eyes dart toward confirmation on her time.

Her legacy started in cozy Ten Sleep, home to only 260 people, significantly more livestock and a brewery that’s given tourists a reason to stop. It was there in Ten Sleep where Holiday found her love for running. She’s fondly remembered those family days. And perhaps if she hadn’t been alongside family in the beginning, maybe she wouldn’t have risen to her current stature.

“If my older sisters and cousins didn’t run then I don’t know if I ever would have,” Holiday said, listing out her short-lived soccer career and endeavors into other sports. “To be able to be coached by my uncle and Coach (Desiree) Egger and everyone there made a huge impact on me because without them I wouldn’t have done track. I just loved running with my cousins and was fortunate to compete with them for a couple seasons.”

Heightened competition has elevated Holiday’s abilities. She ran a 12.2-second 100 in seventh grade and didn’t feel she truly improved on that time until she made the move to Colorado. Even by the time she’d made that move to become one of the most-recruited sprinters in the country, she’d etched her name into the Wyoming history books. Ten Sleep’s impressive native daughter.

TEN SLEEP RAISED: Before Sydney Holiday was regarded as one of the country's best sprinters she was a state champion runner at Ten Sleep.

DELAYED: Due to the coronavirus pandemic, Holiday's schedule has been thrown askew. So she'll take a gap year to focus on making the U.S. Olympic Trials before sprinting in college.

SHE SAID IT: "Everything I was working towards was gone. But I knew everything happened for a reason and I knew through hard times that I had to focus on myself. It wasn't just taken away from me, it was taken away from everyone." -- Holiday.

Sydney Holiday, competing for Ten Sleep, edges out Gillette's Kelly Moodry, left, and Kelly Walsh's Grace Czellecz to win the 100-meter dash at the Wyoming Track and Field Classic on May 2, 2017 in Casper.

Sydney Holiday, center, of Broomfield, competes in the 100-meter dash finals during the Colorado Track and Field State Championships on May 18, 2019, at Jeffco Stadium in Lakewood, Colo.

Broomfield's Sydney Holiday competes in the long jump during the Colorado Track and Field State Championships on May 17, 2019 at Jeffco Stadium in Lakewood, Colo.

Sydney Holiday poses for a portrait during the Nike Elite Camp on July 13, 2019.