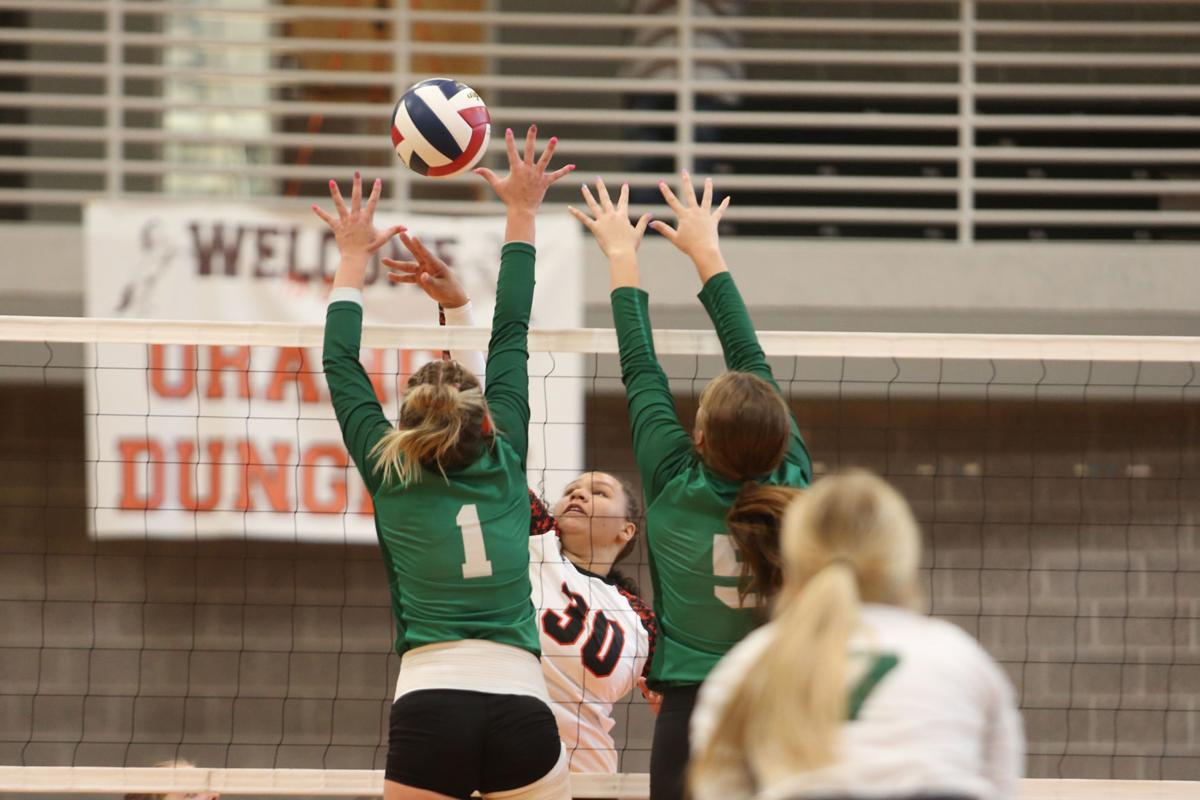 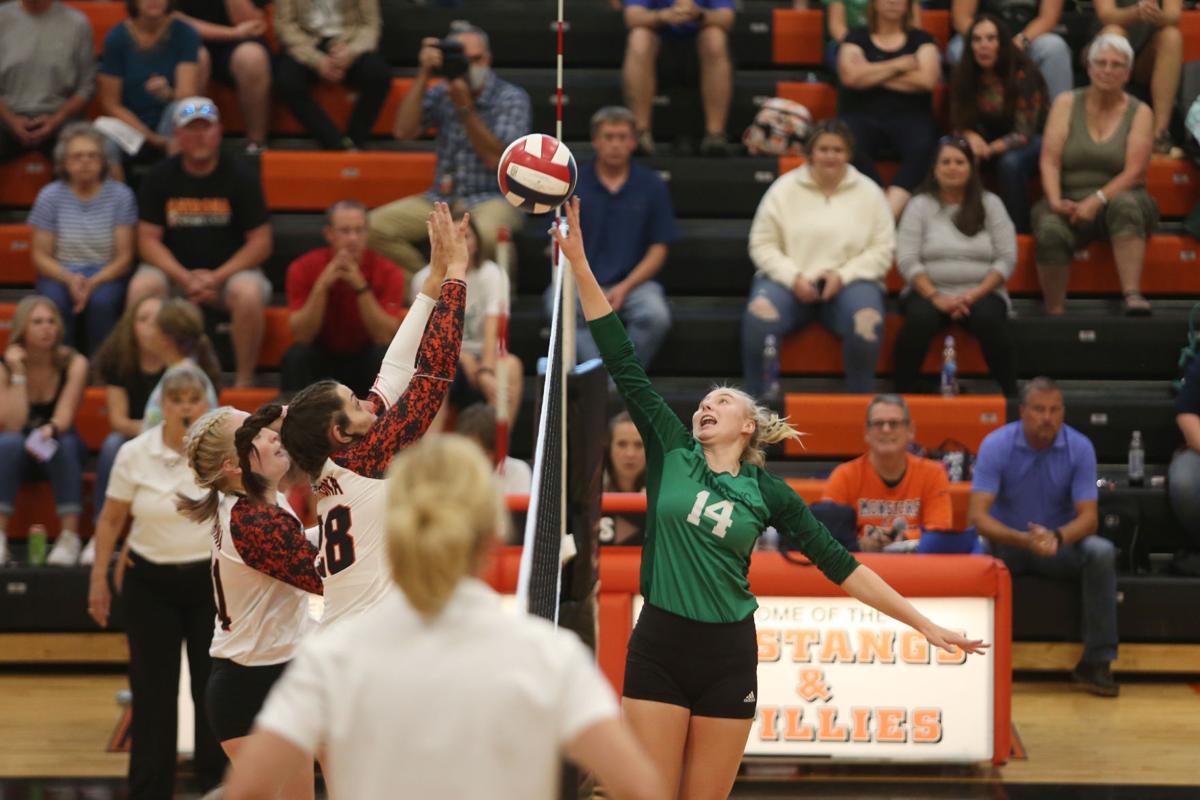 Kelly Walsh's Cydney Eskew tips the ball over the net as Natrona County's Brynn Sybrant tries to block during their match Thursday at NC's Jerry Dalton Gym in Casper. 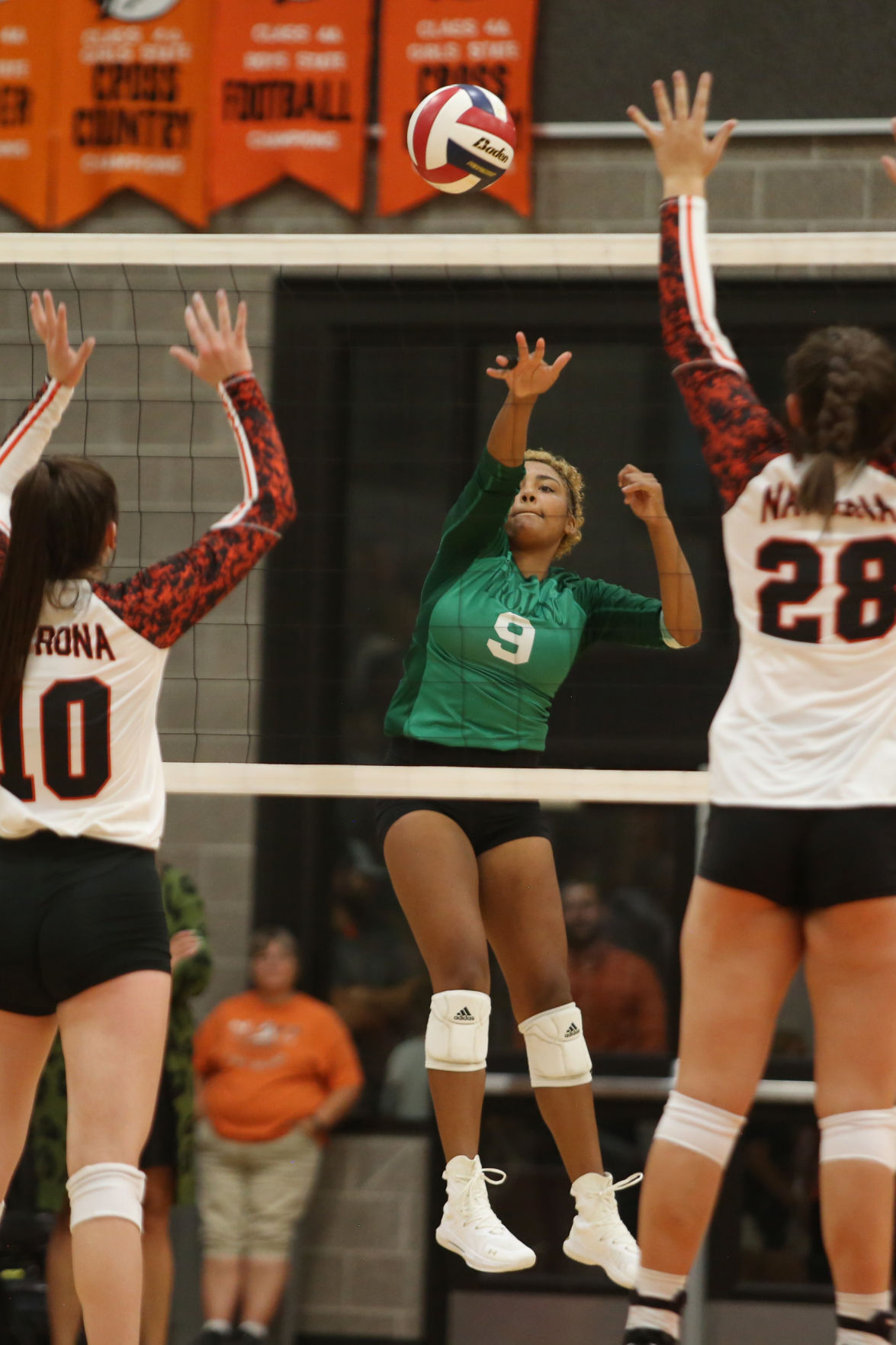 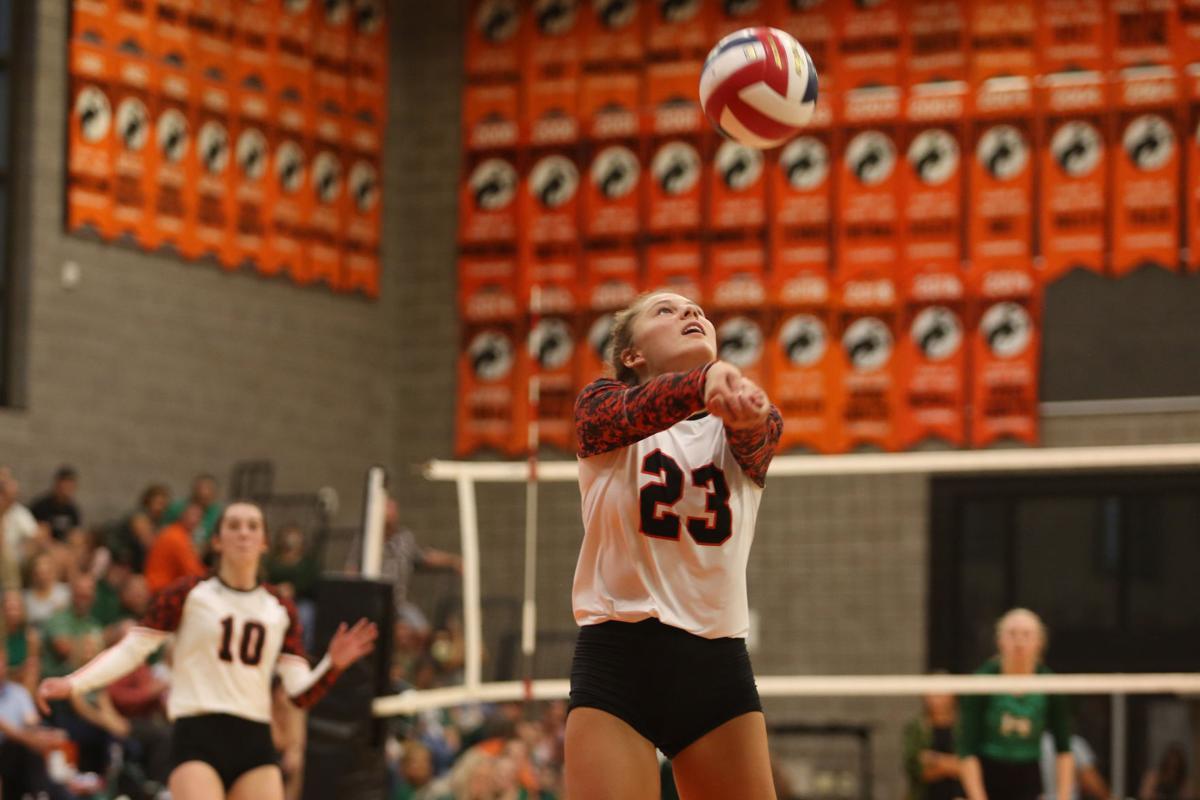 Natrona County's Emma Patik bumps the ball in the Fillies' match against Kelly Walsh on Thursday in Casper.

After Megan Hagar’s block at the net gave Natrona County a 24-22 lead Thursday in the second set against crosstown rival Kelly Walsh, the host Fillies were in prime position to even the match at one set apiece.

The Trojans’ Peyton Carruth had other ideas. The junior outside hitter drove a shot down the line that tipped off a Filly and went out of bounds. The Natrona County student section, which thought the ball went out of bounds without being touched, started cheering. But when the official awarded the point to Kelly Walsh it was Carruth’s turn to cheer. She turned to the NC students and let out a yell.

Moments later, Paighton Dedic’s kill gave the Trojans a 26-24 victory. The third set proved to be merely window dressing as Kelly Walsh built a 17-3 lead before completing the sweep with a 25-14 victory.

“Peyton plays with a lot of energy and the team really does feed off of that,” said KW assistant coach Britnee King, filling in for head coach Jeff Barkell, who was home with his newborn daughter. “Her attitude kind of sets the tone for how things are going to go.”

Carruth had five kills in the first set, including a cross-court blast that put the brakes on a short Natrona County run and gave the Trojans a 23-17 lead. Senior Shelby Ramage finished off the opening set with a kill through the middle of the Fillies’ defense.

“This is always a tough game,” Carruth said. “I think NC put up a really good fight, but we came into the game knowing we have the bar set high because we haven’t lost to them in a while.”

The second set was a back-and-forth battle early before KW junior Abi Milby had consecutive kills and senior Logann Alvar found on open spot on the NC side of the court to cap a 4-0 run for a 10-7 advantage. Kills from Carruth and Ramage helped keep the Fillies at bay, and a combined block from Carruth and CJ Eskew pushed the Kelly Walsh lead to 16-13.

The Fillies came roaring back, however. With Hagar and senior Alesha Lane controlling the net and the Trojans committing some uncharacteristic errors, Natrona County went on a 7-1 run to lead 20-17. A kill from senior Tamryn Blom and two more unforced errors by Kelly Walsh made it 23-21.

That just set the stage for Carruth, who had six kills in the set, and her teammates.

“We just fell into a hole that we sometimes do,” Milby said of the mid-set lull, “but we always do a great job of picking it back up in those situations.

“The crowd gives us energy,” she added. “We feel like we can get it done whether it’s our home crowd, or another team’s student section going against us or even without a crowd.”

While the Trojans celebrated on NC’s home court, the Fillies were left to wonder if the final outcome would have been different if they had held on to win the second set.

“That second set kind of slipped through our hands,” NC head coach Adrian McNamee said. “We went from playing aggressive to playing not to lose those last few points.

“Once they got that win we felt like it was out of our hands and we kind of shut down verbally, we shut down physically and we shut down emotionally. And when you do those three things in volleyball you’re not going to win.”

McNamee added that while the Fillies have made steps in the right direction through the first two-plus weeks of the season, they still have some mental hurdles to overcome.

“We’ve got to get over what the name on the (opposing) jersey says,” she said. “We’ve got to play our game and worry about what we can do to contribute to the betterment of our team.”

The Fillies have a week to figure it out as they don’t return to the court until a road trip next weekend to face Green River and Rock Springs.

The Trojans, on the other hand, jump right into 4A Northeast Conference play with a home match against Sheridan on Friday.

After losing to Laramie in last year’s state championship match, Kelly Walsh is looking to maintain its momentum and make another run at the title. Carruth believes the Trojans have what it takes to do that.

“Abi and I do so well on the outside,” she said. “And with Paighton and Logann and Shelby in the middle, and the best libero (Bailey Owen), we all just play together so well.

“Sometimes we get into our heads a little bit,” she added, “but we just have to relax and play our game.”

BATTLING BACK: With NC leading 24-22 in the second set, KW junior Peyton Carruth sparked a 4-0 closing run to give the Trojans the 26-24 victory.

SHE SAID IT: "Peyton plays with a lot of energy and the team really does feed off of that." -- KW assistant coach Britnee King.

Prep golf’s abbreviated season came to an end last weekend, but the remaining five fall sports will all be in action this weekend, highlighted…

Trojans return everyone from last year's team that finished as state runner-up.

Fillies return five players who either started or were part of the rotation last year.

Kelly Walsh's Cydney Eskew tips the ball over the net as Natrona County's Brynn Sybrant tries to block during their match Thursday at NC's Jerry Dalton Gym in Casper.

Natrona County's Emma Patik bumps the ball in the Fillies' match against Kelly Walsh on Thursday in Casper.