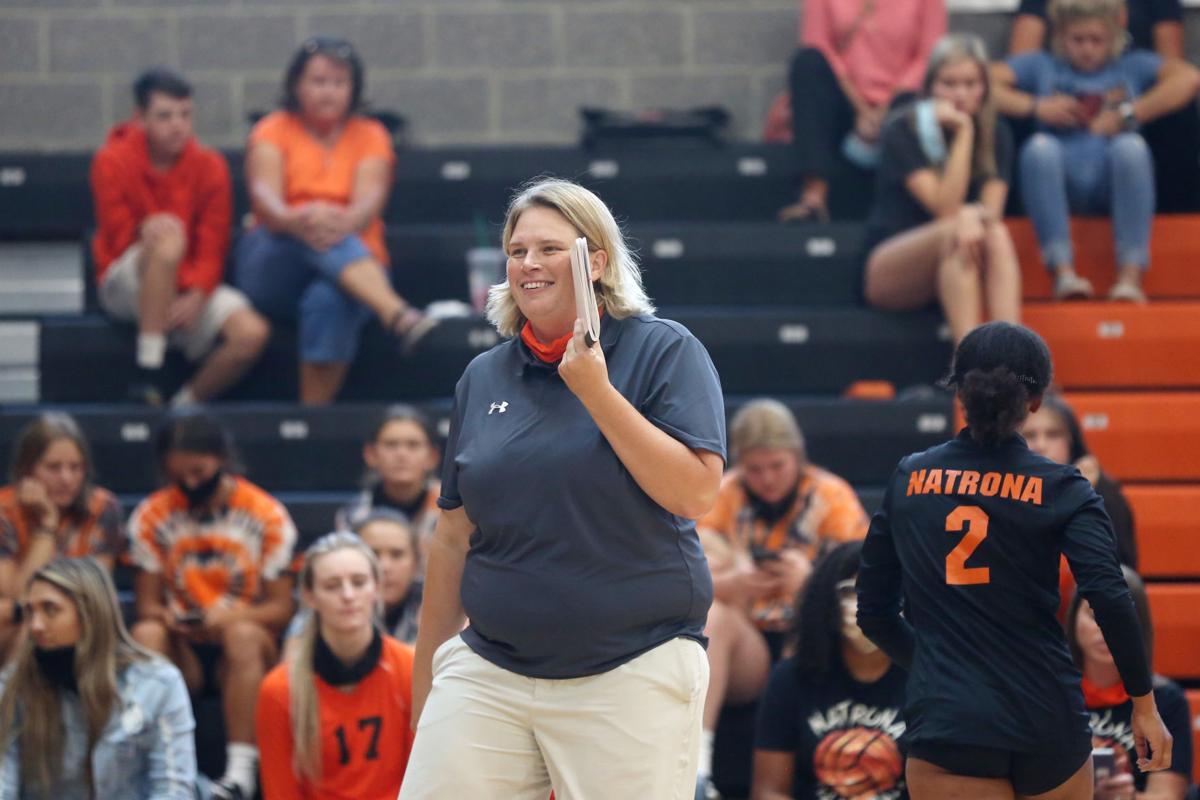 Natrona County volleyball head coach Adrian McNamee instructs her team from the sidelines during the Fillies match against Sheridan on Aug. 29 in Casper. 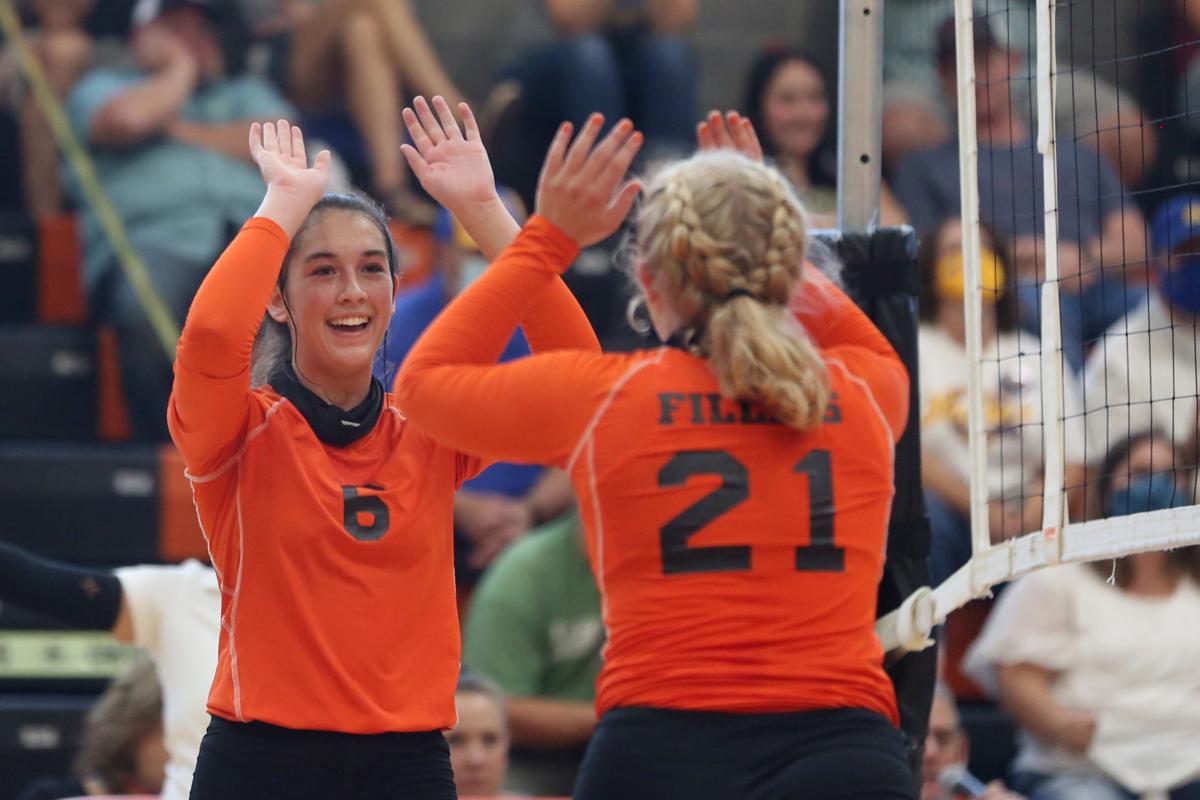 Natrona County's Tamryn Blom (21) and Megan Hagar celebrate after the Fillies scored a point in their match against Sheridan on Aug. 29 in Casper. 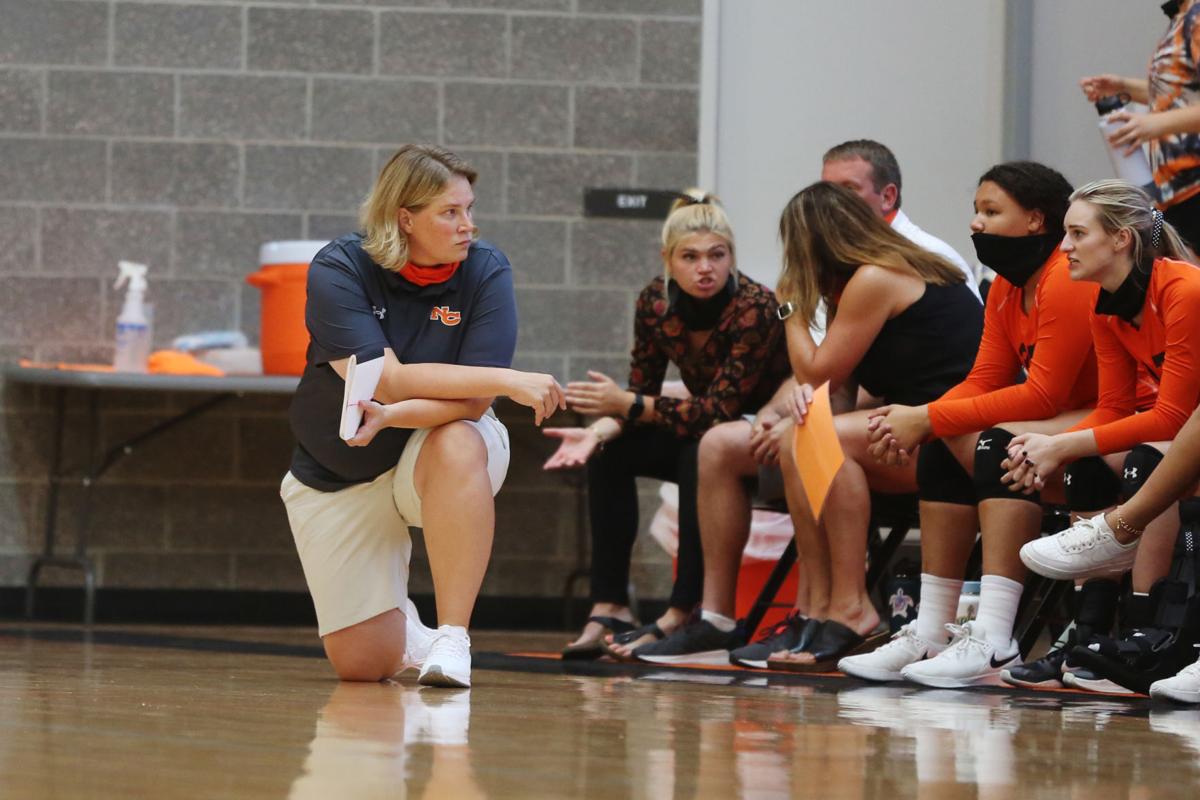 Adrian McNamee, the head coach for the Natrona County volleyball team, kneels on the sidelines during the Fillies match against Sheridan on Aug. 29 in Casper.

Adrian McNamee thought she was ready for the moment. And then she walked onto the court at Jerry Dalton Gym for the first time as the head coach of the Natrona County Fillies volleyball team.

“I was shaking a little bit,” McNamee admitted. “It really gave me the chills.”

The feelings were understandable. McNamee graduated from Natrona County in 2001 and was a member of the Fillies’ back-to-back state championship teams in 1998-99. After serving as the head coach at Riverton and an assistant coach at Casper College, McNamee’s volleyball journey came full circle last Saturday when the Fillies opened their 2020 season with a two-game sweep of Sheridan.

“It’s one thing to come back and coach at your old school,” she said, “but it’s completely different when you know that your team is taking the court and they’re the first ones that have touched the court since March. It was a really cool moment that our team and our program was the first one out there.”

McNamee knows the Fillies have a lot of work ahead to get to where they want to be. That was evident later Saturday when they lost in straight sets to Laramie. With just two-plus weeks of practice under their belts, the Fillies were unable to solve the Plainsmen.

“When we got pushed by Laramie we reverted back to old habits,” McNamee said. “So we found out that it’s going to take a little bit more time to get rid of those old habits and keep building them to what we want them to be.”

McNamee, and the players, expect Natrona County to get there, even if it remains a work in progress at this point. The roster is filled with upperclassmen, but only a handful were part of the team’s rotation last year, when the Fillies went 14-18 and failed to qualify for the state tournament for the first time since 2011.

After Tuesday’s practice, McNamee let the players know their effort that day wasn’t where it needed to be. The Fillies agreed.

“I definitely like that she is going to be straight up with me,” senior Quinci Mooren said. “If I’m being lazy she’s going to tell me. I know that she’s always going to push me to be my best and that I’m always going to give her what she wants from me. And that’s exactly what this team needs.”

The team also expects to feed off McNamee’s energy. On the sidelines, McNamee has never been afraid to let her voice be heard, whether she’s shouting encouragement or instructing players on where they need to be.

“Her intensity level is making a really big impact on us,” senior Anna Fink said. “It shows that we’re here to win and we can make it to state.”

For now, it’s the goal the Fillies are working toward. McNamee believes Natrona County “has the tools to beat those top teams,” but it is still figuring out the mental aspect of the game.

“It’s the little things that win you the big trophy,” she said. “And if we can get that through their minds and they can carry that over onto the court I think we could be deadly. The raw skill is there, now we just need to refine it.”

It might not happen this year, or even in the near future, but McNamee knows what the Fillies are doing now will pay dividends in the future. Natrona County has won six state championships overall, but hasn’t won it all since 2013. McNamee doesn’t hesitate to remind her team the program’s ultimate goal is to win championships and hang another banner to add to the ever-growing collection of state championship banners in Jerry Dalton Gym.

BUILDING BLOCKS: McNamee has stressed the mental aspect of the game to her team, which failed to qualify for the state tournament last year.

SHE SAID IT: "It's the little things that win you the big trophy." -- McNamee.

The names may have changed, but the end result was all too familiar Thursday in the crosstown volleyball match between rivals Kelly Walsh and …

Natrona County volleyball head coach Adrian McNamee instructs her team from the sidelines during the Fillies match against Sheridan on Aug. 29 in Casper.

Natrona County's Tamryn Blom (21) and Megan Hagar celebrate after the Fillies scored a point in their match against Sheridan on Aug. 29 in Casper.

Adrian McNamee, the head coach for the Natrona County volleyball team, kneels on the sidelines during the Fillies match against Sheridan on Aug. 29 in Casper.