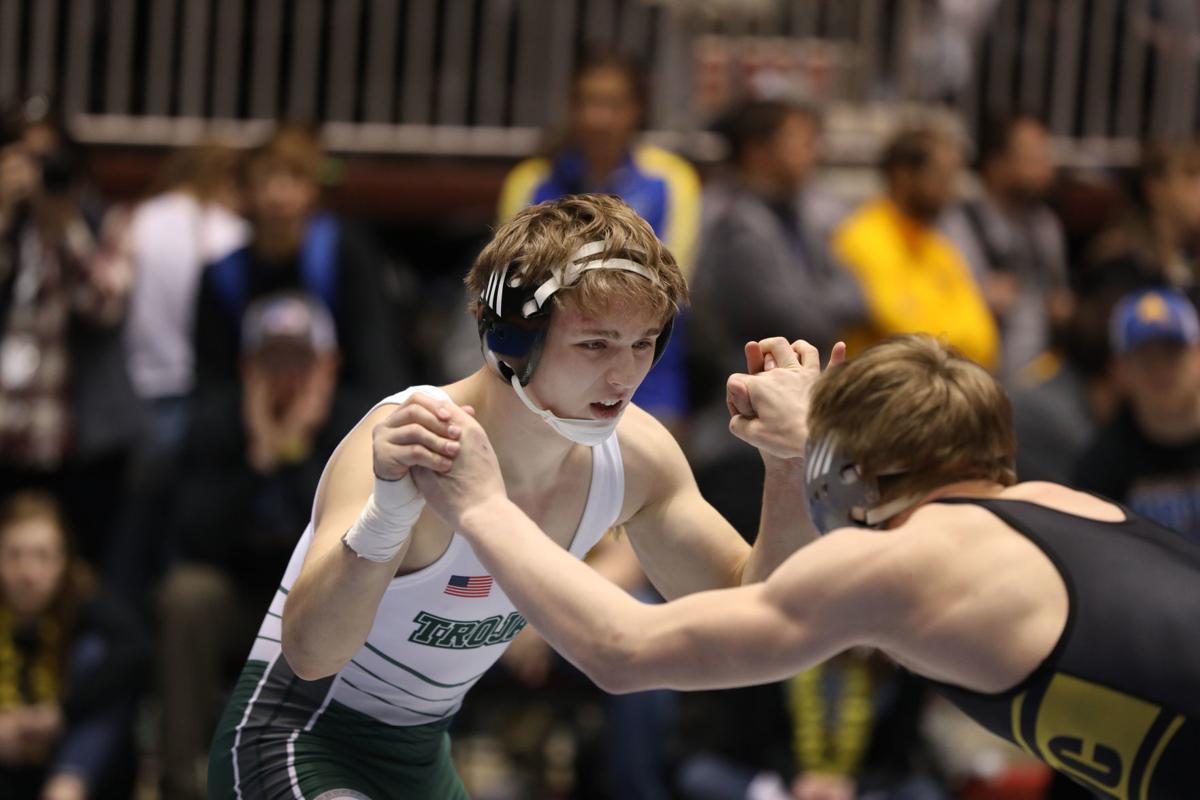 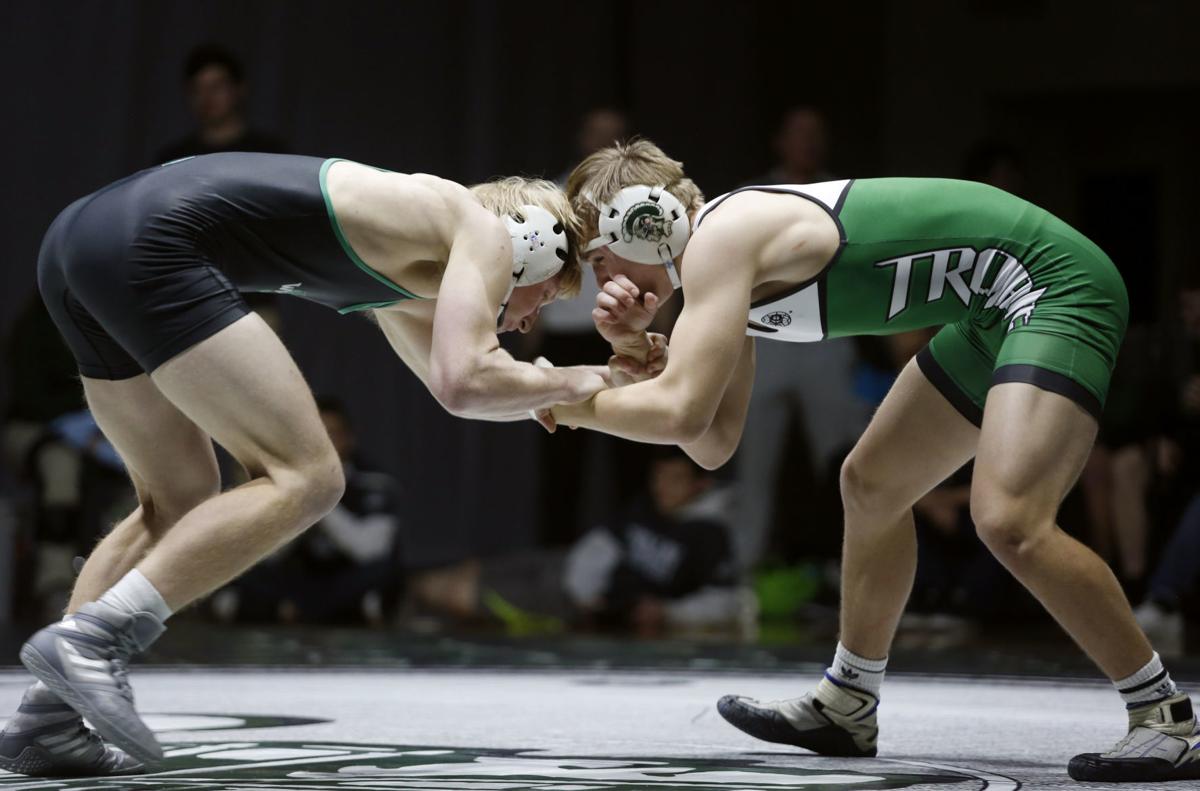 Kevin Anderson’s improvement on the wrestling mat served as a measuring stick to the successes of the Kelly Walsh program.

As a freshman, Anderson failed to qualify for the state tournament and the Trojans finished sixth in Class 4A. That’s hard to fathom now after Anderson – a state champion for the two-time defending state champion Trojans – committed this past Sunday to wrestle at the University of Wyoming.

“I think I’ll become the best version of myself at UW,” Anderson said in a phone interview Tuesday. “Plus, I get to wrestle for my home state.”

Anderson’s transformation from a Trojan to a Cowboy definitely had some ups and downs, though.

“It’s pretty tough to not qualify for state,” Kelly Walsh head wrestling coach Travis Peak laughed. “I think that kind of made him mad.”

The following year Anderson placed fourth at 145 pounds and the Trojans were state runners-up, finishing 10.5 points back of Cheyenne East. Building off that success, Anderson established himself as the best 160-pound wrestler in the state as a junior. He won the prestigious Ron Thon Memorial and the 4A West Regionals to help Kelly Walsh win both team titles for the first time in program history.

“Kevin was close his sophomore year,” Peak said. “And his junior year we absolutely knew he was the best dude in the state.”

Anderson entered the 2019 Wyoming State High School Class 4A Wrestling Championships with a 47-9 record. He was ranked No. 1 at 160 pounds. Then he got pinned in the quarterfinals by Sheridan’s Brenden Clem.

“He just made a mistake in the quarterfinals and got pinned,” Peak recalled. “He wrestled that kid for third place and absolutely destroyed him. But finishing third made him hungry again.”

Anderson’s third-place finish, combined with state titles for teammates Jace Palmer, Analu Benabise, Josh Kraus and Kole Kraus gave the Trojans their first team championship. With all but Josh Kraus returning this past season Kelly Walsh was on track to go back-to-back. But in early January at the Doc Buchanan Invitational in Clovis, California, Anderson suffered a spiral fracture in his hand.

“I got taken down with a double-leg and I just landed on my hand weird and it broke,” Anderson stated matter-of-factly.

Thankfully for Anderson, and the Trojans, Kelly Walsh assistant coach Dr. Dan White was able to perform surgery on the hand three days later when the team returned to Casper.

“When Kevin broke his hand in California my heart kind of sunk for him because state was not that far away and he’s a senior,” Peak said. “He could have melted a little bit and lost track of his goals, but he didn’t. Dr. Dan White deserves a lot of credit.

“We put together a lot of workouts for Kevin and he did a lot of running and shadow wrestling so that when his time came he would be ready to jump right in.”

Anderson returned to competition in February. He earned a 7-5 decision over eventual state champ Hayden Crow of Sheridan in a dual and then helped lead the Trojans to their third consecutive Miller Cup crown with a 13-1 major decision over Natrona County’s Conner Worthen.

Anderson added a West Regional title to his resume before finally winning the elusive individual state gold medal with a 6-4 decision over Cheyenne East’s Jackson Hesford.

“It took a lot of hard work and staying focused,” Anderson offered.

Those are two traits Anderson has always had, according to Peak.

“Kevin has been a special dude the whole time he’s been here,” he said. “We knew he was going to be a solid addition to the team because he was smart, he was tough and he was hardworking.

“There weren’t many mornings where he didn’t come work out with me, whether it was during the school year or in the summertime. He went to camps, open mats … He never missed an opportunity to get better. We knew that he could get a title.”

That title came on Feb. 29. But the Trojans’ quest for a repeat title seemingly fell short as Green River was originally crowned the 4A champ before a scoring error was discovered that gave the team championship to Kelly Walsh.

“That night we were at dinner and I got a call from Coach Peak and (Kelly Walsh activities director) Mr. Nathan and they told me, ‘Hey, they messed up the scoring and we won,’” Anderson recalled. “I told everyone and we just flipped out. There were 30 voices in this restaurant screaming.”

Things have been a little quieter for Anderson and the rest of the students around the state recently. Less than two weeks after the state wrestling championships the Class 3A/4A basketball championships were canceled because of the coronavirus pandemic. Since then, the Wyoming High School Activities Association Board of Directors canceled the spring sports season and all schools were closed, forcing students to learn virtually from home.

“I’ve been able to sit back and take advantage of this time,” Anderson said. “It’s helped me realize that there’s more to life.

“Thankfully, we got to finish our season. Right now I’m doing everything I can to make sure I’m ready to go when I get to UW.”

Peak, who has seen Anderson make the transformation from a non-state qualifier to a Division I signee in just four years, has no doubt Anderson will be ready for this next step.

“The thing that makes me optimistic about Kevin wrestling at the next level is that I don’t think we’ve seen him reach his potential,” Peak said. “The mental and physical toughness it takes to go through a broken hand and come back and win a state title is not something an average athlete can do. I still don’t know what his peak is.”

TURNING THINGS AROUND: Kelly Walsh senior Kevin Anderson, who didn't qualify for state wrestling as a freshman, won a state championship in his final season.

HEADING TO LARAMIE: Anderson recently committed to the University of Wyoming, where he will wrestle in the fall.

HE SAID IT: “The thing that makes me optimistic about Kevin wrestling at the next level is that I don’t think we’ve seen him reach his potential.” -- KW head coach Travis Peak.

With state title in hand, Thunder Basin's Carr is ready for the next level

State champion will wrestle at the University of Wyoming next season.

DeLong is first Moorcroft wrestler to sign with a Division I program.

Riverton's Ridge Briggs and the wrestling practice that changed everything

Briggs finished his Wolverine career as a three-time state champion.

The Ron Thon Memorial Invitational, Rumble In The Rockies, Wyoming state tournament — these are some of the biggest wrestling tournaments avai…