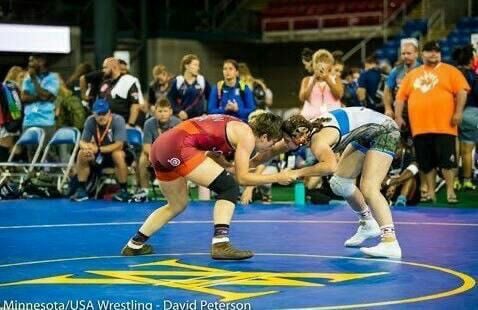 Moorcroft's Charmayne DeLong is shown competing at a national tournament. 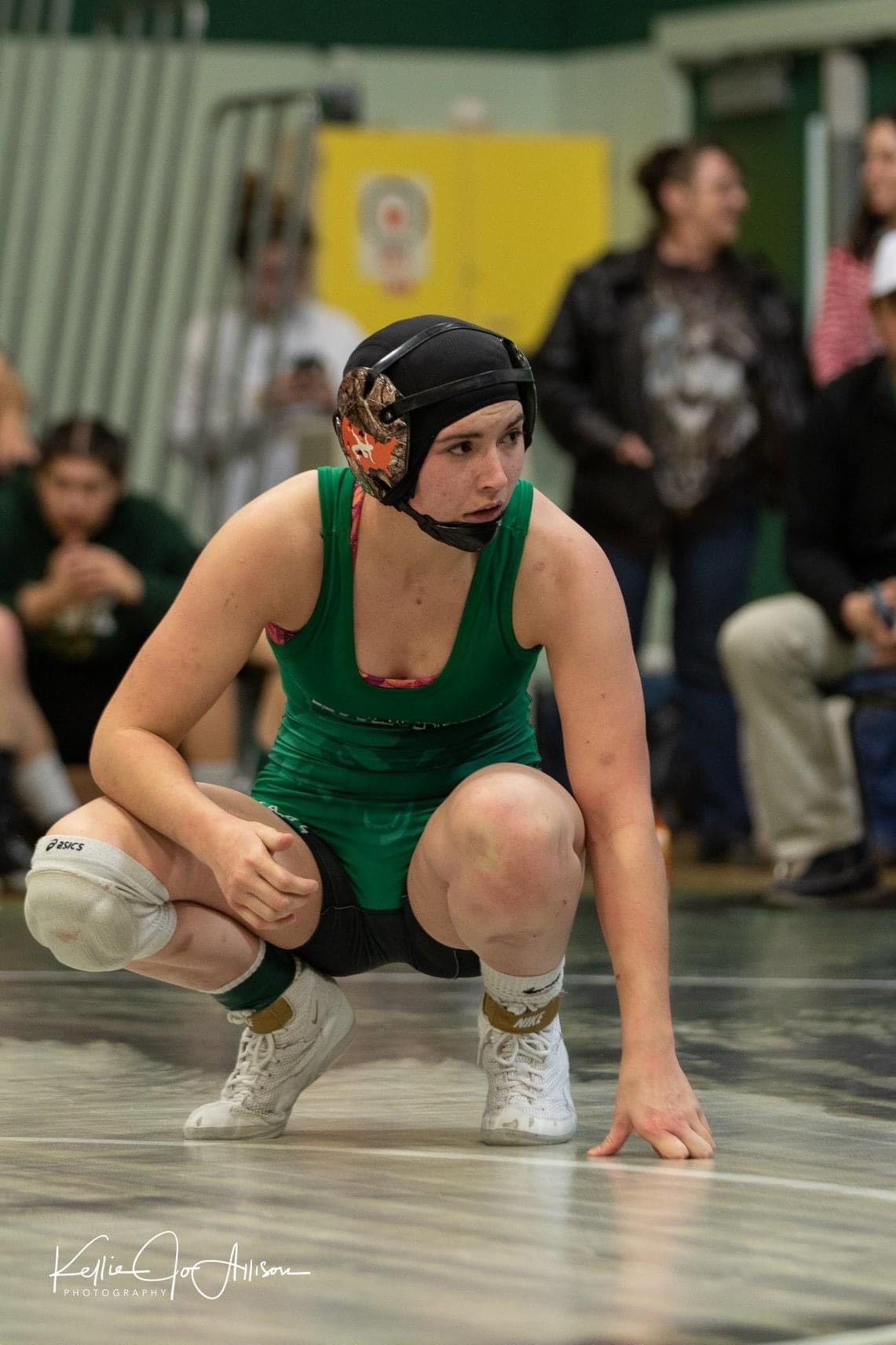 Moorcroft's Charmayne DeLong takes a break during a match earlier this season. 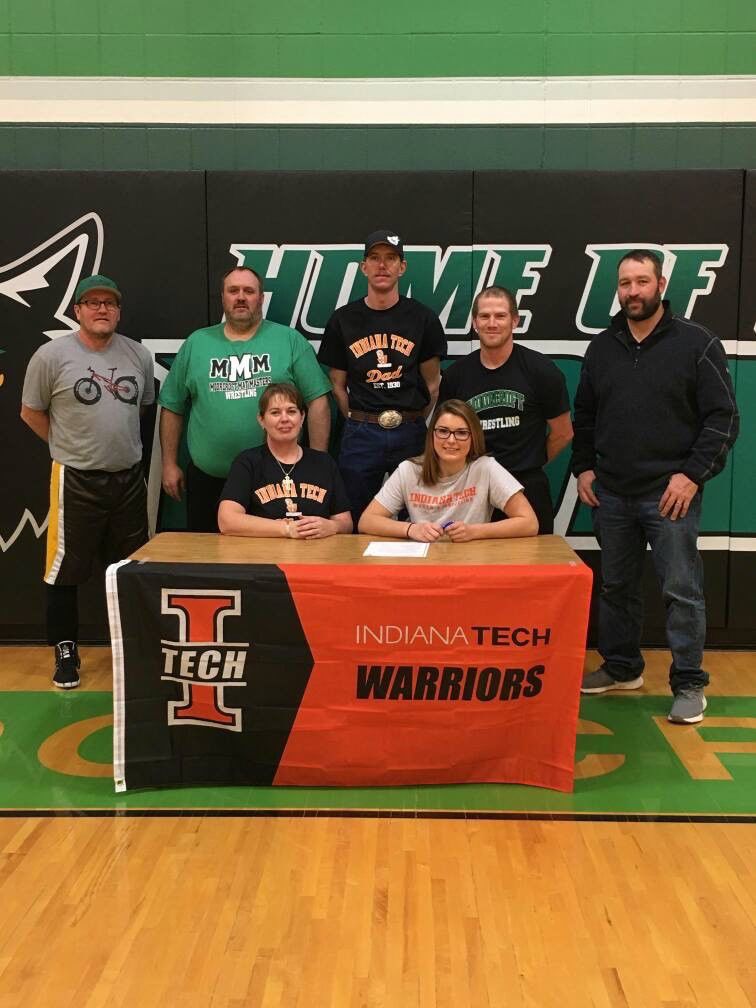 Moorcroft's Charmayne DeLong, bottom right, signs her Letter of Intent to wrestle at Indiana Tech College while surrounded by her parents and Moorcroft wrestling coaches.

A freshman at Moorcroft High School at the time, DeLong got sick before the 2017 Class 2A East Regional meet and had to watch from the stands as the Wolves won the team title and went on to win their fifth consecutive state championship the following week.

“My freshman year was the worst,” DeLong admitted in a phone interview Thursday. “That was definitely a moment when I wanted to quit, but (Moorcroft head coach) Charlie (Williams) convinced me to stay.”

The talk paid off.

DeLong qualified for state her last three years at Moorcroft – winning four matches competing at the 120-, 126- and 132-pound weight classes – while also making a name for herself at national tournaments. Her success on the mat and her dedication didn’t go unnoticed, which is why DeLong recently signed with Indiana Tech College, an NAIA school in Fort Wayne, Indiana. Making the signing even more impressive is that DeLong is the first Moorcroft wrestler, and likely the first female wrestler from Wyoming, to sign with a Division I program.

“Wrestling at Moorcroft and at national tournaments really got me ready for the next level,” DeLong said. “I had the coaches pushing me to be better and they just made me a better wrestler.

“I could just see the growth … making it to state and making the podium at a few tournaments prepared me a lot for college.”

DeLong originally wanted to attend Southern Oregon University, which finished eighth at the first NAIA National Invitational in March. But then Southern Oregon assistant coach Paul Rademacher, who had been in contact with DeLong since her sophomore season, took the head coaching position at Indiana Tech on April 8.

“Southern Oregon was kind of my dream college and that’s where I met Coach Rademacher,” DeLong said. “And when he transferred over to Indiana Tech I just followed him there because I think he’s a good coach.”

So after four years of being a contributor for a well-established state powerhouse, DeLong is now being looked on as a leader for a first-year program.

“We’re a brand-new program,” Rademacher said. “The school gave me a year to recruit and that was one of the things that made this job attractive to me. It was a well thought-out plan of, ‘Hey, let’s make this competitive right away.’

“I’m excited about the 25-30 girls we have coming in for our recruiting class and Charmayne is definitely going to be one of the leaders. She has a lot of national tournament experience, which is an important part of what she brings to our program.”

It was at those national tournaments where Rademacher first noticed DeLong, who was competing for the Moorcroft Mat Masters.

“When I was at Southern Oregon she was super-interested in wrestling there so I knew I wanted to stay in touch with her,” Rademacher said. “And then I was at an event and I met her and realized she was someone we wanted on our team.”

Those tournaments also gave Rademacher an opportunity to watch, and sometimes coach, DeLong firsthand, which only strengthened his belief that he needed her on his team.

“Charmayne has a lot of variety in her attacks,” Rademacher offered. “She knows a lot of things, and that helps. I saw those things when I watched her matches on film. And then when I did get to meet her she was really coachable and was willing to take instructions, and that’s something that I look for in all my athletes.”

DeLong is ready to take the next step in a wrestling career that began when she was in third grade and was forced to go to her older brother Casey’s wrestling practices. But she got tired of watching and joined the USA Wrestling program in Moorcroft shortly after that. And, outside of that blip at the end of her freshman season, DeLong is leaving the Moorcroft program with fond memories.

DeLong is ready for a new challenge, however. And the fact that she is blazing a trail for female wrestlers in Wyoming adds a new wrinkle to the equation.

“I’m really excited because I get to be part of the first women’s wrestling team at Indiana Tech,” she said. “I think with the group of girls we have coming in in the fall it’s going to be a great way to start the program at the university.

“And it will be different because in my eighth-grade year I never wrestled another girl from Wyoming,” she added. “I hadn’t really noticed the growth, but at state weigh-ins this year it was pretty cool to see the number of girls that were there to wrestle. It’s definitely grown a lot since my eighth-grade year.”

MOVING ON: DeLong has signed to wrestle at Indiana Tech, an NAIA program.

SHE SAID IT: “Wrestling at Moorcroft and at national tournaments really got me ready for the next level.” -- DeLong.

With state title in hand, Thunder Basin's Carr is ready for the next level

State champion will wrestle at the University of Wyoming next season.

Riverton's Ridge Briggs and the wrestling practice that changed everything

Briggs finished his Wolverine career as a three-time state champion.

Moorcroft's Charmayne DeLong is shown competing at a national tournament.

Moorcroft's Charmayne DeLong takes a break during a match earlier this season.

Moorcroft's Charmayne DeLong, bottom right, signs her Letter of Intent to wrestle at Indiana Tech College while surrounded by her parents and Moorcroft wrestling coaches.