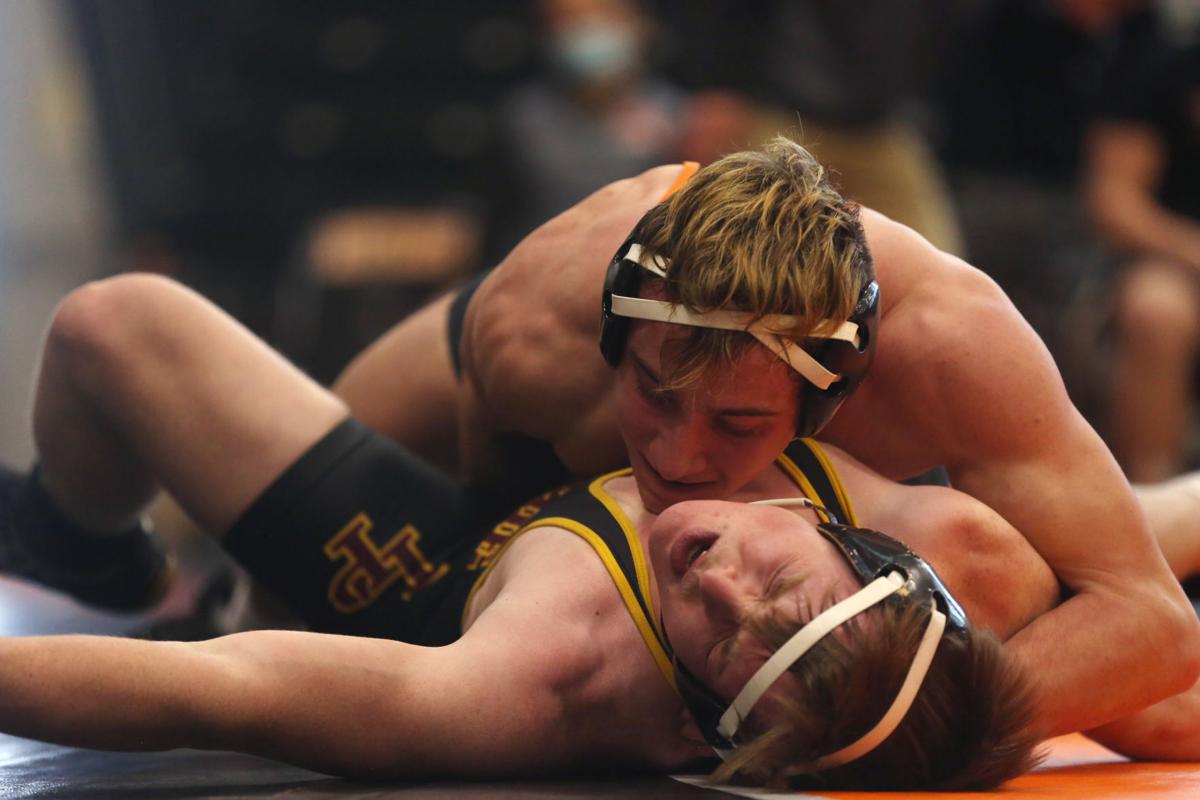 Alec Contros of Laramie tries to break free from a hold by Rhett Buhler of Natrona County in their 160-pound match Friday in Casper. 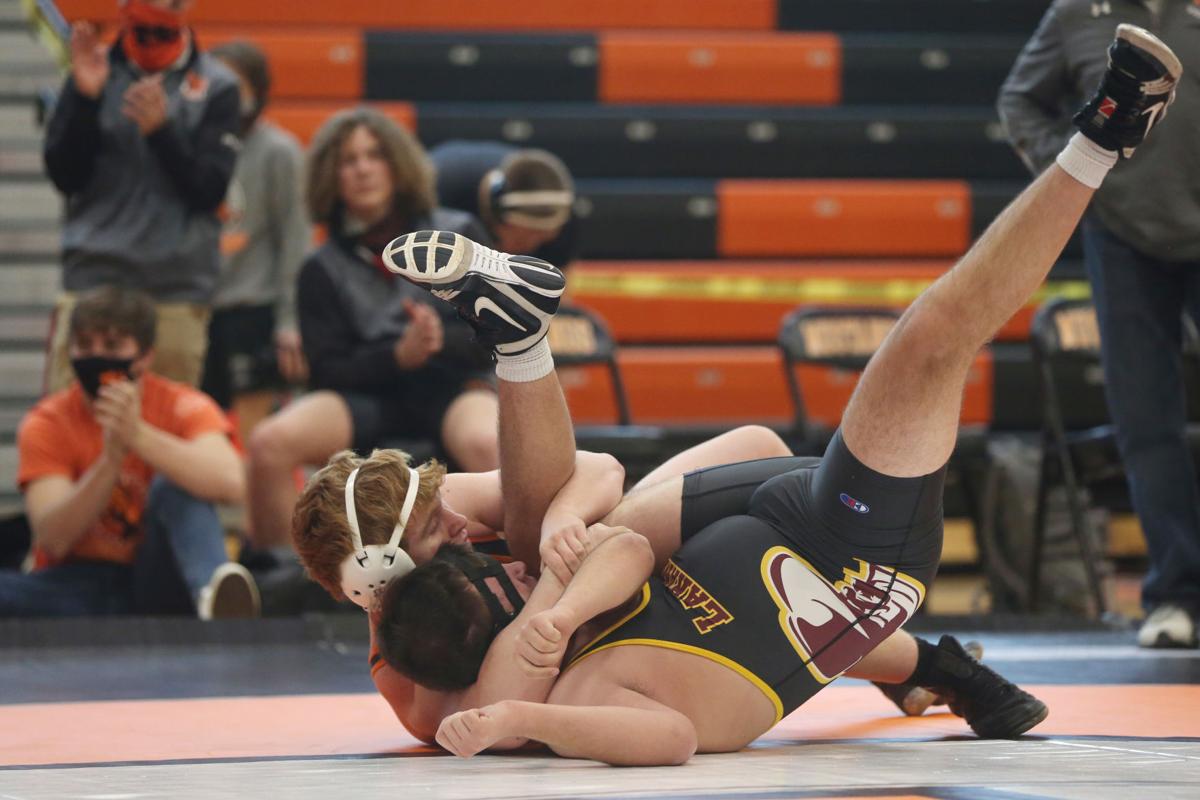 Natrona County's Davis Knight gets in position to pin Laramie's Adam Beauvais  in their 19-pound match Friday in Casper. 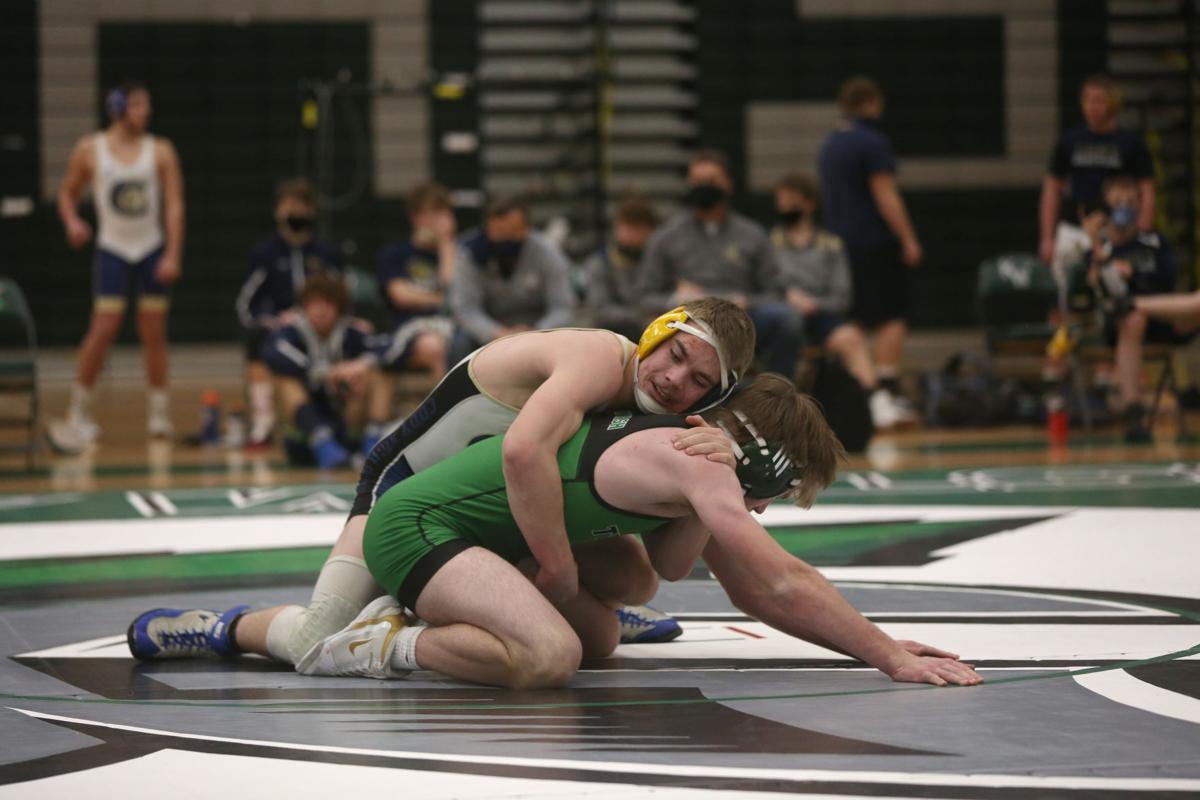 Cody's Will Thomasson tries to keep control of Kelly Walsh's Sam Henderson during their 170-pound match Friday at the Trojan Border Wars in Casper. 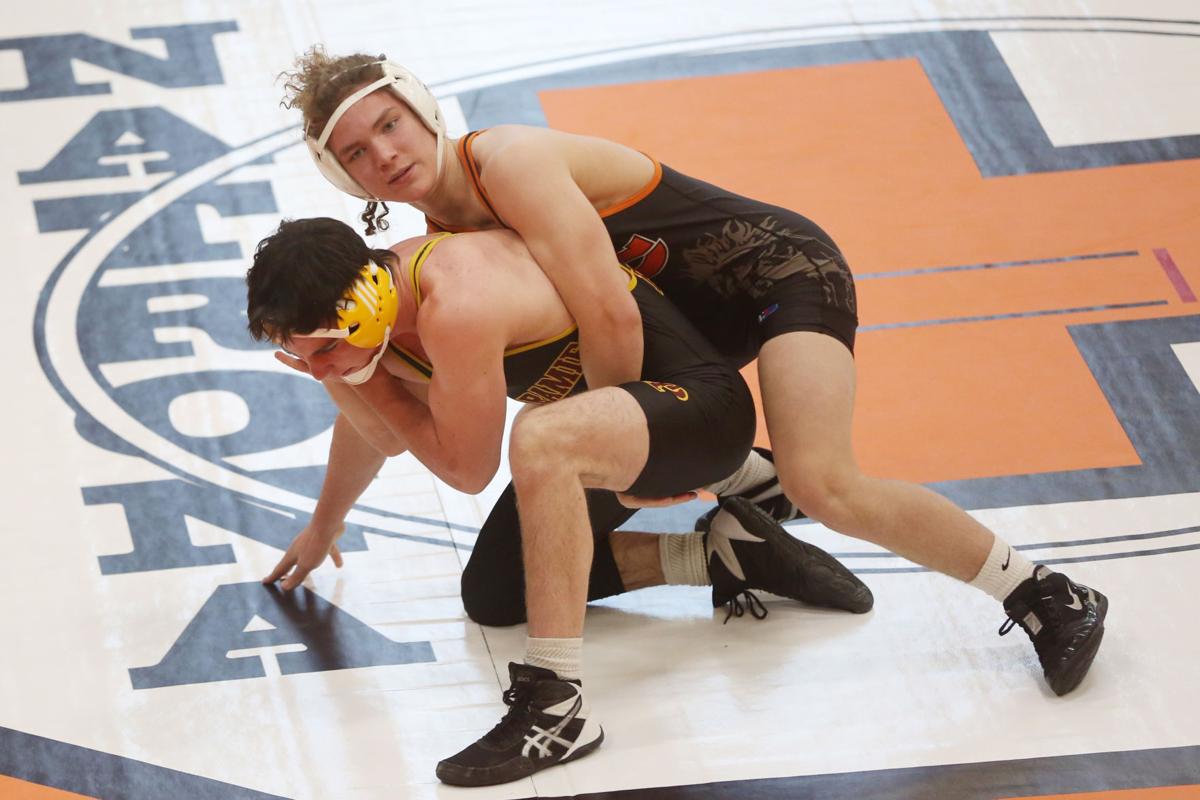 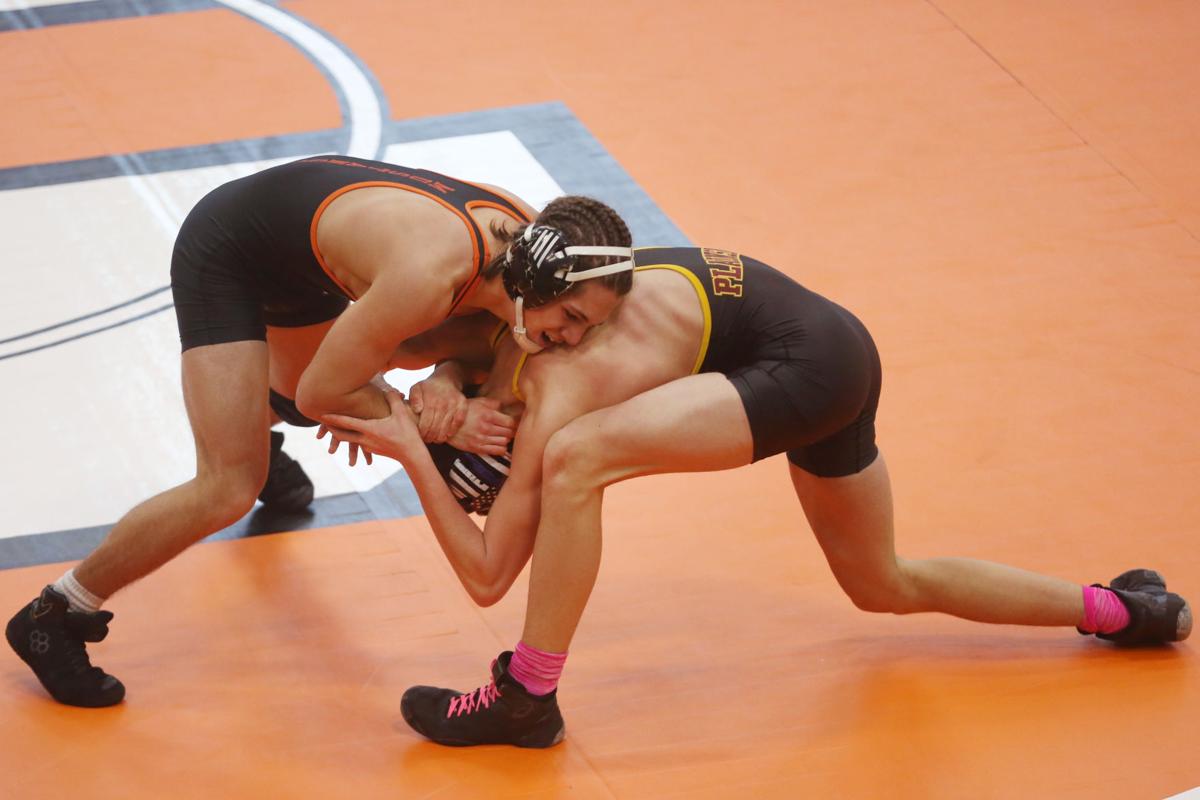 Two months into the 2020-21 wrestling season and Natrona County is still waiting to put its best lineup on the mat. But that hasn’t stopped the Mustangs from putting together an impressive season to this point.

At the Trojans Border Wars on Friday, Natrona County won 12 of 14 matches — two by forfeit — against Laramie in rolling to a 68-12 victory. The Mustangs also defeated North Platte, Nebraska, 37-33 and wrestled Thunder Basin later Friday.

Junior Kaeden Wilcox got things started for Natrona County with a first-period pin of Chris Alvarez. That set the tone for the match as the Mustangs won eight matches by pinfall and two others by major decision.

“So far we haven’t really gotten our team together yet,” NC head coach Scott Russell said. “So the cool thing is seeing people step up in situations they don’t normally face. We’ve got junior varsity guys going out there competing in varsity. They’re not normally on varsity, but they’re out there trying hard.”

The Mustangs entered the weekend on the short list of Class 4A state title contenders. They’ve already defeated Cheyenne East this season and dropped close matches against both Sheridan and Thunder Basin. They’re looking to turn things around with the return of senior Landen Roberts and juniors Dylan Brenton and Brendyn Nelson. Both Brenton and Roberts finished sixth at last year’s state meet, in which Natrona County placed fifth.

Brenton and Roberts were two of 12 NC wrestlers who ended the season on the podium. Senior Cyruss Meeks, who won his 145-pound match Friday by forfeit, is currently atop the wyowrestling.com rankings at 145. Wilcox placed second at 145, while junior Tate Tromble was third at 106 and senior Nathaniel Sausedo was third at 126. Sausedo fell behind in his 126-pound match Friday before taking control and eventually pinning Laramie’s Dakota Ledford midway through the second period.

“I just want to outwork everyone and stay healthy,” Sausedo said after the match. “Everybody on this team pushes me to make me a better wrestler.”

Sausedo was one of six seniors to register victories against the Plainsmen. Other seniors posting wins were Rhett Butler (9-1 major decision at 160), Davis Knight (pin at 195), Colter Helm (pin at 220) and D’Anthony Smith (pin at 285).

Those added bonus points have been key to a number of dual victories this season.

“Those guys have been going out and scoring a lot of points for us,” Russell acknowledged. “The veteran guys that have been wrestling are doing a little bit extra to help our team win; they’re getting pins and tech falls.”

Obviously, those bonus points can make the difference in more-competitive duals. And with the state tournament on the horizon — Feb. 27 at the Casper Events Center — those bonus points combined with a healthy and complete Natrona County roster could be what lifts the Mustangs to their first state title since 1984.

“We’re getting healthy,” Meeks said. “And when we do then everybody is going to see our best team. We’ve been putting in the extra work, things like morning practices and lifts and getting everyone involved, so we can be at our best when we need to be.”

ON THE RISE: Natrona County, which opened the dual meet with a 68-12 victory against Laramie, is still waiting to field a full team.

HE SAID IT: "We're getting healthy. And when we do then everybody is going to see our best team." -- NC senior Cyruss Meeks.

SATURDAY: Action gets underway at 9:30 a.m. at both Kelly Walsh and Natrona County.

State wrestling: Class 2A First on the Floor

Alec Contros of Laramie tries to break free from a hold by Rhett Buhler of Natrona County in their 160-pound match Friday in Casper.

Natrona County's Davis Knight gets in position to pin Laramie's Adam Beauvais  in their 19-pound match Friday in Casper.

Cody's Will Thomasson tries to keep control of Kelly Walsh's Sam Henderson during their 170-pound match Friday at the Trojan Border Wars in Casper.