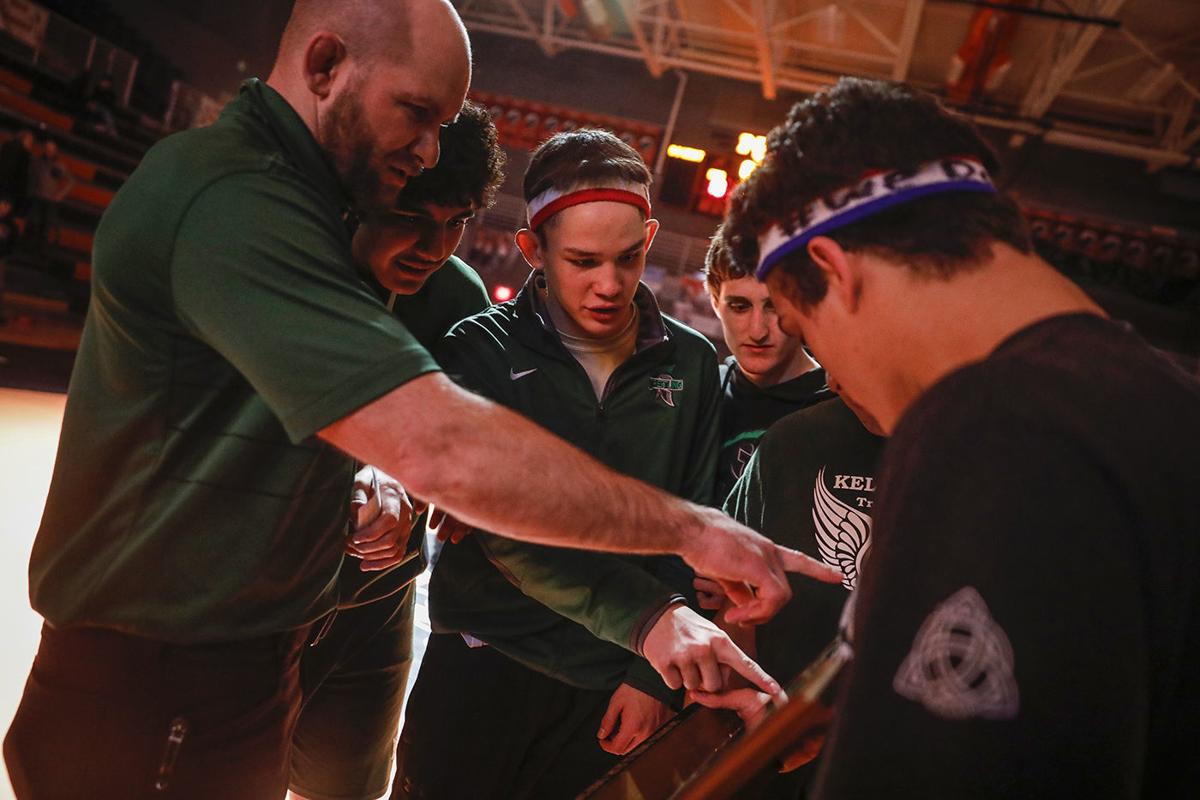 Kelly Walsh head wrestling coach Travis Peak and some of his wrestlers look at the Miller Cup Trophy after they defeated rival Natrona County in the annual dual on Feb. 7 at Jerry Dalton Gym in Casper. 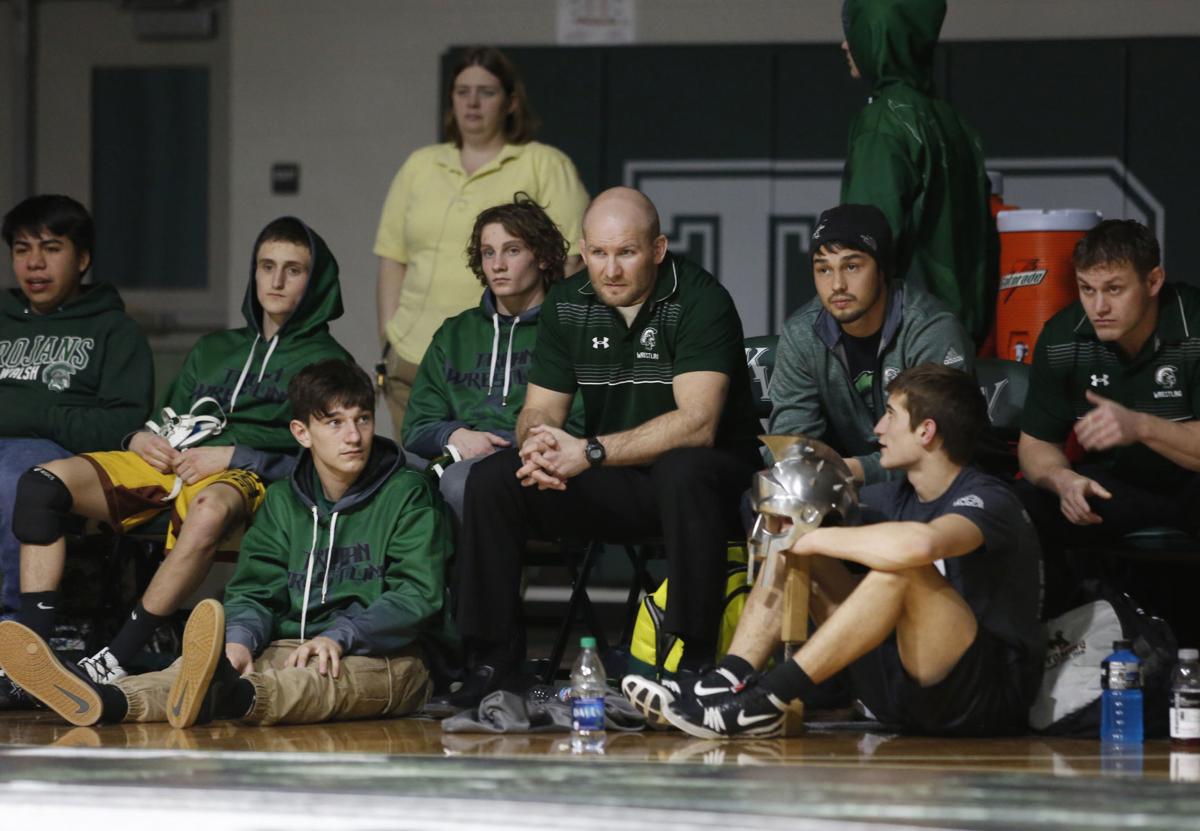 The lights were off in the Kelly Walsh wrestling room when the first few wrestlers strolled into a practice earlier this week and set up a Spikeball net. They played as many games as they could, even drawing in assistant coaches on the fun. A few more wrestlers trickled in and watched while lacing their boots against one of the padded walls.

Following a brief lull, head coach Travis Peak walked through the threshold and turned the lights on. More wrestlers materialized through the door, getting ready for the fun week of practice that typically leads up to the state wrestling tournament. Peak, in his fifth year at Kelly Walsh, explained that he’s gotten the cold shoulder from those hosting “Red Hot Yoga” and if that were to fall through they’d watch a movie instead. He then told the wrestlers to take care of themselves as a handful of the Trojans’ usual squad was at home with illness. They would all be needed for the weekend.

This weekend the Kelly Walsh wrestling team goes for its first state championship in program history at the 2019 Wyoming State High School Wrestling Championships in Casper Events Center. The Trojans are favored, entering the tournament as the No. 1 overall team in Class 4A. It’s an entirely new situation to the program and to Peak, who was tasked with rebuilding a program down on its luck.

The Trojans were competing for second-to-last place in Class 4A when Peak applied for the head coaching job. He had led Alliance, Nebraska, from 42nd to 24th to 12th to 5th at state in his first four seasons. The Bulldogs dropped back to 13th in his final year, but by that time Peak was the head coach at the kids club, middle school and high school levels.

Peak brought that up to the Kelly Walsh administration during the hiring process. That excited those who had been witness to the state of the Trojans’ program. He accepted the job and went right to work.

“That was the plan, to completely gut the program and start over,” Peak said. “For lack of a better term, dump the current situation and start with new coaches, just start over.

“Just got to believe it can happen. There’s 1,600 kids in this school, gotta be able to find someone. Biggest damn school in Wyoming, there’s no reason we can’t be good.”

Peak described that first year’s team as “slim pickings” while waiting for one of his assistants, a holdover from the previous coaching staff, for other words about that team.

That first team had talent and worked hard enough to place 11th out of 12 teams in 2015. They placed five wrestlers, four of which were seniors. The Trojans placed four the next year, but finished last as a team with all their experience gone.

Peak, along with assistant coaches Michael Sims, Casey Schell and Perry McAfee, all got involved with Casper wrestling at the middle school level. Sims and Schell have since become very involved with wrestling at Centennial Middle School. They also started a summer wrestling camp that attracted prospective wrestlers. If the Trojans’ fortunes where to change, the coaches thought, they needed to begin there.

“When we got here we were very hopeful because we had a great coaching staff and we knew that the youth of Casper had some real promising kids coming up,” Peak said, “so we knew that we had to work hard and do the things that were going to want to make them come. And we did that. And they came.”

Jace Palmer was always going to go to Kelly Walsh. But through the summer workouts came Analu Benabise, twins Josh and Kole Kraus, Kevin Anderson and Noah Hone. Anderson was going to go to Natrona County as a freshman until attending a Kelly Walsh wrestling camp. Jesus Alvarado attended Midwest as a freshman but still attended classes in Casper as a result of the gas leak that closed Midwest’s school. He joined Kelly Walsh’s wrestling program because Midwest doesn’t offer wrestling.

“Being involved with the youth and reaching out, putting in the extra work and time, that’s what’s created this,” Peak said. “It’s been a total team effort.”

Kole Kraus said he attended Kelly Walsh because he felt the wrestling program was in better shape than Natrona County’s. He goes for his first state championship this weekend. Alvarado wanted to wrestle at Kelly Walsh. Junior standout Lane Jackson made his decision to attend Kelly Walsh with the intention of wrestling for the Trojans.

Last season could have been the year for the Trojans to win their first state championship, but a poor showing at regionals left them with bad seeding. The Trojans settled for silver, which tied the best finish in program history. That’s galvanized these Trojans as they stand just days away from possibly making history.

Some admitted they’ll likely be nervous on the Casper Events Center floor. Jackson felt the butterflies even talking about the environment. But then came the pinpoint eyes. The Trojans let one chance at history slide and they’re determined to give the program something it’s never seen before.

“It’s super cool that if we’re able to win state,” Jackson said, “then we’ll be the first team from Kelly Walsh to ever do that.”

ON THE VERGE: Kelly Walsh, No. 1 in the state, could win its first state championship in program history this weekend at the 2019 Wyoming State High School Wrestling Championships.

HE SAID IT: "That was the plan, to completely gut the program and start over." -- Peak.

Sheridan freshman is currently ranked No. 3 in Class 4A at 145 pounds.

Nearly a year removed from what he calls the greatest loss of his career, Hunter Goodwin’s hungry for more.

Kelly Walsh head wrestling coach Travis Peak and some of his wrestlers look at the Miller Cup Trophy after they defeated rival Natrona County in the annual dual on Feb. 7 at Jerry Dalton Gym in Casper.