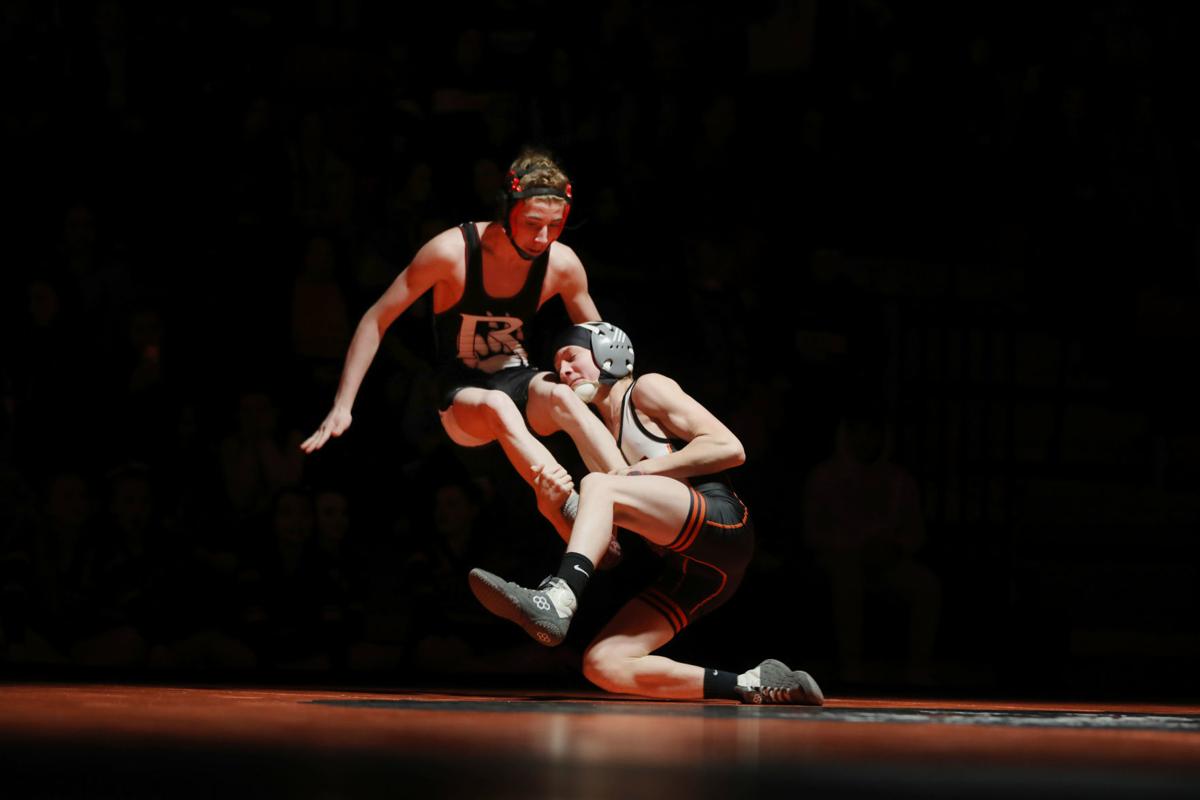 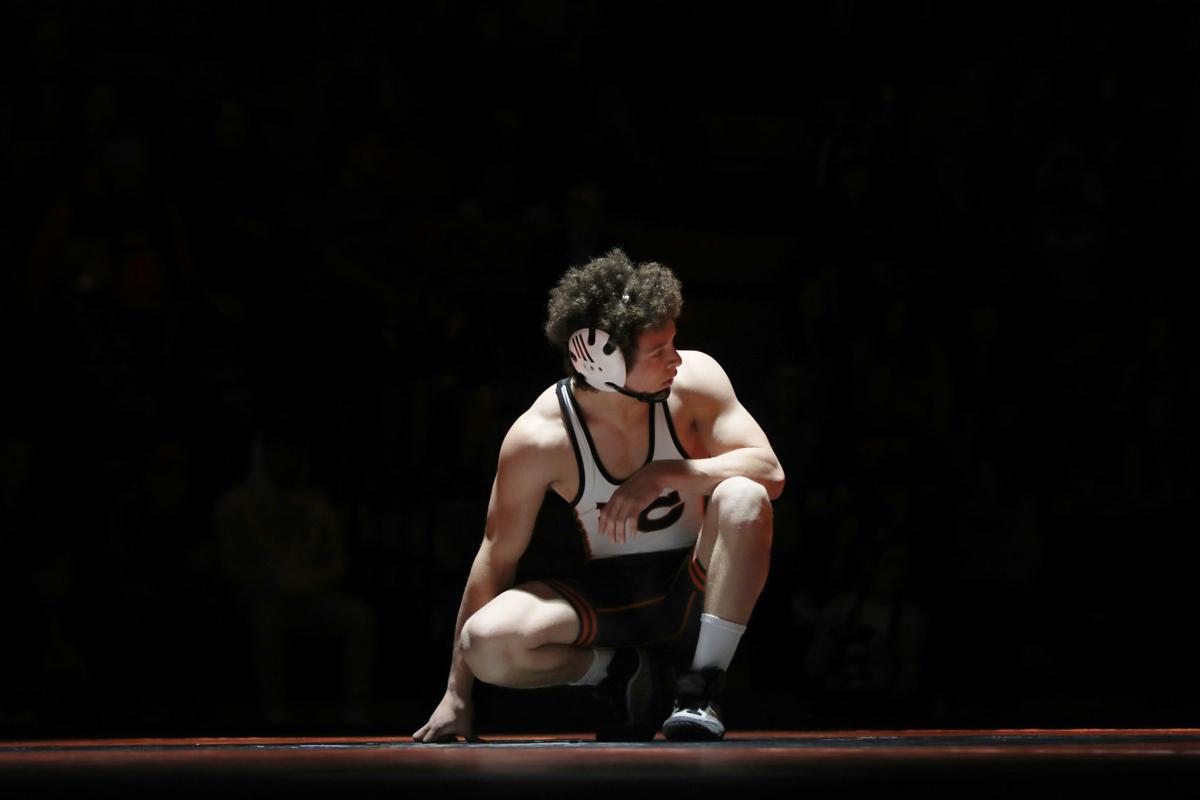 Cyruss Meeks from Natrona County catches his breath during an official timeout in his match against Riverton's Ridge Briggs on Thursday at Jerry Dalton Gym in Casper.

Replacing both of Natrona County’s state champions from a year ago wasn’t easy. But the Mustangs’ youthful lineup made Thursday night’s dual look easy.

Less than a week after tearing through Laramie at Jerry Dalton Gym, the Mustangs scored wins in 12 of the 14 matches to ease by Riverton with a 63-9 win that was as much a showcase for sophomore talent as it was a competitive dual.

“Astounding, exciting dual, especially towards the end,” Natrona County head coach Scott Russell said. “I like how aggressive we were and how we kept going for pins and staying on the offense, scoring points throughout the entire match. That’s what wrestling’s supposed to be about.”

NC senior Connor Worthen started the festivities with a tight 6-3 decision over Garrett Popkes. Both were late additions to their respective starting lineups at 160 pounds and wrestled even for the majority of the match until Worthen took a lead on a hand violation and then scored a decisive takedown in the third period to secure the opening win. That set the tone for the Mustangs going forward.

Sophomore Brendyn Nelson followed with a pinfall midway through the second period at 170 pounds, having successfully muscled his opponent shoulder-first straight to the mat. Nelson held a 5-1 advantage at that point. Another promising NC sophomore, Vince Genatone, continued his teammates’ hot start with a pin of his own in 61 seconds. Genatone set the tone with a powerful slam takedown less than 15 seconds into the match and finished it seconds later. Half of NC’s 12 wins came from sophomores.

Riverton’s Kaden Gantenbiein gave the Wolverines their first win by securing the cradle and scoring the pin early in the second period of the 195-pound match. He held a 2-0 lead into the second and immediately went for the cradle out of the reset. Then the Mustangs came battling back.

Blake Birkle, one of the Mustangs’ few seniors, helped the home side regain momentum with a grueling 3-0 decision at 220 pounds against Riverton’s Ricky Hoffman. The bout was scoreless until Birkle notched a takedown with less than 20 seconds remaining in the second period. He took a 3-0 lead into the final period and, after a stalling warning, successfully stayed in control the rest of the way. Natrona County junior D’Anthony Smith scored a forfeit win at heavyweight when Riverton left its heavyweight slot open after No. 3-ranked Kris Topaum was left out of the lineup.

“I put my best moves in and got him,” Tromble said. “Usually I like to go to the wing and get him on bottom. For my takedown I go single-leg.”

Kael Johnson, another NC sophomore, followed that with a 12-3 major decision at 113 pounds. Johnson consistently scored takedowns and built a 10-1 lead going into the final period but couldn’t secure the pin he sought. Junior Landon Roberts one-upped his teammate by notching a 32-second pinfall at 120 pounds, having earned the pin off his initial takedown. By that point the Mustangs led 40-6.

Riverton’s woes continued when NC junior Nathaniel Sausedo dominated his match, building a 14-0 lead after the opening period. He casually scored the technical fall victory by escaping off the reset just 7 seconds into the second period. Junior Kyler Henderson continued NC’s strong-armed winning ways immediately after with a pinfall almost midway through the third period. Sophomore Billy Brenton notched another pin for the Mustangs, hog-tying his opponent in 55 seconds.

Class 3A defending champion and top-ranked Ridge Briggs scored a 6-4 decision over NC’s Cyruss Meeks in the anticipated 145-pound match. Meeks, the No. 2-ranked 145-pounder in 4A, nearly drew level with an early third-period takedown but the official ruled them out of bounds. Briggs earned another takedown and held on the rest of the way.

Sophomore Kaeden Wilcox put a bow on the night for the Mustangs by scoring a pinfall over Trayton Hyatt, the No. 2-ranked 152-pounder in 3A. Wilcox neutralized Hyatt with a first-period takedown and then a continuous quest for a pin. Hyatt drew even on a reversal midway through the third period only for Wilcox to reverse that and score the pin with 28 seconds left.

SOPH SHOWING: Half of Natrona County's 12 wins on Thursday came from sophomores.

HE SAID IT: "I like how aggressive we were and how we kept going for pins and staying on the offense, scoring points throughout the entire match. That's what wrestling's supposed to be about." -- NC head coach Scott Russell.

Defending state champs are coming off a tournament title at the Shane Shatto Memorial Invite.

Cyruss Meeks from Natrona County catches his breath during an official timeout in his match against Riverton's Ridge Briggs on Thursday at Jerry Dalton Gym in Casper.