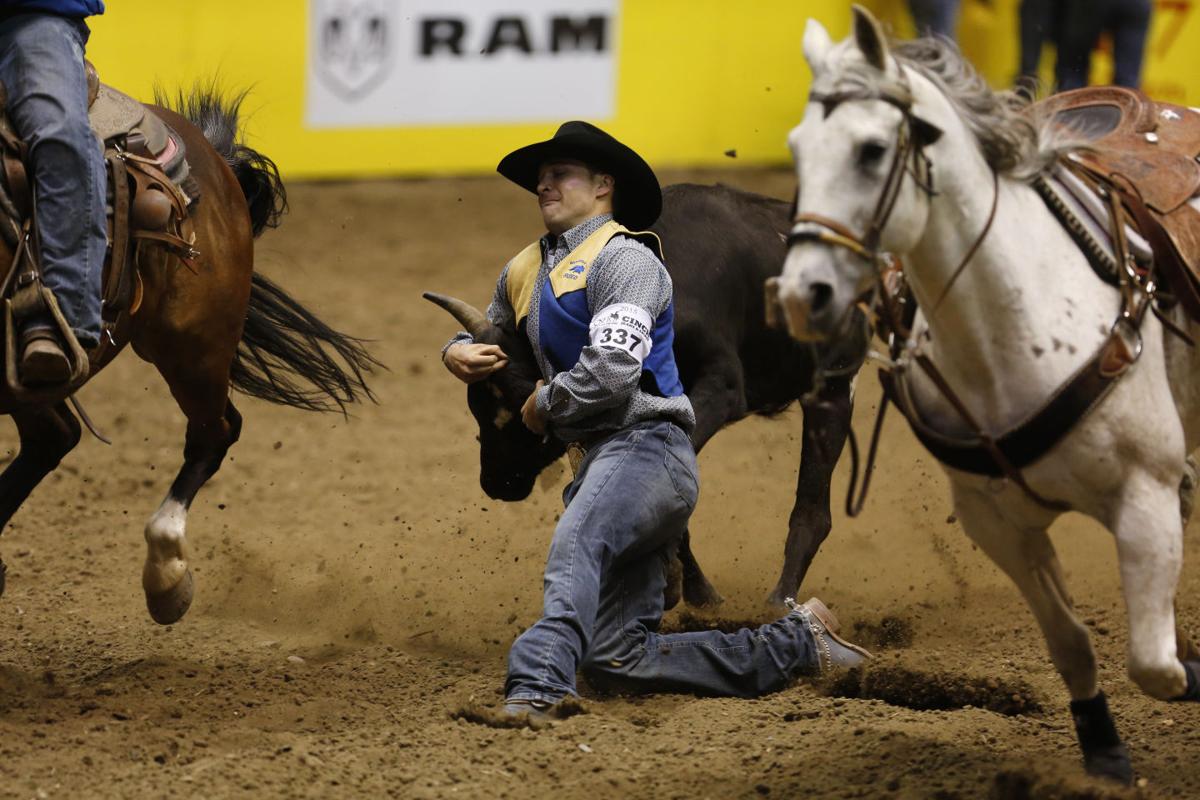 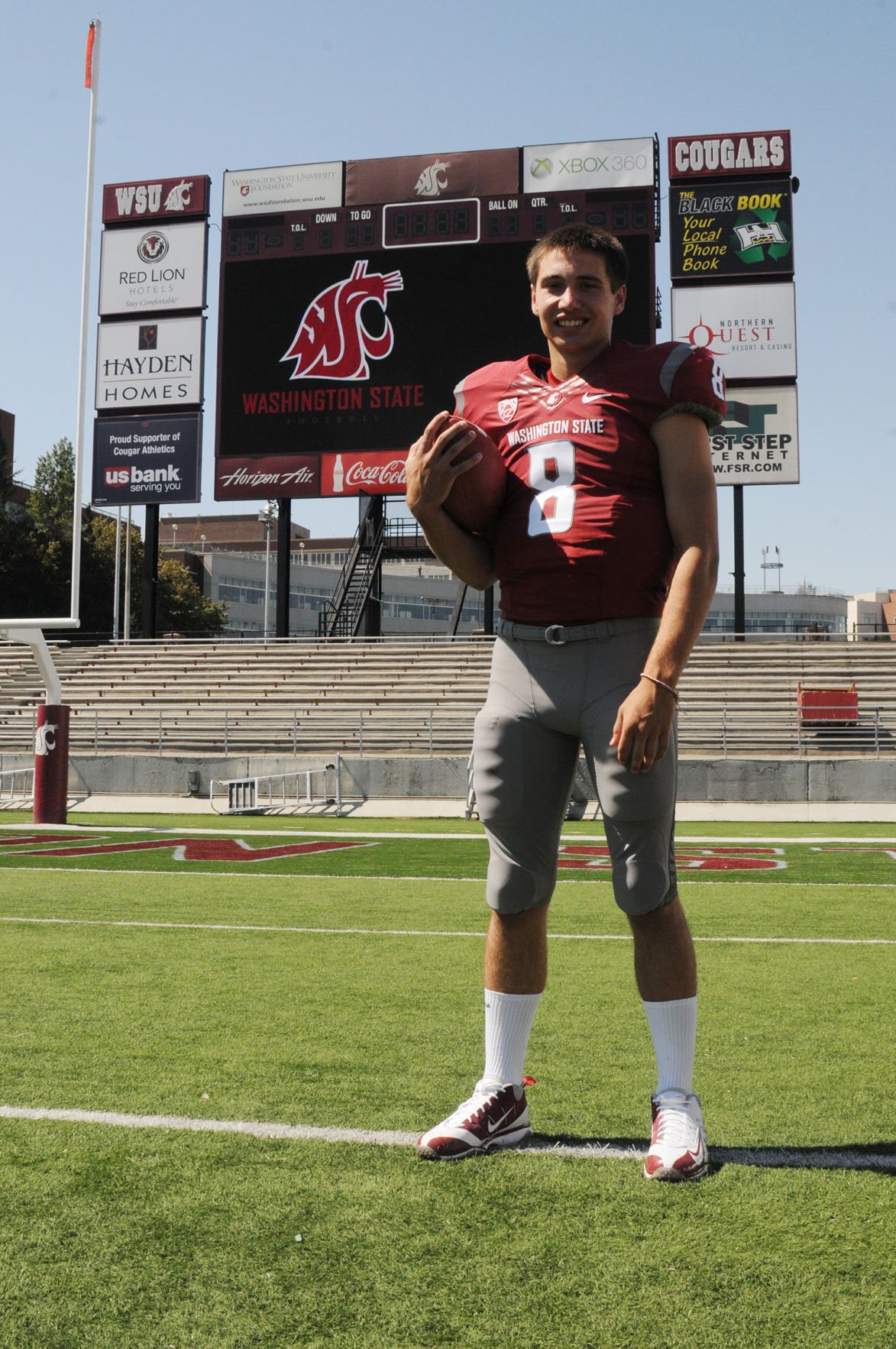 Saturday evening’s short go-round of the College National Finals Rodeo is the last place Jesse Brown expected to end up.

“Even a year ago, I didn’t really think I’d be here,” the Montana State steer wrestler said. “It’s kind of crazy.

A year ago, Brown searched for a new school after spending three years at Washington State, a place he landed as a walk-on quarterback following a standout high school career.

A year ago, he began taking rodeo seriously. Finally.

“I don’t know if the kid had jumped 20 steers when he came,” Montana State coach Mike True said.

But it seems Brown grew up destined for this moment, as much as he fought it throughout his childhood.

He was raised on a ranch in Baker City, Oregon, part of a family heavily involved with rodeo.

“We always made fun of him because he’d help us on the ranch, but he didn’t want anything to do with rodeo,” his father, Jim, said with a laugh.

Instead, Jesse was a three-sport star and wound up five hours away as an NCAA Division I athlete.

When he grew sick of football, he turned to the one sport he had never seriously considered: rodeo.

“Well, I think we were both shocked,” Jim said of he and his wife Vicki's reaction. “He was just playing football and called one night and said, ‘I’ve had enough. I’m going to go to Montana and be a cowboy.’”

Baker City, a town of 10,000, is divided by the Powder River and sits in a valley between the Elkhorn Mountains to the west and the Wallowa Mountains to the east. Jesse Brown — 6-foot-2 and 200 pounds with dark brown hair and an infectious smile — became a golden boy throughout high school.

As a senior in 2010, Jesse garnered Class 4A offensive player of the year honors from The Oregonian after leading Baker High School to its first state title in football.

“Basketball was his passion, but he was a state champion playing football,” Jim said. “He was the quarterback for four years.”

Yet, while growing up, Jesse also became a black sheep of sorts as well.

Jim competed at the College National Finals Rodeo with Blue Mountain Community College during the 1970s and later rode saddle broncs professionally. His mother, Vicki, rode barrel horses. Even his younger sister, Allison, took to rodeo at an early age and now competes for Blue Mountain.

“We both rodeoed, and when he was real little I still rodeoed a little bit,” Jim said. “He was around it, but he always played ball. He played three sports (the other being baseball) all the way through high school.”

Jesse hoped for a basketball scholarship offer, but it never came. He had a few lower-level offers in football, but if he was going to play college sports, it was going to be on the biggest stage.

So, he moved to Pullman, Washington, instead, becoming a Cougar and living out his dream. He redshirted as a freshman and never could carve out regular playing time over the next two years, while his parents remained hands-off.

“My mom and my dad, they know horses,” he said. “They didn’t know much about football and they couldn’t really help me out then and just let me do it.”

After the end of the 2013 season, Brown decided to trade in his football cleats for cowboy boots. He searched for something competitive and still as physical as football. Rodeo came as a natural choice.

“I was happier because of the concussions and politics of team sports,” Vicki said. “It’s really tough.”

It also meant moving out of Washington, which boasts zero four-year universities with rodeo teams.

Jesse visited the University of Montana and liked it. Jim thought that’s where he’d finish his degree — and become the first to do so from the Brown family.

Then a pair of family friends in professional steer wrestlers Blake and Trevor Knowles called. Blake ranks 13th in the 2015 world steer wrestling standings, while Trevor is 22nd.

“They told us Montana State was the place to be,” Jim said.

Along with True’s expertise, Montana State offered a perfect fit for Brown in assistant coach Beau Clark. And that’s no exaggeration.

Clark ranks eighth in the world steer wrestling standings and is a fount of knowledge about the sport. The kicker is that he played football for Montana State from 2000-04 before beginning his pro rodeo career.

“Beau has been a huge factor in Jesse’s progress,” True said. “He’s been a great mentor for him and great coach. It’s been a really nice combination.”

Added Vicki: “There’s a special bond between them.”

The pair understand each other well, and their common ground has helped Jesse develop rapidly as a steer wrestler.

“I think we definitely have a connection as far as when we talk about how to practice, he understands how to work at something,” Clark said. “He can work at things one step at a time, not get frustrated, just keep moving forward.”

Admittedly, Jesse had his fair share of spills early on at Montana State.

He likens a big wreck in steer wrestling to taking a big hit from a blitzing linebacker in football.

“They’re similar,” he says. “It just depends on the situation.”

But Jesse’s learning curve is unlike any True has ever seen.

In his first full year of rodeo, he reached the CNFR by winning the Big Sky Region in steer wrestling with 1,019 points. And in his first of possibly three CNFRs (he has two years of eligibility remaining, but may only use one), he’s advanced to the short go. He also competed at the CNFR as a heeler in team roping.

“He’s the package,” True said. “He’s really, really green in rodeo, but he’s a tremendous physical athlete. He’s a really intelligent kid, he’s learned to work, he’s used to being coached, he misses nothing, he makes improvements, he’s not afraid to change things to get better — all those things that makes an athlete good in any sport and make them special. The physical tools are just the start. He has great physical tools: He’s really strong, he’s really quick. But he’s just a smart kid.”

Jesse recorded times of 9.6, 7.2 and 14.2 in his first three CNFR go-rounds with what True describes as “pigs,” or hard-luck steers.

He’s likely out of contention for a steer wrestling championship, but this is only the beginning for him.

True has been most impressed with Jesse’s horsemanship, which he says is usually the toughest part for new cowboys.

Going forward, Clark says “the sky is the limit” for Jesse. He could land on the pro rodeo circuit alongside Clark one day, if he chooses that path.

Jesse didn’t expect to reach this stage, but it’s one he’ll certainly have an opportunity to return to.

“The best thing about Jesse, I think, as far as a college rodeo athlete is he’ll stay in the moment,” Clark said. “He’s going to do well in school, get his degree, keep working at rodeo. That’s the whole idea of college rodeo: For them to go get their college degree and to excel in their sport while they’re there before they move on in life.”

FORMER COUGAR: After a standout career at Baker High School in Oregon, Brown landed at Washington State as a walk-on quarterback. He redshirted as a freshman and never carved out a regular role with the Cougars during his second and third seasons there.

RODEO, FINALLY: Despite growing up on a ranch with a rodeo-loving family, Brown kept to baseball, basketball and football throughout his childhood. When he elected to hang up his football cleats after the 2013 football season, he finally decided to begin his rodeo career.

QUICK STUDY: In his first full season of rodeo, Brown won the Big Sky Region steer wrestling title with 1,019 points and also qualified for the College National Finals Rodeo as a heeler in team roping. He has advanced to Saturday evening's short go-round in steer wrestling.

HE SAID IT: “He’s the package. He’s really, really green in rodeo, but he’s a tremendous physical athlete. He’s a really intelligent kid, he’s learned to work, he’s used to being coached, he misses nothing, he makes improvements, he’s not afraid to change things to get better — all those things that makes an athlete good in any sport and make them special. The physical tools are just the start. He has great physical tools: He’s really strong, he’s really quick. But he’s just a smart kid.” — Montana State coach Mike True

Four Wyomingites will compete in 2021 National Finals Rodeo in Vegas