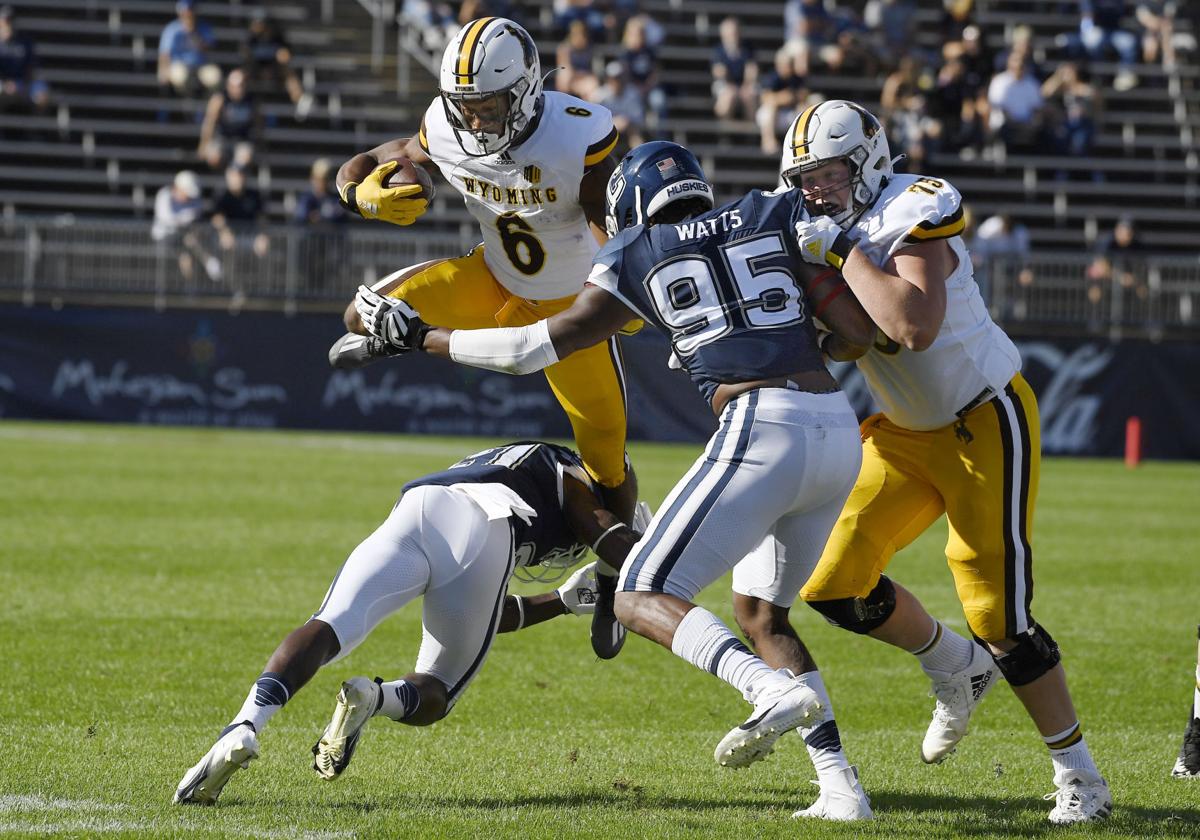 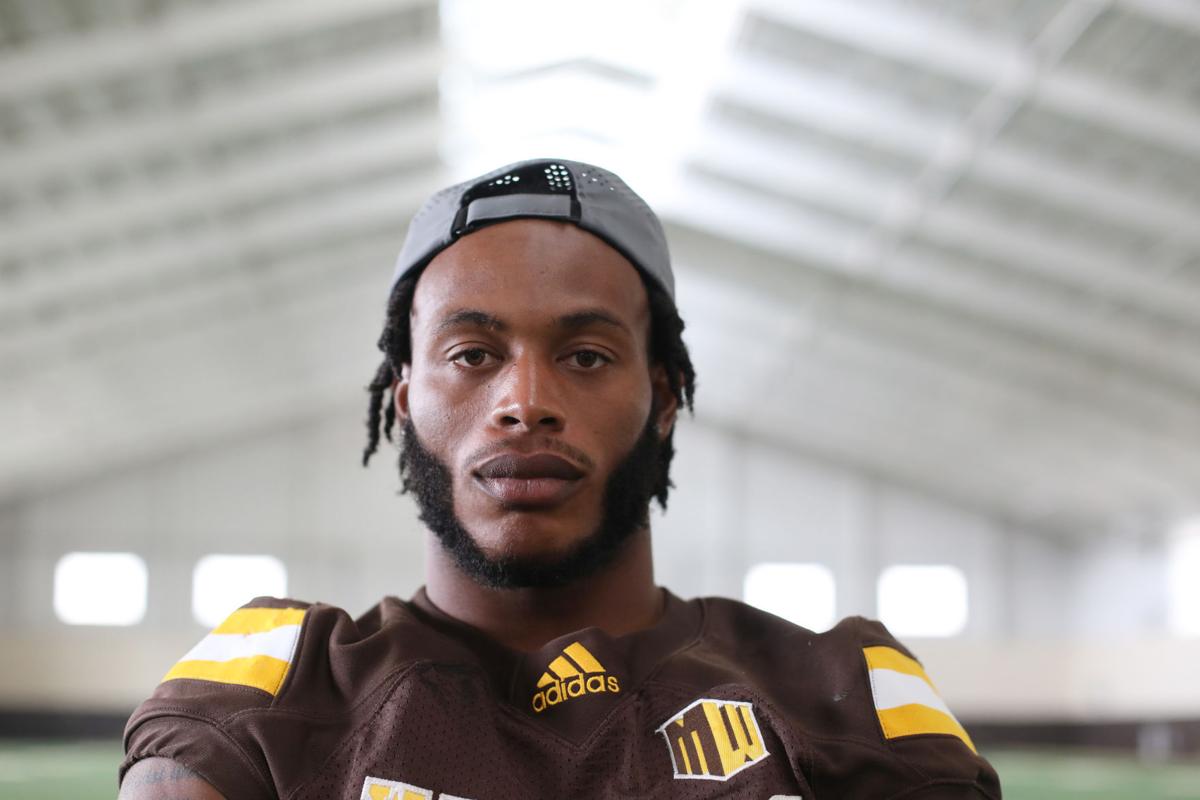 Running back Xazavian Valladay poses for a portrait at the University of Wyoming's Media Day on Aug. 6 in Laramie.

LARAMIE – This feels like a Xazavian Valladay game, doesn’t it?

Wyoming’s star running back has been solid this season, averaging 85.0 yards rushing with four touchdowns during the team’s 4-0 start.

During the 2018 meeting, UW was trailing 27-21 and facing a fourth down when backup quarterback Tyler Vander Waal found Valladay for a 12-yard gain to extend the go-ahead drive.

Valladay added his first career touchdown to punctuate the Pokes’ dramatic 35-27 win over the Falcons after Sean Chambers was injured in the first quarter at War Memorial Stadium.

“I remember it came down to the last couple drives,” Valladay said. “It was a hard-fought game in the snow and we came out with the victory.”

In the 2019 meeting, UW was without an injured Chambers for the entire game and the passing game suffered. Vander Waal and Levi Williams were a combined 10-for-18 passing for 111 yards with no touchdowns and two interceptions in a 20-6 loss at Falcon Stadium.

Air Force’s defense held Valladay to 38 yards on 14 carries (2.7 yards per attempt) after he gashed Colorado State for 154 yards and 5.7 yards per carry in the previous game.

The Cowboys did not get a chance to atone for the dreadful performance last season when the Falcons canceled their trip to Laramie due to COVID-19 issues. Of course, UW would have been without Chambers again and was still struggling mightily in the passing game.

“The last time we went down there, things didn’t go in our favor,” wide receiver Isaiah Neyor noted. “We’re coming back with a lot to go achieve and find a way to get this victory.”

UW head coach Craig Bohl’s team will have to give Air Force a taste of its own medicine to be successful.

“We need to be really physical and disciplined at the point of attack,” Bohl said. “We need to establish the line of scrimmage, we need to tackle well and we need to defend the pass well. So there’s a lot on our plate.”

Fullback Brad Roberts has rushed for 540 yards and five touchdowns, and quarterback Haaziq Daniels has added 419 yards and eight touchdowns through five games.

UW’s offense is hoping to counter Air Force’s top-ranked rushing attack with a balanced approach led by a healthy Chambers and a well-rested Valladay.

“Every time that we have the ball we have to drive down and score,” Valladay said. “We know the game’s gonna be very quick. It’s not going to be a usual game that we play because they run the ball a lot, almost every play.

“We know we have to be able to capitalize on the drives that we do have, control the clock and execute our game plan as best as we can.”

Titus Swen is averaging 5.0 yards a carry and 48.8 yards per game with two touchdowns. Chambers is the team’s third-leading rusher with 119 net yards and two touchdowns.

During UW’s 24-22 victory at UConn on Sept. 25, Valladay finished with 101 yards and a fourth-quarter touchdown. It was the 12th 100-yard rushing game of his career.

“This is one of those type of games where we just know what’s at stake,” Valladay said. “Not even talking about our record or anything, just disregarding that, it’s always a rivalry because of what those guys can do. They’re just very physical in the games I’ve played in the past, giving us a run for our money. Being able to execute in this game when we play them is something we’re looking forward to.”

X FACTOR: Xazavian Valladay, who made a key fourth-down conversion and scored his first career touchdown in Wyoming's victory over Air Force in 2018, is looking to carry his team to a victory Saturday at Falcon Stadium, where he was bottled up during a loss in 2019.

FIGHT FIRE WITH FIRE: A strong performance by Valladay, the Mountain West's leading rusher the past two seasons, would help the Cowboys keep Air Force and its top-ranked rushing offense off the field.

HE SAID IT: "They’re just very physical in the games I’ve played in the past, giving us a run for our money. Being able to execute in this game when we play them is something we’re looking forward to." -- Valladay.

2021 Heisman Trophy Market: Where is the value?

2021 Heisman Trophy Market: Where is the value?

Who should take over at LSU?

Who should take over at LSU?

LARAMIE – Craig Bohl didn’t choose the date for Wyoming’s bye week, but the head coach certainly isn’t complaining about the timing of this ye…

Linebacker is looking to make some big plays against the Falcons after a relatively quiet game at UConn.

Running back Xazavian Valladay poses for a portrait at the University of Wyoming's Media Day on Aug. 6 in Laramie.