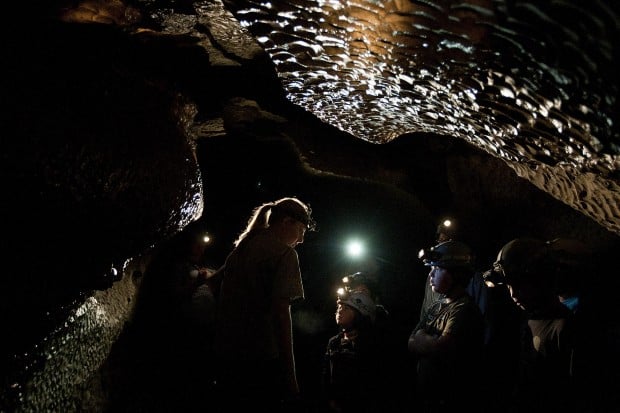 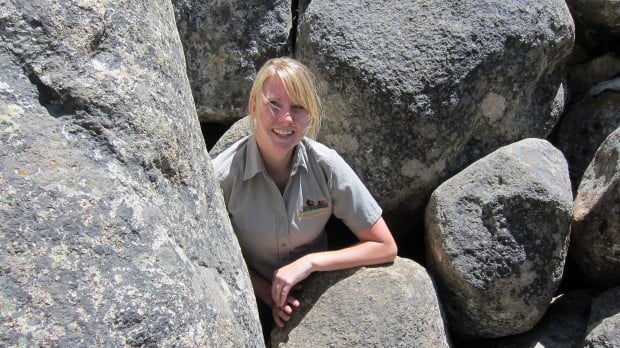 Sinks Canyon State Park employee Sarah Trembly disappears into the entrance of Boulder Choke cave. Park staffers will lead you through the cave with advance notice. 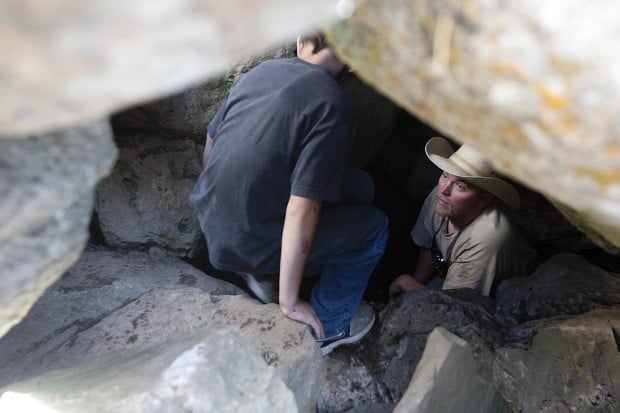 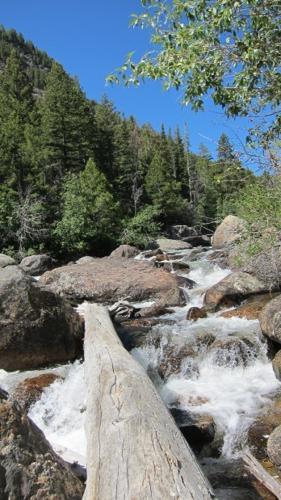 The Falls Trail follows the Middle Fork of the Popo Agie River to where the river drops into Sinks Canyon. There are many trails to hike in Sinks Canyon State Park, showcasing a variety of habitats.

Our guide, Sarah Trembly, met us at The Rise with two extra headlamps and two pairs of gloves.

We walked a short way toward The Sinks before she led us off-trail to a pile of rocks.

Then Sarah climbed in.

That small hole, seemingly nothing more than a gap between several boulders, was actually the entrance to the cave. Sarah called up for us to follow her down.

Sarah, a temporary park ranger, lead me and my 10-year-old son, Sammy, on a tour of Boulder Choke Cave at Sinks Canyon State Park in Lander.

Once inside the cave, we settled in an open room with a bit of sunlight still shining through above. It was a beautiful 55 or so degrees, a temperature it stays all year long.

The limestone cave extends 1,400 to 1,500 feet – at least that’s the amount that has been mapped and explored. How far you can go depends on how far the water has receded.

The water deposits trout into the cave that never find their way out again. Their offspring have adapted to the dark and are now colorless, though they still react to lights directed in the water. Sarah has seen the flashes of white swim away from her beams, though Sammy and I didn’t catch sight of one.

As we walked, crawled, or shimmied through the passage, we heard the water flowing either in front or beside us. It sounded like a crowd before the start of a concert, with a hundred voices bouncing off the walls and ceiling.

We stopped at a place where the water flowed from a room below us, but also pooled in front of us. Sarah told us to sit in the dark for a while, to see the absolute darkness.

The river chirped and gurgled. It laughed and hollered. I thought I could make out the words if I could just listen a little harder.

"Can we turn our lights on now?" Sammy asked.

We made our way back, spending no more than an hour underground.

Visit Sinks Canyon State Park
Sinks Canyon State Park sits at the base of the Southern Wind River Mountains. Its big draw is The Sinks, where the Middle Fork of the Popo Agie (Puh-po Shuh) River disappears underground at the mouth of a large cave, only to return more than two hours later at The Rise, just a quarter mile away.
It has 29 first-come first-served campsites, picnic areas, a playground, restrooms, drinking water and a visitors' center. You can fish -- but not in The Rise -- hike, climb rocks and view wildlife there.
If you go ...
When: The visitor's center is open 9 a.m. to 6 p.m. daily from Memorial Day through Labor Day. You can view The Sinks and The Rise year-round. Campgrounds open from mid-April to the end of October, depending on weather conditions.
Where: 3079 Sinks Canyon Road in Lander
Tickets: FREE admission; camping costs $6 per night for residents or $11 per night for nonresidents
Info: 307-332-3077 (visitors' center) or wyoparks.state.us
Tour Boulder Choke Cave
This multilevel limestone cave extends 1,400 to 1,500 feet.
It's closed to the public for safety reasons, but Sinks Canyon State Park staff members will lead you on a free tour with advance notice. Call the Sinks Canyon Visitor Center a week before your trip to arrange the tour, 307-332-3077.
It is closed from May 1 to Aug. 1 due to high water levels.

Wear clothes and sturdy shoes that you won’t mind coming out covered in mud. Bring gloves, at least two light sources (preferably a headlamp to keep your hands free), and knee pads if you have them. Crawling is the only way to advance through some passages.

You will have to maneuver through a narrow descent to get into the cave, but afterward you will have room to at least crawl on hands and knees. There are sections where you can stand up and walk.

See The Sinks and The Rise:
The canyon was named for The Sinks, the place where the Middle Fork of the Popo Agie River disappears into an impressive limestone cavern in a flurry of whitewater spray. The river reappears about a quarter mile away at the Rise.
In dye tests, red dye has been poured into the water at The Sinks, only to emerge more than two hours later at the Rise. Geologists believe that underground, the water must make its way through winding passages and small cracks in the Madison Limestone.

The Rise is a large pool, more than 20 feet deep in places, and home to large rainbow and brown trout.

Trout swim upstream to spawn, looking for gravel beds to deposit their eggs. But The Rise is a natural barrier, preventing them from going farther, and the trout tend to congregate. Many stay because visitors feed them pellets at 25 cents per handful. The area has been closed since 1920 to fishing, so it gives the trout the opportunity to get up to 8 to 12 pounds.

Park at the visitors center and follow the signs to both the Sinks and the Rise. A concrete trail connects the two areas.

Cheney criticized Hageman for her views surrounding the 2020 election. Hageman, in turn, knocked Cheney for her work on the Jan. 6 committee.

A hiker was life-flighted from northwestern Wyoming on Monday after being mauled by a grizzly bear.

The Wyoming Highway Patrol said the investigation is ongoing and could not release any information.

A flash flood emergency is in effect in the Lingle area, after a canal breach west of town.

He was transported to the Eastern Idaho Regional Medical Center with an injury to his arm.

Sheridan College, WyomingPBS and Wyoming Public Radio are co-hosting a debate for one of the most closely watched midterm races in the nation, but voters will not be allowed to attend in person due to security concerns.

Woman gored by bison in Yellowstone. Incident is second goring this week

A bull bison gored a women in Yellowstone National Park on Wednesday.

A Wyoming State Bar panel found she violated two rules of professional conduct in a 2020 lawsuit between two corporations that ran a Cheyenne gym modeled after the TV show “American Ninja Warrior.”

Sinks Canyon State Park employee Sarah Trembly disappears into the entrance of Boulder Choke cave. Park staffers will lead you through the cave with advance notice.

The Falls Trail follows the Middle Fork of the Popo Agie River to where the river drops into Sinks Canyon. There are many trails to hike in Sinks Canyon State Park, showcasing a variety of habitats.