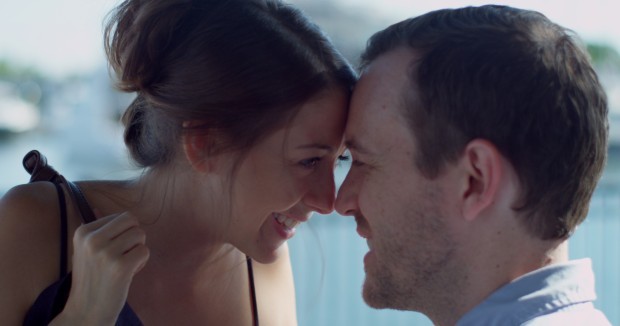 Devin Sanchez of Casper and Michael Ferrell star as "Ashley" and "Brian" in the romantic comedy "Twenty Million People." 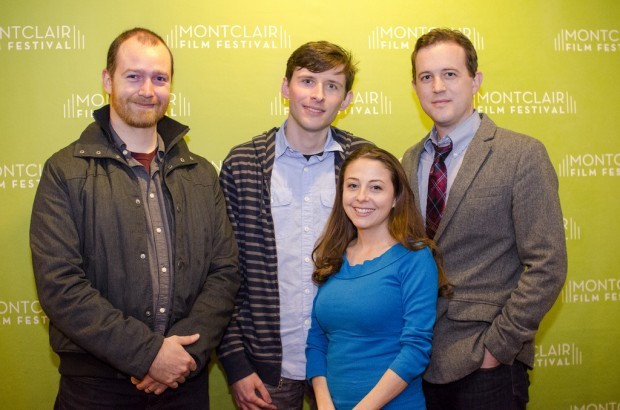 "Twenty Million People" had a film crew of four. They are show here at the Montclair Film Festival. From left to right: Paul Rondeau, Chris Prine, Devin Sanchez and Michael Ferrell.

Devin Sanchez has been hanged. She has stabbed people. She has been driven into furniture on a sidewalk. Now the Casper native can add award winning producer and actress to her film resume.

Sanchez stars in “Twenty Million People,” a romantic comedy making the rounds of the film festival circuit. The film received top billing at this year’s Maryland International and the Cape Fear film festivals, as well as best home grown feature film at the Garden State Film Festival. It has also shown at seven other festivals, including the Cinequest (San Jose, Calif.), Seattle and Manhattan film festivals.

“I feel like I’m in a band,” Sanchez said in phone interview prior to the movie’s showing in Casper on Monday. “I’m on tour with my movie.”

“Twenty Million People” follows the trials and tribulations of Brian, a recently love struck comedian played by Michael Ferrell. His only problem? He can’t find his new girlfriend, Ashley (played by Sanchez). She doesn’t return his phone calls or his text messages, and Brian embarks on a journey across New York City to find her.

The film’s success marks a dizzying ascent for its makers, who produced it for less than $100,000 and completed many of the tasks usually done by other members of a film crew. The triumvirate of Sanchez, Ferrell and Chris Prine, produced, acted and cast the film. They made call lists, developed schedules, found locations for filming and assisted Ferrell in directing.

Sanchez is a graduate of Natrona County High School, and she wanted to bring the film home to show that anyone can make movies.

“Being from Casper, I never thought I could move to New York,” she said. “I did it. It’s been a struggle. I’m not famous or anything, but I did make a feature film.”

Sanchez hopes “Twenty Million People” represents a new chapter in her career, one with more acting and, perhaps, producing roles. Since graduating from the University of Wyoming and moving to New York eight years ago, her career has primarily been as a stunt woman.

Her first stunt was in a low budget horror film about a child killer. The film’s creators did not want the young actor to be involved in the murder scenes so Sanchez donned a mask, which was conveniently worn by the killer during a murder, and stabbed his victims to death. Her stunts have since included a car accident in “The Sitter,” a comedy starring Jonah Hill, and a hanging in “Sinister,” a thriller starring Ethan Hawke.

For Sanchez, stunts are a way to make a living and avoid waiting tables like so many other aspiring actors in New York.

“Stunt double is more my survival job,” she said. “Some people wait tables, I try not to kill myself on set.

“Twenty Million People” is not Sanchez’s first starring role. She starred in “Stoop Sale,” a web series she also produced with Farrell, and appeared in the 2011 film “Headshots” and 2006 TV movie “Temps.” It is, however, her first film to see some success.

Sanchez and her fellow filmmakers are now looking to secure a distribution deal for the movie. Learning the business side of the film industry has been a challenge, she admitted. She would rather be involved be in the creative side. But if all goes well, she’ll able to leave the hangings, car accidents and stabbings behind.

* What: showing of "Twenty Million People." A Q&A with the filmmakers will follow the showing of the movie.

Around Wyo: Arts and Entertainment

The Sound Check and Beer, Brats and Bluegrass music festivals take the stage this weekend, "Exhibit This" shows in Casper and a Wyoming actres…

Devin Sanchez of Casper and Michael Ferrell star as "Ashley" and "Brian" in the romantic comedy "Twenty Million People."

"Twenty Million People" had a film crew of four. They are show here at the Montclair Film Festival. From left to right: Paul Rondeau, Chris Prine, Devin Sanchez and Michael Ferrell.