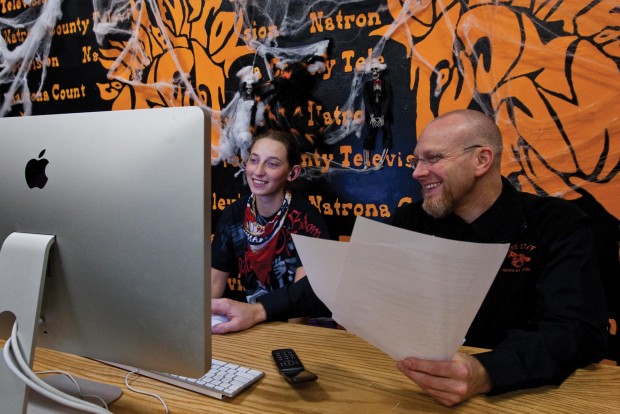 Audio visual production teacher Lance Madzey, right, reads through Natrona County High School senior Elise Jones’ screenplay during class on Wednesday afternoon. Madzey’s class inspired Jordan McKim to go into the film industry and McKim now works on the set of ‘The Walking Dead.’ He is the latest in a string of Madzey students to start careers in the film business. 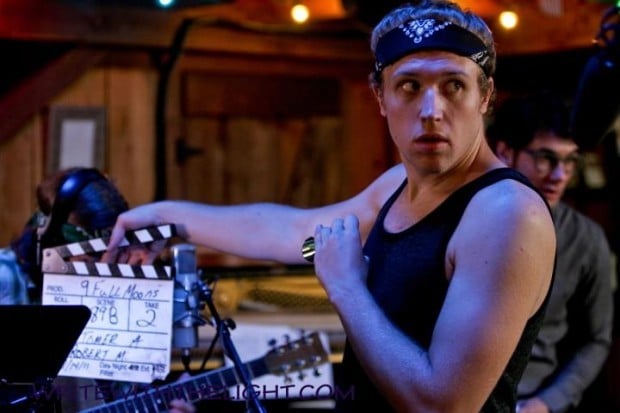 Jordan McKim is shown on the set of ‘9 Full Moons,’ a movie he worked on last year. McKim is now a production assistant on AMC’s ‘The Walking Dead.’ 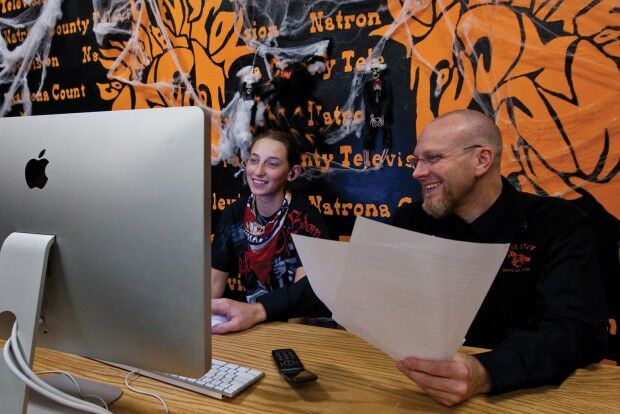 Natrona County High School film and TV teacher Lance Madzey, right, reads through senior Elise Jones’ screenplay during class in October 2012. Madzey is leaving the school after 26 years for a job in Vermont.

“Sometimes you don’t realize you’re standing in a puddle of fake blood and you start walking around and you’ve left red footprints everywhere,” said McKim on a telephone interview from Atlanta, Ga.

McKim, 24, formerly of Casper, is a production assistant on perhaps the biggest television show in America. “The Walking Dead,” AMC’s drama about a small band of survivors in a world overrun by zombies, made cable television history two weeks ago. Some 10.9 million viewers watched the premiere of the show’s third season, the largest audience ever to watch a single episode of a cable television drama.

As a production assistant, McKim’s job is to work with the show’s actors to make sure all runs smoothly. He ensures cast members are where they need to be, for example, and that everyone has their lines.

“Actors are like children, so you got to make sure they aren’t wandering off into their own little world,” McKim said.

Get distracted and next thing you know “they’re two blocks down the road from where they’re suppose to be and you’re like ‘How did you get here?’ And they don’t even know because they’re going over their lines,” he said.

“I love it all, being able to go to a job where there are cameras, lights, actors – and zombies.”

McKim is just the latest Casper native to find success in the film industry. Some have worked in television, others in movies, others in commercials. Some work on the creative side — filming and making the actual scenes that appear on the screen — while others work on the production side — making sure the set works the way it should.

“Lance is ... probably the most singly influential person on my career because he is the one who started me out,” said Lucas Lee Graham in a recent telephone interview from Los Angeles.

Lee Graham was the director of photography for the independent film, “Escape from Tomorrow,” which will premiere at Hollywood’s famous Arc Light Theater later this month. He also worked on “Pasadena,” a film starring Peter Bogdanovich and Cheryl Hines, which will be released next year.

Lee Graham remembers Madzey as a teacher totally dedicated to his students.

“He would stay after school. The first time I was (in his class) I would stay after an hour every day working on my projects,” Lee Graham said. “Lance really facilitates that kind of passion and that’s the real secret to why there are so many of us.”

Madzey can rattle off his students’ accomplishments with surprising speed: Patrick Tempest did sound work for the game show “Deal or No Deal” and the FX series, “The Shield”; Aubrey Murdock did post-production work at Google; Brad Cowan became the head editor of Rotary International, overseeing the production of documentaries. The list goes on.

“I think every teacher hopes their students succeed,” Madzey said. “That is one of the rewarding things about teaching, to see your students succeed much further than you thought they would.

“Casper, we’re pretty isolated in a lot of ways. We’re in the state with the least population, which means we have a small talent pool. To get a student to university (or) up to Hollywood – it just doesn’t happen.”

McKim remembers the moment he decided he wanted to make films: He was sitting in the American Theater waiting to see his film flash on the big screen of the Wyoming Statewide Short Film Festival.

“When I actually saw something that I did put on the big screen, given it was just a bunch of friends snowboarding for 10 or 12 minutes, it just sort of clicked,” he said.

McKim graduated Natrona County High School in 2006 and enrolled at Casper College. But he knew he wanted to work in the film industry. He was bored.

Visiting a friend, he stopped by the Los Angeles Film School and decided to enroll. He graduated with a degree in film science in 2010.

McKim took any job that came his way, working in the camera department on a number of independent films before switching to commercials.

“It is a very competitive and hard industry. There are times when you don’t know where your next job is going to be,” he said.

McKim landed a job on the set of “Home Run,” a Christian film about a ballplayer struggling with alcoholism. His boss was also the first assistant director on the second season of “The Walking Dead.”

McKim called to say he’d be more than willing to drive to L.A. and work on the show. A week and a half before filming started in May, she called him back to tell him to get out there.

McKim will work on “The Walking Dead” until filming concludes in December. He then hopes to land a job on an Arnold Schwarzenegger film shooting in Georgia. Beyond that, he dreams of one day becoming a creative producer, the person who finds the people and money needed to put a movie together.

Right now, he is happy to be where he is, one of biggest shows in America. He isn’t allowed to talk about the details of the show, per his contract with AMC, but said he wakes up every morning looking forward to seeing what the directors have planned for the day.

“Are we going to make a head explode or cut a head in half or have a stunt guy get hit by a truck going 15 miles per hour?” McKim asked. “Not many people can go to work with a smile on their face. I mean, I work with zombies.”

Watch how zombie heads are destroyed on "The Walking Dead," airing at 7 p.m. Sundays on American Movie Classics, or AMC.

Junior Zach Nagy sat in front a microphone last week in the Natrona County High film classroom and prepared to use his “movie voice.”

Audio visual production teacher Lance Madzey, right, reads through Natrona County High School senior Elise Jones’ screenplay during class on Wednesday afternoon. Madzey’s class inspired Jordan McKim to go into the film industry and McKim now works on the set of ‘The Walking Dead.’ He is the latest in a string of Madzey students to start careers in the film business.

Jordan McKim is shown on the set of ‘9 Full Moons,’ a movie he worked on last year. McKim is now a production assistant on AMC’s ‘The Walking Dead.’

Natrona County High School film and TV teacher Lance Madzey, right, reads through senior Elise Jones’ screenplay during class in October 2012. Madzey is leaving the school after 26 years for a job in Vermont.