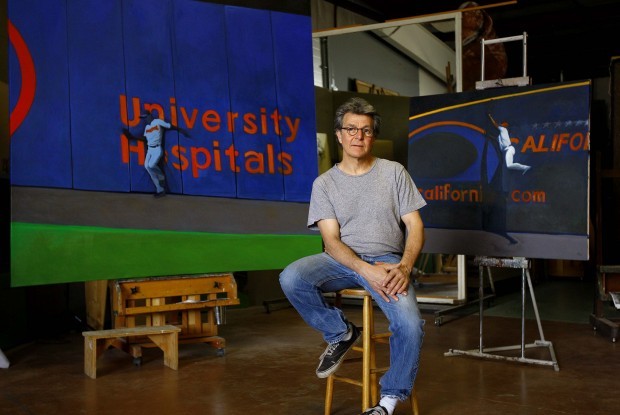 Powell artist John Giarrizzo poses in front of two pieces in his baseball series, ‘Between the Lines,’ that he’s currently working on Wednesday afternoon in Cody. Some of Giarrizzo’s baseball watercolors and oil paintings will be on display at the Nicolaysen Art Museum in Casper. 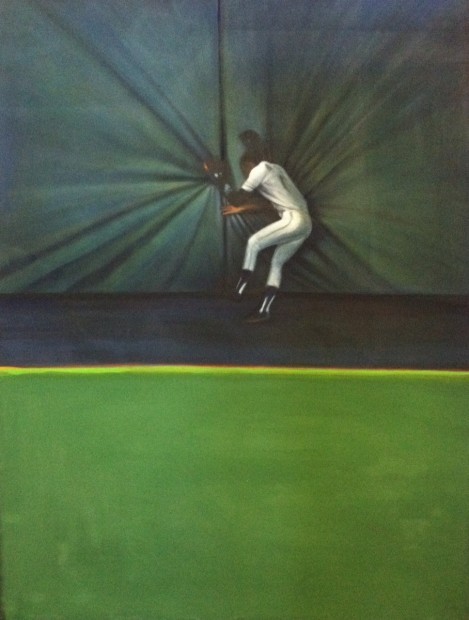 ‘At the Wall’ by John Giarrizzo

This is a montage of John Giarrizzo’s watercolors made by his son Gianluca Giarrizzo. 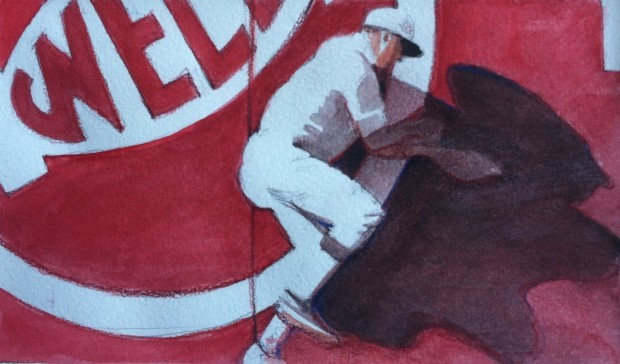 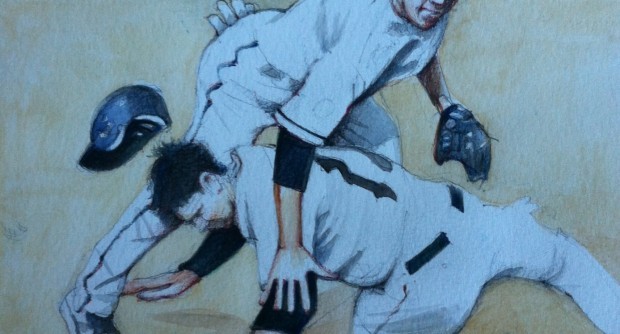 The small ones remind him of baseball cards. Powell painter John Giarrizzo has painted close to 100 4-by-6-inch watercolors, and he used to carry them in a box all stacked together.

Each showcases a player, or players, in varying positions.

The big pieces are different. Those are mostly 3-by-4-foot oil paintings of baseball players hitting the wall. Literally, hitting the wall. In none of them can a viewer tell if the player is catching the ball because that’s not the point, Giarrizzo said.

His series of small watercolors and larger oil paintings are all part of a body of work called “Between the Lines” that will be featured at the Nicolaysen Art Museum beginning May 31. It will still be on display during Nic Fest, the Nicolaysen’s summer art festival.

“I was really moved by them. They’re fantastic,” said the Nicolysen’s curator, Eric Wimmer. “I thought this would be a great show for the public. It’s baseball season. You have your lemonade and hot dogs and baseball.”

A metaphor for life

Giarrizzo started sketching baseball players in campgrounds and city parks across Wyoming. His son played in Little League, then Babe Ruth and finally Legion baseball. Giarrizzo coached when his son was young and spent his summers traveling from his home in Powell to baseball games all over the state.

Baseball was important to him as a child growing up in Cleveland, but it was his son playing that inspired his art.

He used baseball players as watercolor studies. His figures aren’t from any particular team, but uniforms may change from baggy to tight with the progression of baseball in the U.S.

He started the watercolors 10 years ago. Then one day, maybe three years ago, he painted an outfielder hitting the wall. He knew he’d found his work’s purpose.

“They’re about the human condition, and baseball happened to be the human subject I’m focused on,” he said.

The oil paintings are much larger, up to 7-by-7 feet. They’re also done in layers and layers of paint.

“Every time you come back to them, you see something different. To me, there’s definitely mysteriousness in there,” said Matt Jackson, manager of the Harry Jackson Museum in Cody. “Some you don’t know if they’re emerging from the wall or slamming into the wall.”

As a son, the younger Giarrizzo is amazed that his father dedicated himself to the teams. As an artist, his father is an inspiration. As a baseball player, he thinks his father captured the meaning of baseball.

“It highlights what baseball is about, the moment that something happens in the middle of such openness,” Gianluca Giarrizzo said. “A collision encompasses the totality of an experience that can be amazing, or a failure.”

Surrounded by a master

All of “Between the Lines” focuses on baseball players. In total, there are close to 120 pieces in the series.

Giarrizzo, who’s taught art at Northwest College in Powell for 32 years, tends to find a topic and focus.

Before the baseball players, he painted horses in his “Red Desert” series. Before that, it was people sitting in front of paintings by Italian artist Caravaggio. And before Italy, there were series on guardians and feed lots.

“I latch onto a theme and follow it until I lose interest in it,” he said. “The work is consistently figurative or representational. It’s not just abstract or traditional in that sense.”

It’s Giarrizzo’s artistic integrity that impresses Matt Jackson most. Giarrizzo paints for other people, but he also paints for himself and doesn’t let the commercial aspect creep into his work, Jackson said.

For months, Giarrizzo has been able to draw and paint surrounded by Harry Jackson’s art. Harry Jackson was a World War II Marine Corps combat artist and spent his life creating Western paintings and sculptures, abstract expressionism and realist pieces. He has work displayed around the world including in The Metropolitan Museum of Art, the Smithsonian American Art Museum and the Vatican.

“It’s generated a real supporter of my father’s work, and someone who feels it needs to stay in Wyoming,” he said.

Giarrizzo met Harry Jackson when he arrived in Cody decades ago. Working in the studio has given him a sense of responsibility to carry Harry Jackson’s dedication to art forward.

“I’m surrounded by the person who dedicated his life to the pursuit of being an artist,” Giarrizzo said. “He wasn’t a regional hack. He was the real thing, a world class painter and sculptor. Working in the studio is being reminded of the power of the art spirit.”

Harry Jackson took risks and experimented with his art. Working in his studio, Giarrizzo feels as though he’s been given permission to do the same.

Powell artist John Giarrizzo poses in front of two pieces in his baseball series, ‘Between the Lines,’ that he’s currently working on Wednesday afternoon in Cody. Some of Giarrizzo’s baseball watercolors and oil paintings will be on display at the Nicolaysen Art Museum in Casper.

‘At the Wall’ by John Giarrizzo

This is a montage of John Giarrizzo’s watercolors made by his son Gianluca Giarrizzo.