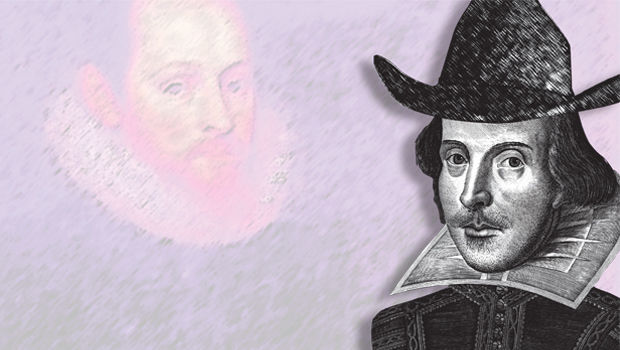 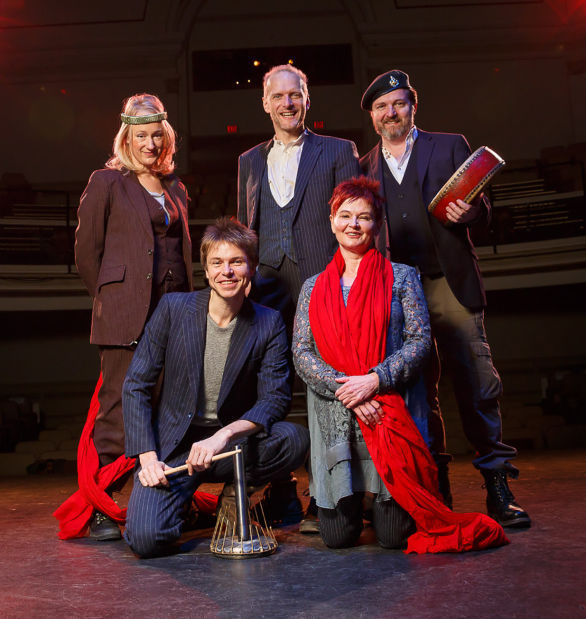 Actors from the London Stage in the “Macbeth” troupe are, top row from left, Joanna Bending, Michael Palmer and Charles Armstrong; and bottom from left, Ben Warwick and Annie Aldington. They will perform in Laramie and a handful of other Wyoming towns.

When “The Merchant of Venice” opens next week in Laramie, Quinn Scicluna will appear on stage as Shylock.

And Lorenzo. And Old Gobbo. Also, as a servant.

All of the actors – University of Wyoming students trained by London professionals – will play several roles. That’s not the only quirk. There will be no complicated set pieces. The props will all fit inside a large trunk.

And the show will be performed in small towns where a professional Shakespearean play is a rarity at best. But that’s the point of the Shakespeare Project, a program that starting next week will bring the Bard’s plays to all parts of the state, with help from a trio of directors from London.

“There is possibly an over reverence of Shakespeare. A fear of doing it wrong. A fear of all the rules,” said Roger May, one of the London actors who came to Wyoming in January to work with the UW students. “My job really is to try and break it down and say, ‘We're just telling a story.’ They are great stories. That’s why they have survived for 500, 600 years.

“This is what this is about. It’s about breaking this myth that Shakespeare is impossible and elitist. In actuality, he just tells fantastic stories.”

The “Merchant of Venice” is only one part of the Shakespeare Project, a massive theater collaboration between the University of Wyoming and Actors from the London Stage, with assistance from Wyoming PBS. It encompasses three student plays, a fourth performed by professionals from London, and Shakespeare-themed programming on Wyoming PBS.

The performances will begin Sunday in Laramie before moving to other parts of the state, including Sheridan, Lyman, Burns and Thermopolis.

“I think it is important to stage Shakespeare everywhere, and we are part of everywhere,” said Leigh Selting, the UW Theatre and Dance Department head who developed the project. “The opportunity to see world-class Shakespeare, with actors from London, and strong Shakespeare from UW students … is a wonderful opportunity for the state and the region.”

The program began when Selting and his faculty used money from an Eminent Artists-in-Residence program to bring Actors from the London Stage to Wyoming. He’d seen the group perform in the past and figured its unique take on Shakespeare – eschewing directors, massive sets and large companies – would provide a valuable opportunity for students.

Three London actors – May, Paul O’Mahony and Alinka Wright – agreed to travel to Laramie to direct the students. They visited last fall for auditions and returned in mid-January to begin training with 15 students chosen for the plays.

Each director is overseeing one play and five students. May’s group will put on “A Midsummer’s Night Dream; O’Mahony’s will present “Much Ado About Nothing” and Wright’s will perform “The Merchant of Venice.”

Using only five actors forces the performers to slide gracefully between characters. The actors rely on body language, their voices and props to help audience members differentiate between multiple characters portrayed by the same person.

You might expect such a set up would prove confusing to audiences. But the opposite is true, May said. That’s because the unique requirements force actors to make clear choices about their characters.

“In some ways, it’s much closer to what you would have originally got,” May said. “Nowadays, you have millions of dollars invested in big-budget musicals. This is much more about having the story.”

As Selting developed the project, Wyoming PBS General Manager Ruby Calvert was applying for a grant to do outreach surrounding the television series, “Shakespeare Uncovered.” Looking for ways to screen the program, she contacted the University of Wyoming and found the school was preparing a major project related to Shakespeare, but needed some money to take the student productions on the road.

Wyoming PBS earned the grant, paving the way for what the station is calling a “Shakespeare Explosion.” Student productions will play in 10 Wyoming communities next month, including Cheyenne, Wheatland and Green River. A professional troupe will also perform “Macbeth” in Laramie, Riverton, Lander and Jackson.

“It’s access to a professional play that they would not have an opportunity to see,” she said. “That’s what (got) us the grant. Our rural audiences --, some of these people are 250 miles away from a cultural center.”

Wheatland is one of those places. Theater options in the small farming town are limited to the community and high school variety, said Scicluna, the University of Wyoming student and actor. He grew up in Wheatland and said it would be unusual to have a professional troupe perform in town.

“The Merchant of Venice” will be performed March 10 at Wheatland High School – the same stage where Scicluna where he got his start. He’s hoping the play inspires a new love of theater in the community.

“Hopefully it will put theater on their radar,” he said, “and not just something to see on Broadway or in Denver.”

"Much Ado About Nothing"

"The Merchant of Venice"

"Much Ado About Nothing"

"The Merchant of Venice"

Actors from the London Stage in the “Macbeth” troupe are, top row from left, Joanna Bending, Michael Palmer and Charles Armstrong; and bottom from left, Ben Warwick and Annie Aldington. They will perform in Laramie and a handful of other Wyoming towns.